The different types of OD activities may be divided into the following classification:

OD for the Individual

Sensitivity Training: Sensitivity training was an early and fairly widespread OD technique. The purpose of sensitivity training sessions or T-groups (T for training) is to change the behaviour of the people through unstructured group interactions. In "T" groups, about ten participants are guided by a trained leader to increase their sensitivity and skills in handling interpersonal relationships. Members are brought together in a free and open environment, away from work places, in which participants discuss freely, aided by facilitator. No formal agenda is provided. The role of the facilitator is to create an opportunity for members to express their ideas, beliefs, and attitudes.

The objectives of sensitivity training are to provide the participants with increased awareness of their own behaviour and greater sensitivity to the behaviour of others.

Sensitivity training is less frequently used by organizations nowadays, and participants are usually screened to make sure that they can withstand the anxiety raised by a T group. Precautions are also taken to ensure that attendance is truly voluntary.

OD for Two or Three People

Transactional Analysis (TA): When two people interact with each other there results a social transaction. TA was pioneered by Eric Berne. TA encourages people to recognize the context of their communications. It encourages people to be more open and honest and to address the context of their messages. TA was popularised by Thomas Harris in the 1960s.

Transactional Analysis concentrates on styles and content of communication (transactions or messages) between people. It teaches people to send messages that are clear and responsible.

Transactional analysis attempts to reduce destructive communication habits or "games" in which the intent or full meaning of messages is obscured.

TA has found its acceptance everywhere because of several advantages associated with it.

Eric Berne uses simple day-to-day language to explain the dynamics of personality and its application for human development. His theory has the following components:

The parent ego-state - is "a set of feelings attitudes and behaviour patterns which resemble those of the parental figure". The parent ego state is authoritative, dogmatic, over protective, controlling, nurturing, critical, and righteous.

The Adult ego-state - is "an autonomous set of feelings, attitudes and behaviour patterns which are adapted to the current reality". The adult is the "thinking" ego state. In dealing with other people the adult state is characterised by fairness and objectivity.

The Child ego-state - is "a set of feelings, attitudes and behaviour patterns which are relics of the individual's own childhood". The child ego state represents the childish, dependent, and immature part of a person's personality.

Depending on the kinds of ego states involved, the interaction can be complimentary, crossed or ulterior.

The following four most popular elements in the script apparatus is discussed below:

Pay-off or curse: This is the way the parents tell the child to end its life. According to Berne, the script pay-off will not take effect unless it is accepted by the child.

Stoppers: Stoppers are injunctions or unfair negative commend from the parent.

Counter script: Counter script messages are in the forms of slogans; proverbs for example, work hard. These counter scripts determine the person's style.

Programme: Programme is what the parent teaches the child to do in order to live out the script.

OD for Teams and Groups

In process consultation, a consultant works with organization’s members to help them understand the dynamics of their working relationships in group or team situations. The consultant helps the group members to change the ways they work together and to develop the diagnostic and problem-solving skills they need for more effective problem solving.

Teams: Teams are also known by other terms such as empowered teams, self directed teams and self management teams. Katzenbach and Smith have defined a team as "a small number of people with complimentary skills who are committed to a common purpose, common performance goals, and an approach for which they held themselves mutually accountable". The most common types of teams are work teams, problem solving teams, management teams and virtual teams.

Work teams: Work teams are primarily concerned with the work done by the organization.

Their principal focus is on using the organization's resources effectively.

Problem-solving teams: Problem-solving teams are temporary teams established to attack specific problems in the work place. These teams generally offer recommendations for others to implement. In problem solving teams, members share ideas or offer suggestions on how work processes and methods can be improved.

Management teams: The primary job of management teams is to coach and counsel other teams to be self managing by making decisions within the teams. These teams consist of managers from various areas and coordinate work teams.

Virtual teams: Virtual teams are the teams that may never actually meet together in the same room – their activities take place on the computer via tele-conferencing and other electronic information systems. Virtual teams use computer technology to tie together physically dispersed members in order to achieve a common goal.

Groups: A work group is a group that interacts primarily to share information and to make decisions to help each member perform within his or her area of responsibility.

The work group is an even stronger source of satisfaction when members have similar attitudes and values. The work group provides group members with opportunities for interaction with each other.

Team Building: Team building utilizes high-interaction group activities to increase trust and openness among team members. Team building is a process of diagnosing and improving the effectiveness of a work group with particular attention to work procedures and inter-personal relationship within it.

A related approach, analyzes the activities, resource allocations, and relationships of a group or team to improve its effectiveness. This technique can be used, for example, to develop a sense of unity among members of a new committee. Team building can be directed at two different types of teams or working groups: an existing or permanent team made up of a manager and his or her employees, often called a family group; or a new group that either has been formed to solve a specific problem or has been created through a merger or other structural change in the organization, which we will call a special group.

For both kinds of groups, team-building activities aim at diagnosing barriers to effective team performance, improving task accomplishment, improving relationship between team members, and improving processes operative in the team, such as communication and task assignment. The table below summarizes these activities for both family and special groups. 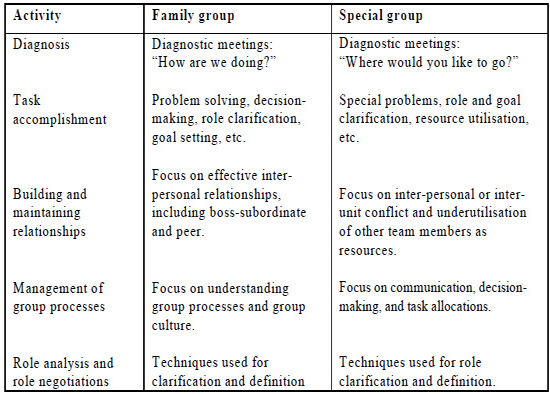 Diagnostic meetings may involve the total group or several subgroups and require only a brief time – a day or less – to identify strengths and problem areas. Actual team building requires a subsequent longer meeting, ideally held away from the workplace.

The consultant interviews participants beforehand and organizes the meetings around common themes. The group proceeds to examine the issues, rank them in order of importance, study their underlying dynamics, and decide on a course of action to bring about those changes perceived as necessary. A follow-up meeting at a later time may then evaluate the success of the action steps.

Inter-group development seeks to change the attitudes, stereotypes and perceptions that groups have of each other. Such stereotypes can have an obviously negative impact on the coordinative efforts between the departments. To permit an organization’s managers to assess the health of the organization and set up plans of action for improving it, the confrontation meeting may be used. This is a one-day meeting of all of an organization’s managers in which they discuss problems, analyze the underlying causes, and plan remedial actions. The confrontation meeting is typically used after a major organizational change, such as a merger or the introduction of a new technology.

Although there are several approaches for improving inter-group relations, the most sought after method is problem solving. In this method, each group meets independently to develop lists of its perception of itself, the other group and how it believes the other group perceives it. Differences are clearly articulated, and the groups look for the causes of disparities. Subgroups, with members from each of the conflicting groups, can now be created for further diagnosis and to begin to formulate possible alternative actions that will improve relations.

OD for the Total Organization

OD attempts to develop the whole organization so that it can respond to change effectively.

Change is so abundant in modern society that organizations need all their parts working together in order to solve problems. OD is a comprehensive programme that is intended to assure that all parts of the organization are well coordinated.

The survey feedback technique can be used to improve the operations of the total organization. It involves conducting attitude and other surveys and systematically reporting the results to organization members. Members then determine what actions need to be taken to solve the problems and exploit the opportunities uncovered in the surveys.

Everyone in an organization can participate in survey feedback. The data from the survey feedback is collected through a questionnaire and tabulated. The data so collected then become the springboard for identifying problems and clarifying issues that may be creating difficulties for people. 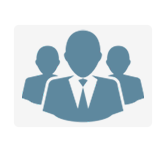