The relational model is the basis for any relational database management system (RDBMS). A relational model has three core components: a collection of objects or relations, operators that act on the objects or relations, and data integrity methods. In other words, it has a place to store the data, a way to create and retrieve the data, and a way to make sure that the data is logically consistent.

Relational Database A collection of tables that stores data without any assumptions as to how the data is related within the tables or between the tables.

A tablein a relational database, alternatively known as a relation, is a two-dimensional structure used to hold related information. A database consists of one or more related tables.

A rowin a table is a collection or instance of one thing, such as one employee or one line item on an invoice. A column contains all the information of a single type, and the piece of data at the intersection of a row and a column, a field, is the smallest piece of information that can be retrieved with the database's query language. (Oracle's query language, SQL, is the topic of "SQL*Plus and iSQL*Plus Basics.") For example, a table with information about employees might have a column called LAST_NAME that contains all of the employees' last names. Data is retrieved from a table by filtering on both the row and the column.

TableThe basic construct of a relational database that contains rows and columns of related data.

Note SQL, which stands for Structured Query Language, supports the database components in virtually every modern relational database system. SQL has been refined and improved by the American National Standards Institute (ANSI) for more than 20 years. As of Oracle9i, Oracle's SQL engine conforms to the ANSI SQL: 1999 (also known as SQL3) standard, as well as its own proprietary SQL syntax that existed in previous versions of Oracle. Until Oracle9i, only SQL:1992 (SQL2) syntax was fully supported. As of Oracle 10g, the Core SQL:2003 features are fully supported with a couple minor exceptions.

The examples throughout this book will focus on the hypothetical work of Scott Smith, database developer and entrepreneur. He just started a new widget company and wants to implement a few of the basic business functions using the Oracle relational database to manage his Human Resources (HR) department.

Note Most of Scott's employees were hired away from one of his previous employers, some of whom have over 20 years of experience in the field. As a hiring incentive, Scott has agreed to keep the new employees' original hire date in the new database.

RowA group of one or more data elements in a database table that describes a person, place, or thing.

You'll learn about database design in the following sections, but let's assume for the moment that the majority of the database design is completed and some tables need to be implemented. Scott creates the EMP table to hold the basic employee information, and it looks something like this 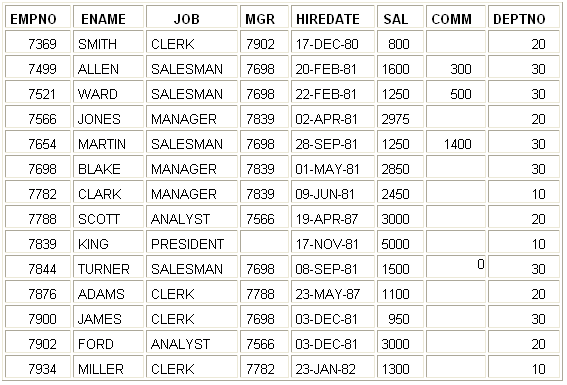 ColumnThe component of a database table that contains all of the data of the same name and type across all rows.

Notice that some fields in the Commission (COMM) and Manager (MGR) columns do not contain a value; they are blank. A relational database can enforce the rule that fields in a column may or may not be empty. (Chapter "Oracle Database Functions," covers the concept of empty, or NULL, values.) In this case, it makes sense for an employee who is not in the Sales department to have a blank Commission field. It also makes sense for the president of the company to have a blank Manager field, since that employee doesn't report to anyone.

On the other hand, none of the fields in the Employee Number (EMPNO) column are blank. The company always wants to assign an employee number to an employee, and that number must be different for each employee. One of the features of a relational database is that it can ensure that a value is entered into this column and that it is unique. The EMPNO column, in this case, is the primary key of the table.

FieldThe smallest piece of information that can be retrieved by the database query language. A field is found at the intersection of a row and a column in a database table.

Notice the different datatypes that are stored in the EMP table: numeric values, character or alphabetic values, and date values. The Oracle database also supports other variants of these types, plus new types created from these base types. Datatypes are discussed in more detail throughout the book.

Primary Key A column (or columns) in a table that makes the row in the table distinguishable from every other row in the same table.

As you might suspect, the DEPTNO column contains the department number for the employee. But how do you know what department name is associated with what number? Scott created the DEPT table to hold the descriptions for the department codes in the EMP table.

Foreign Key A column (or columns) in a table that draws its values from a primary or unique key column in another table. A foreign key assists in ensuring the data integrity of a table.

Before Scott created the actual tables in the database, he went through a design process known as data modeling. In this process, the developer conceptualizes and documents all the tables for the database. One of the common methods for modeling a database is called ERA, which stands for entities, relationships, and attributes. The database designer uses an application that can maintain entities, their attributes, and their relationships. In general, an entity corresponds to a table in the database, and the attributes of the entity correspond to columns of the table.

Data ModelingA process of defining the entities, attributes, and relationships between the entities in preparation for creating the physical database.

First, the designer identifies all of the entities within the scope of the database application. The entities are the persons, places, or things that are important to the organization and need to be tracked in the database. Entities will most likely translate neatly to database tables. For example, for the first version of Scott's widget company database, he identifies four entities: employees, departments, salary grades, and bonuses. These will become the EMP, DEPT, SALGRADE, and BONUS tables.

Associative Table A database table that stores the valid combinations of rows from two other tables and usually enforces a business rule. An associative table resolves a many-to-many relationship.

Defining the Relationships between Entities

In the widget company database, there is most likely a relationship between EMP and DEPT, but depending on the business rules, it is unlikely that the DEPT and SALGRADE entities are related. If the business rules were to restrict certain salary grades to certain departments, there would most likely be a new entity that defines the relationship between salary grades and departments. This entity would be known as an associative or intersection table and would contain the valid combinations of salary grades and departments.

In general, there are three types of relationships in a relational database:

Many-to-Many RelationshipA relationship type between tables in a relational database where one row of a given table may be related to many rows of another table, and vice versa. Many-to-many relationships are often resolved with an intermediate associative table.

Once the designer has defined the entity relationships, the next step is to assign the attributes to each entity. This is physically implemented using columns, as shown here for the SALGRADE table as derived from the salary grade entity. 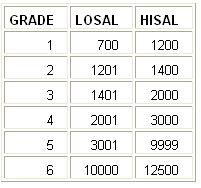 Iterate the Process: Are We There Yet?

After the entities, relationships, and attributes have been defined, the designer may iterate the data modeling many more times. When reviewing relationships, new entities may be discovered. For example, when discussing the widget inventory table and its relationship to a customer order, the need for a shipping restrictions table may arise.

Once the design process is complete, the physical database tables may be created. This is where the DBA usually steps in, although the DBA probably has attended some of the design meetings already! It's important for the DBA to be involved at some level in the design process to make sure that any concerns about processor speed, disk space, network traffic, and administration effort can be addressed promptly when it comes time to create the database.

Logical database design sessions should not involve physical implementation issues, but once the design has gone through an iteration or two, it's the DBA's job to bring the designers "down to earth." As a result, the design may need to be revisited to balance the ideal database implementation versus the realities of budgets and schedules.