An Oracle server consists of both a database and an instance. In Oracle terminology, database refers to only the physical files on disk. These are the files thatstore the data itself, the database state information in the control file, and the changes made to the data in the redo log files. The term instance refers to the Oracle processes and memory structures that reside in the server's memory and access an Oracle database on disk. One of the reasons for separating the concepts of a database and an instance is that a database may be shared by two or more different Oracle instances as part of an Oracle configuration that enhances the scalability, performance, and reliability of the Oracle server.

Database The collection of all physical files on disk that are associated with a single Oracle instance.

Instance The collection of memory structures and Oracle background processes that operates against an Oracle database.

The Oracle database is divided into increasingly smaller logical units to manage, store, and retrieve data efficiently and quickly. The illustration below shows the relationships between the logical structures of the database: tablespaces, segments, extents, and blocks.

Logical Structures Structures in an Oracle database that a database user would see, such as atable, as opposed to the underlying physical structures at the datafile level. 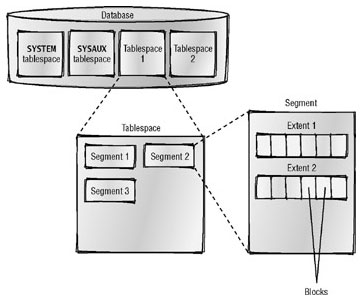 A tablespace is the highest level of logical objects in the database. A database consists of one or more tablespaces. A tablespace will frequently group together similar objects, such as tables, for a specific business area or a specific function. A particular tablespace can be reorganized, backed up, and so forth with minimal impact to other users whose data may be in other tablespaces.

Tablespace A logical grouping of database objects, usually to facilitate security, performance, or the availability of data base objects such as tables and indexes. A table space is composed of one or more data files on disk.

segment A set of extents allocated for a single type of object, such as a table.

The next-lowest logical grouping in a database is the extent. A segment groups one or more extents allocated for a specific type of object in the database. Segment 2 in the logical structure illustration consists of two extents. Note that an extent cannot be shared between two segments. Also, a segment, and subsequently an extent, cannot cross a tablespace boundary.

extent A contiguous group of blocks allocated foruse as part of a table, index, and so forth.

Database Block The smallest unit of allocation in an Oracle database. One or more database blocks compose a database extent.

A schema is another logical structure that can classify or group database objects. A schema has a one-to-one correspondence with a user account in the Oracle database, although some schemas may be designed to hold only objects that may be referenced by other database users. For instance, in the logical structure illustration, Segments 1 and 3 may be owned by the HR schema, while Segment 2 may be owned by the SCOTT schema.

schema A named group of objects associated with a particular user account, such as tables, indexes, functions, and so forth.

A schema is not directly related to a tablespace or any other logical storage structure; the objects that belong to a schema may be in many different tablespaces. Conversely, a tablespace may hold objects for many different schemas. A schema is a good way to group objects in the database for purposes ofsecurity and access control.

From the perspective of building queries and running reports, regular users don't need to know much about the underlying physical structure of the database on disk. However, DBAs do need to understand these database components.

Physical Structures Structures of an Oracle database, such as datafiles on disk, that are not directly manipulated by users of the database. Physical structures exist at the operating system level. 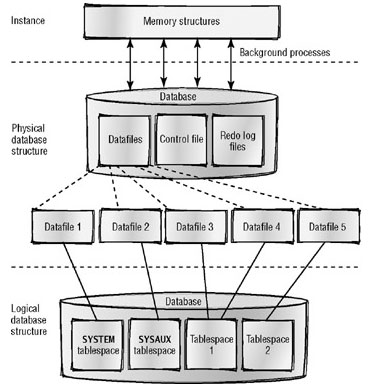 datafiles Files that contain all of the database data that the users of the database save and retrieve using SELECT and other DML statements. A tablespace comprises one or more datafiles.

redo log files Files that contain a record of all changes made to the data in both tables and indexes as well as changes to the database structures themselves. These files are used to recover changed data that was in memory at the time of a crash.

control file A file that records the physical structure of a database, the database name, and the names and locations of datafiles and redo log files.

The control file and redo log file contents do not map directly to any database objects, but their contents and status are available to the DBA by accessing virtual tables called data dictionary views, which are owned by the SYS schema.

The memory allocated to Oracle includes the following types of data:

This information is stored in three major areas: the System Global Area (SGA), the Program Global Area (PGA), and the Software Code Area. 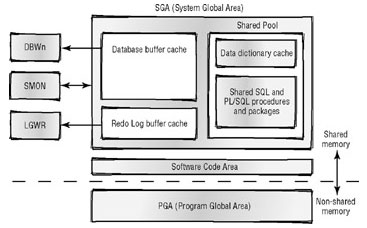 The overall memory allocated to Oracle can be divided into two categories: shared memory and nonshared memory. The SGA and the Software Code Area are shared among all database users. The PGA is considered nonshared. There is one dedicated PGA allocated for each user connected to the database.

The System Global Area (SGA) is the memory area that is shared by all connected users of the database. The SGA is broken down into many areas. We will discuss the areas that hold cached data blocks from database tables, recently executed SQL statements, and information on recent structural and data changes in the database. These areas are known as the database buffer cache, the shared pool, and the redo log buffer, respectively.

The database buffer cache holds copies of database blocks that have been recently read from or written to the database datafiles. The data cached here primarily includes table and index data, along with data that supports ROLLBACK statements.

Database Buffer Cache The memory structure in the SGA that holds the most recently used or written blocks of data.

Any database block can be in one of three states: dirty, free, or pinned.

LRU (least recently used) algorithm An algorithm used to determine when to reuse buffers in the database buffer cache that are not dirty or pinned. The less frequently a block is used, the more likely it is to be replaced with a new database block read from disk.

shared PoolAn area in the SGA that contains cached SQL and PL/SQL statements and cached tables owned by SYS.

Redo Log Buffer A buffer in the SGA that contains information pertaining to changes in the database.

The Program Global Area (PGA) belongs to one user process or connection to the database and is therefore considered nonsharable. It contains information specific to the session, and it can include sort space and information on the state of any SQL or PL/SQL statements that are currently active by the connection.

The Software Code Area is a shared area containing the Oracle program code or executables against the database. It can be shared by multiple database instances running against the same or different databases, and as a result, it saves a significant amount of memory on the server.

A process on a server is a section of a computer program in memory that performs a specific task. When the Oracle server starts, multiple processes are started on the server to perform various functions as part of the Oracle instance. While a detailed discussion of all Oracle background processes is beyond the scope of this book, we will discuss a few of the key processes: Database Writer (DBWn), Log Writer (LGWR), and System Monitor (SMON). These processes communicate with various areas of the SGA, such as the database buffer cache and the redo log buffer, as indicated in the earlier illustration.

Process An executing computer program in memory that performs a specific task.

There may be anywhere from one to 20 copies (DBW0 through DBW9 and DBWa through DBWj) of the Database Writer process running in an Oracle instance. As noted earlier in the section on the SGA, new and modified data is stored in buffers in the database buffer cache, which are marked as dirty buffers. At some point (for example, when the number of free buffers is low), these buffers need to be written out to disk, which is what the DBWn process does, allowing subsequent SELECT statements and other DML statements access to those buffers in the buffer cache.

If there is enough memory and the demand on the system is high, having more than one copy of this process may dramatically improve the performance and reduce the response time when a query or DML statement is run.

Log Writer writes under a variety of conditions: when a user issues a COMMIT, when the redo log buffer is one-third full, when DBWn writes dirty buffers, or every three seconds.

SMON performs a number of different functions in the database. If there is a system crash, the SMON process will apply the changes in the redo log files (saved to disk previously by the LGWR process) to the datafiles the next time the instance is started. This ensures that no committed transactions are lost because of the system crash. (SMON also performs a number of other tasks that are beyond the scope of this book.)