Privileges The right to perform a specific action in the database, granted by the DBA or other database users.

Roles provide an easy way to group privileges together and assign them to one or more users in the database.

System Privileges Privileges that allow users to perform a specific action on one or more database objects or users in the database. 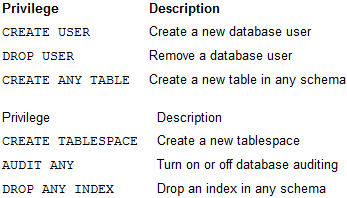 System privileges that allow users to perform specific tasks within a single schema are considered to be user privileges. The typical user privileges are generally a bit more innocuous than the DBA privileges, as you can see by the following examples:

System privileges are granted with the GRANT command, which has the following syntax:

Notice that the syntax makes it easy to grant a group of privileges all at once to one user or to many users. Also, a privilege may be granted to a special class of users called PUBLIC. When a privilege is granted to PUBLIC, all current and future users will have that privilege.

The user SCRAWFORD can now log in and create tables in the database within the SCRAWFORD schema.

The questions you may be asking are, "Why isn't the CREATE SESSION privilege automatic? Don't we want everyone to be able to log in? Why would we create a user who couldn't log in?"

In some database application environments, it is beneficial to keep all of the tables within a single schema for ease of maintenance, quota, and backups. You might not, however, allow the schema owner to log in. In this way, the application users can be tracked to know who used what table in the application's schema. If only the application's username were used, you would not know which user performed what action against the database. The DBA can set up the proper permissions and synonyms for other users to access this new schema, without the need for the application schema's owner to ever log in to the database.

Object Privileges Privileges that allow users to manipulate the contents of database objects in other schemas.

Typical object privileges include the following:

In addition to the ability of the user to grant privileges on objects to other users, a user can grant the privilege for the grantee to subsequently grant the same privilege to yet another user.

Object privileges are granted with a GRANT statement similar to that for granting system privileges:

The column_list parameter is used if the object is a table and only certain columns of the table are made available for updating by other users. The WITH GRANT OPTION clause allows the grantee to pass the privilege on to yet another user.

The HR department at Scott's widget company frequently receives requests to update the EMPLOYEES table. The department asks Janice, the DBA, to make some of the columns of the table available to all employees, so that they can make changes to their phone numbers and e-mail addresses. The GRANT statement is as follows:

Now employees can update their records if they know their employee IDs. One of the new employees uses the following SQL command to change her e-mail address:

However, trying to update a different column in the table is not permitted:

Any user other than HR has only the object privilege on EMPLOYEES to update the EMAIL and PHONE_NUMBER columns.

Notice that the REVOKE statement did not specify any columns in the EMPLOYEES table. When revoking UPDATE privileges on a table, columns cannot be specified. If the HR department wanted to continue to allow access to one of the columns, a new GRANT statement specifying the desired column would be issued after the REVOKE statement.

Role A named group of privileges created to ease the administration of system and object privileges.

As the syntax indicates, a role may have a password. If a role requires a password, a user granted this role must use the SET ROLE command to use the privileges granted to the role.

The Order Entry department at Scott's widget company wants to give employees in certain departments an additional discount on orders placed. To identify a customer as an employee, the Order Entry department will need access to the EMPLOYEES and DEPARTMENTS tables in the HR schema. Janice, the DBA, decides that using a role might be the best way to provide this access, since other departments may be asking for this same functionality in the future.

The first step is to create a role to hold the privileges. Janice creates the role as follows:

Next, the privileges on the tables must be added to the roles:

Finally, the role itself is granted to the user OE:

Now the user OE can read the contents of the EMPLOYEES and DEPARTMENTS tables in the HR schema. In the future, to provide the same access to the HR tables to other departments, only the last GRANT statement needs to be executed.

To check the roles granted to the OE user, Janice runs the following query against the DBA_ROLE_PRIVS data dictionary view:

To find out which privileges are assigned to the role HR_EMP_DEPT, Janice runs another query against the ROLE_TAB_PRIVS data dictionary view:

The role HR_EMP_DEPT has SELECT privileges against two tables in the HR schema: EMPLOYEES and DEPARTMENTS.