You can force the failure of a distributed transaction for the following reasons:

This section describes the features available and the steps necessary to perform such operations.

Forcing a Distributed Transaction to Fail

where n is one of the following integers: 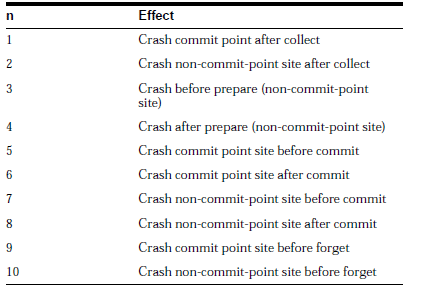 At this point, the in-doubt distributed transaction appears in the DBA_2PC_ PENDING view. If enabled, RECO automatically resolves the transaction.

You can enable and disable RECO using the ALTER SYSTEM statement with the ENABLE/DISABLE DISTRIBUTED RECOVERY options. For example, you can temporarily disable RECO to force the failure of a two-phase commit and manually resolve the in-doubt transaction. The following statement disables RECO:

Alternatively, the following statement enables RECO so that in-doubt transactions are automatically resolved:

An important restriction exists in the Oracle Database implementation of distributed read consistency. The problem arises because each system has its own SCN, which you can view as the database internal timestamp. The Oracle Database server uses the SCN to decide which version of data is returned from a query.

The SCNs in a distributed transaction are synchronized at the end of each remote SQL statement and at the start and end of each transaction. Between two nodes that have heavy traffic and especially distributed updates, the synchronization is frequent. Nevertheless, no practical way exists to keep SCNs in a distributed system absolutely synchronized: a window always exists in which one node may have an SCN that is somewhat in the past with respect to the SCN of another node.

Because of the SCN gap, you can execute a query that uses a slightly old snapshot, so that the most recent changes to the remote database are not seen. In accordance with read consistency, a query can therefore retrieve consistent, but out -of -date data. Note that all data retrieved by the query will be from the old SCN, so that if a locally executed update transaction updates two tables at a remote node, then data selected from both tables in the next remote access contain data prior to the update.

You can use the following techniques to ensure that the SCNs of the two machines are synchronized just before a query: