Putting It All Together: Database Resource Manager Examples - Oracle 10g

This section provides some examples of resource plan schemas. The following examples are presented:

They use default plan and resource consumer group methods. 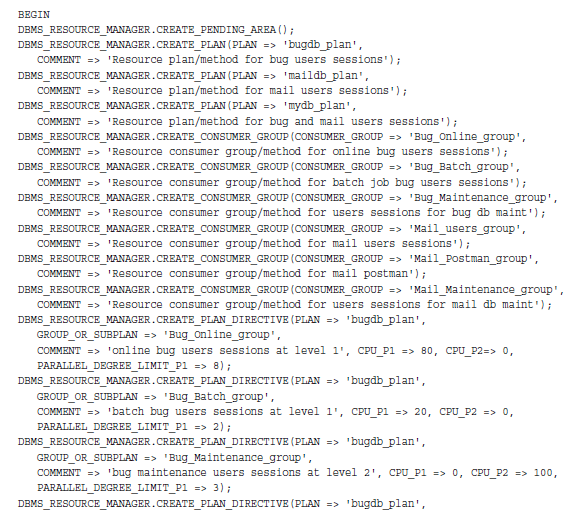 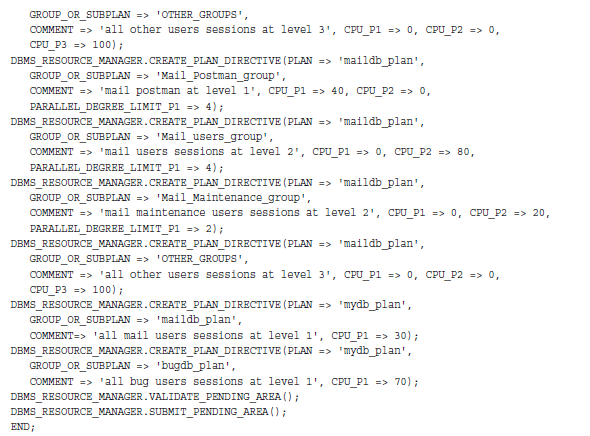 The preceding call to VALIDATE_PENDING_AREA is optional because the validation is implicitly performed in SUBMIT_PENDING_AREA.

The example presented here could represent a plan for a database supporting a packaged ERP (Enterprise Resource Planning) or CRM (Customer Relationship Management). The work in such an environment can be highly varied. There may be a mix of short transactions and quick queries, in combination with longer running batch jobs that include large parallel queries. The goal is to give good response time to OLTP (Online Transaction Processing), while allowing batch jobs to run in parallel.

The plan is summarized in the following table.

The following statements create the preceding plan, which is named erp_plan:

The database-provided groups in this plan are:

These groups can be used, or not used, and can be modified or deleted. You can use this simple database-supplied plan if it is appropriate for your environment.