Example of an In-Doubt Distributed Transaction

You can manually force the local portion of the in-doubt transaction by following the steps detailed in the following sections:

The users of the local database system that conflict with the locks of the in-doubt transaction receive the following error message:

In this case, 1.21.17 is the local transaction ID of the in-doubt distributed transaction. You should request and record this ID number from users that report problems to identify which in-doubt transactions should be forced.

After connecting with SQL*Plus to warehouse, query the local DBA_2PC_PENDING data dictionary view to gain information about the in-doubt transaction:

Determining the State of the Transaction

The transaction on this node is in a prepared state:

Therefore, warehouse waits for its coordinator to send either a commit or a rollback request.

Looking for Comments or Advice

It could also be provided as a transaction name with a SET TRANSACTION ... NAME statement. This information can reveal something that helps you decide whether to commit or rollback the local portion of the transaction. If useful comments do not accompany an in-doubt transaction, you must complete some extra administrative work to trace the session tree and find a node that has resolved the transaction.

In this case, you query this view on the warehouse database:

In this example, the IN_OUT column reveals that the warehouse database is a server for the sales client, as specified in the DATABASE column:

The connection to warehouse was established through a database link from the swilliams account, as shown by the DBUSER _OWNER column:

Additionally, the INTERFACE column tells whether the local node or a subordinate node is the commit point site:

Neither warehouse nor any of its descendants is the commit point site, as shown by the INTERFACE column.

At this point, you can contact the administrator at the located nodes and ask each person to repeat Steps 2 and 3 using the global transaction ID. For example, the following results are returned when Steps 2 and 3 are performed at sales and hq.

Checking the Status of Pending Transactions at sales

Determining the Coordinators and Commit Point Site at sales

Next, the sales administrator queries DBA _2PC _NEIGHBORS to determine the global and local coordinators as well as the commit point site:

Reformatted information corresponding to the rows for the warehouse connection appears below:

Reformatted information corresponding to the rows for the hq connection appears below:

The information from the previous queries reveal the following:

Checking the Status of Pending Transactions at HQ 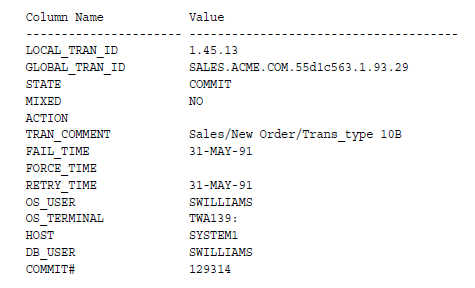 At this point, you have found a node that resolved the transaction. As the view reveals, it has been committed and assigned a commit ID number:

Therefore, you can force the in-doubt transaction to commit at your local database. It is a good idea to contact any other administrators you know that could also benefit from your investigation.

You contact the administrator of the sales database, who manually commits the in-doubt transaction using the global ID:

As administrator of the warehouse database, you manually commit the in-doubt transaction using the global ID:

Also of particular interest in the pending transaction table is the mixed outcome flag as indicated in DBA _2PC _PENDING.MIXED. You can make the wrong choice if a pending transaction is forced to commit or roll back. For example, the local administrator rolls back the transaction, but the other nodes commit it. Incorrect decisions are detected automatically, and the damage flag for the corresponding pending transaction record is set (MIXED=yes).

However, all rows resolved by an administrator that result in a mixed outcome across nodes remain in the pending transaction table of all involved nodes until they are manually deleted using DBMS _TRANSACTIONS.PURGE _MIXED.