Before you enable the Database Resource Manager, you must assign resource consumer groups to users. This can be done manually, or you can provide mappings that enable the database to automatically assign user sessions to consumer groups depending upon session attributes.

The DBMS _RESOURCE _MANAGER _PRIVS package, described earlier for granting the Database Resource Manager system privilege, can also be used to grant the switch privilege to another user, who can then alter their own consumer group. Of the procedures discussed in this section, you use a pending area only for the SET _CONSUMER _GROUP _MAPPING and SET _CONSUMER _MAPPING _PRI procedures. These procedures are used for the automatic assigning of sessions to consumer groups.

Instead of killing a session of a user who is using excessive CPU, an administrator can instead change that user's consumer group to one that is allowed less CPU. Or, this switching can be enforced automatically, using automatic consumer group switching resource plan directives.

Switching Sessions for a User

The SWITCH_CONSUMER_GROUP_FOR_USER procedure changes the resource consumer group for all sessions with a given user name.

The parameters for this procedure are:

The DBMS_SESSION package can be used from within a PL/SQL application, thus allowing the application to change consumer groups, or effectivel priority, dynamically.

You can configure the Database Resource Manager to automatically assign consumer groups to sessions by providing mappings between session attributes and consumer groups. Further, you can prioritize the mappings so as to indicate which mapping has precedence in case of conflicts.

The SET _CONSUMER _GROUP _MAPPING procedure maps a session attribute to a consumer group. The parameters for this procedure are:

The attribute can be one of the following: 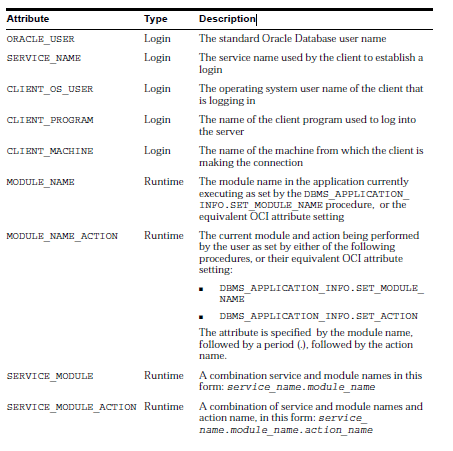 For each of the session attributes, you specify a mapping that consists of a set of pairs (attribute, consumer group)that determines how a session is matched to a consumer group. For example, the following statement causes user scott to map to the dev _group every time he logs in:

In order to decide between conflicting mappings, you can establish a priority ordering of the attributes from most important to least important. The priority of each attribute is set to a unique integer from 1 to 10 using the SET _CONSUMER _MAPPING _PRI procedure. For example, the following statement illustrates this setting of priorities:

To illustrate how mapping priorities work, assume that in addition to the mapping of scott to the dev group, there is also a module name mapping as follows:

In this example, the priority of the database user name is set to 4 (les important), while the priority of the module name is set to 3 (more important). Now if the session sets its module name to backup, presumably because it is going to perform a backup operation, then the session would be reassigned to the low priority consumer group, because that mapping has a higher priority.

A session can manually switch its own consumer group, given the privilege to do so, using the procedure DBMS _SESSION.SWITCH _CURRENT _CONSUMER _GROUP. Although there is no mapping for the EXPLICIT group setting, it is considered an attribute in the mapping priorities when deciding whether to use this EXPLICIT setting or use the consumer group mapping. In other words, if the EXPLICIT setting has the highest priority, then the session always switches consumer groups when it calls the SWITCH _CURRENT _CONSUMER _GROUP procedure.

On the other hand, if the EXPLICIT setting has the lowest priority, then the session only switches consumer groups if none of the other session attributes match in the mappings. Note that the Database Resource Manager considers a switch to have taken place even if the SWITCH _CURRENT _COSUMER _GROUP procedure is called to switch the session to the consumer group that it is already in.

Each session can be switched automatically to another consumer group via the mappings at distinct points in time:

and the session is switched.
Two things to note about the preceding rules are: