The two -phase commit mechanism ensures that all nodes either commit or perform a rollback together. What happens if any of the three phases fails because of a system or network error? The transaction becomes in -doubt.

Distributed transactions can become in-doubt in the following ways:

The RECO process automatically resolves in-doubt transactions when the machine, network, or software problem is resolved. Until RECO can resolve the transaction, the data is locked for both reads and writes. The database blocks reads because it cannot determine which version of the data to display for a query.

Automatic Resolution of In -Doubt Transactions

In the majority of cases, the database resolves the in -doubt transaction automatically. Assume that there are two nodes, local and remote, in the following scenarios. The local node is the commit point site. User scott connects to local and executes and commits a distributed transaction that updates local and remote.

Failure During the Prepare Phase

illustrates the sequence of events when there is a failure during the prepare phase of a distributed transaction: 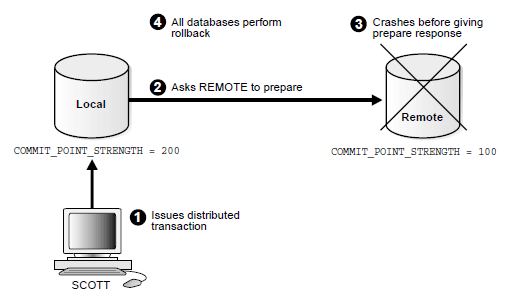 Failure During the Commit Phase

illustrates the sequence of events when there is a failure during the commit phase of a distributed transaction: 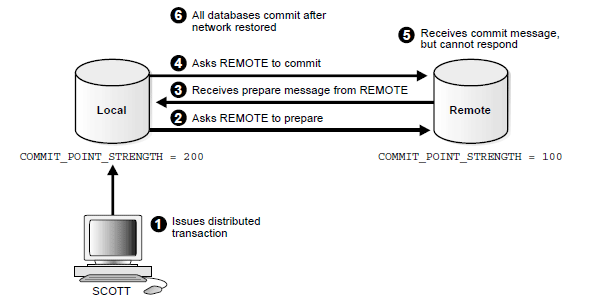 Manual Resolution of In -Doubt Transactions

You should only need to resolve an in-doubt transaction in the following cases:

Resolution of in-doubt transactions can be complicated. The procedure requires that you do the following:

Relevance of System Change Numbers for In -Doubt Transactions

A system change number (SCN) is an internal timestamp for a committed version of the database. The Oracle Database server uses the SCN clock value to guarantee transaction consistency. For example, when a user commits a transaction, the database records an SCN for this commit in the redo log.