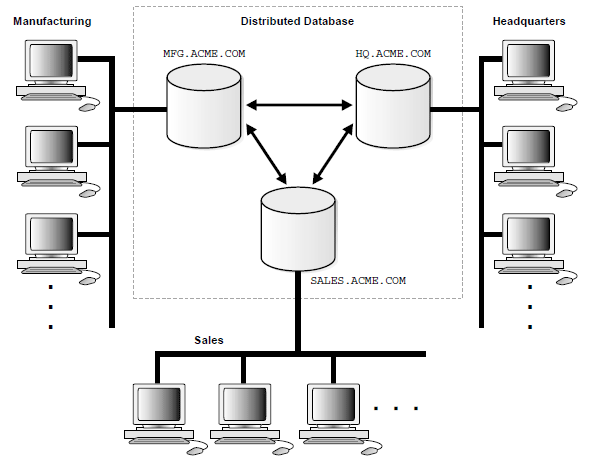 A homogenous distributed database system is a network of two or more Oracle Databases that reside on one or more machines. illustrates a distributed system that connects three databases: hq, mfg, and sales. An application can simultaneously access or modify the data in several databases in a single distributed environment. For example, a single query from a Manufacturing client on local database mfg can retrieve joined data from the products table on the local database and the dept table on the remote hq database.

For a client application, the location and platform of the databases are transparent. You can also create synonyms for remote objects in the distributed system so that users can access them with the same syntax as local objects. For example, if you are connected to database mfg but want to access data on database hq, creating a synonym on mfg for the remote dept table enables you to issue this query:

In this way, a distributed system gives the appearance of native data access. Users on mfg do not have to know that the data they access resides on remote databases.

The terms distributed database and distributed processing are closely related, yet have distinct meanings. There definitions are as follows:

For example, an application may normally access a local database rather than a remote server to minimize network traffic and achieve maximum performance. Furthermore, the application can continue to function if the local server experiences a failure, but other servers with replicated data remain accessible.

Heterogeneous Services (HS) is an integrated component within the Oracle Database server and the enabling technology for the current suite of Oracle Transparent Gateway products. HS provides the common architecture and administration mechanisms for Oracle Database gateway products and other heterogeneous access facilities. Also, it provides upwardly compatible functionality for users of most of the earlier Oracle Transparent Gateway releases.

Generic connectivity enables you to connect to non-Oracle Database data stores by using either a Heterogeneous Services ODBC agent or a Heterogeneous Services OLE DB agent. Both are included with your Oracle product as a standard feature. Any data source compatible with the ODBC or OLE DB standards can be accessed using a generic connectivity agent.

The advantage to generic connectivity is that it may not be required for you to purchase and configure a separate system-specific agent. You use an ODBC or OLE DB driver that can interface with the agent. However, some data access features are only available with transparent gateway agents.

A database server is the Oracle software managing a database, and a client is an application that requests information from a server. Each computer in a network is a node that can host one or more databases. Each node in a distributed database system can act as a client, a server, or both, depending on the situation. 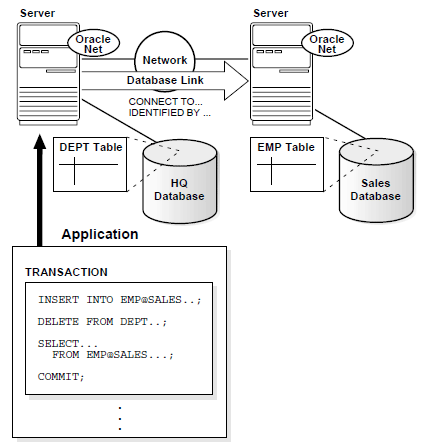 A client can connect directly or indirectly to a database server. A direct connection occurs when a client connects to a server and accesses information from a database contained on that server. For example, if you connect to the hq database and access the dept table on this database. you can issue the following:

This query is direct because you are not accessing an object on a remote database.In contrast, an indirect connection occurs when a client connects to a server and then accesses information contained in a database on a different server. For example, if you connect to the hq database but access the emp table on the remote sales database. you can issue the following:

This query is indirect because the object you are accessing is not on the database to which you are directly connected.