The functionality of an ASM instance can be summarized as follows:

Authentication for Accessing an ASM Instance

ASM instances do not have a data dictionary, so the only way to connect to one is as an administrator. This means you use operating system authentication and connect as SYSDBA or SYSOPER, or to connect remotely, use a password file.

The following initialization parameters relate to an ASM instance. Parameters that start with ASM_ cannot be set in database instances. 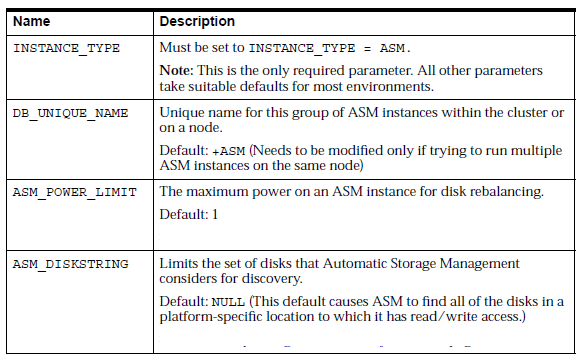 Oracle Database can perform one rebalance at a time on a given instance. The rebalance power is constrained by the value of the ASM _POWER _LIMIT initialization parameter. You can adjust this parameter dynamically. The higher the limit, the faster a rebalance operation may complete. Lower values cause rebalancing to take longer, but consume fewer processing and I/O resources. If the POWER clause is not specified, or when rebalance is implicitly invoked by adding or dropping a disk, the power defaults to the ASM_POWER_LIMIT.

The V$ASM _OPERATION view also gives an estimate in the EST _MINUTES column of the amount of time remaining for the operation to complete. You can see the effect of changing the power of rebalance by observing the change in the time estimate.

If a rebalance is in progress because a failed disk is being dropped, increasing the power of the rebalance shortens the window during which redundant copies on the failed disk are being reconstructed on other disks. Lowering ASM _POWER _LIMIT reduces the amount of CPU and I/O bandwidth that Automatic Storage Management consumes for a rebalance. This leaves these resources available for other applications, such as the database.

The default value errors on the side of minimizing disruption to other applications. The appropriate value is dependent upon your hardware configuration as well as performance and availability requirements.

The value for the ASM _DISKSTRING initialization parameter is an operating system dependent value used by Automatic Storage Management to limit the set of disks considered for discovery. When a new disk is added to a disk group, each ASM instance that has the disk group mounted must be able to discover the new disk using its ASM _DISKSTRING.

In many cases, the default value is sufficient. Using a more restrictive value may reduce the time required for Automatic Storage Management to perform discovery, and thus improve disk group mount time or the time for adding a disk to a disk group. It may be necessary to dynamically change the ASM_DISKSTRING before adding a disk so that the new disk will be discovered through this parameter.

If your site is using a third-party vendor ASMLIB, that vendor may have discovery string conventions that should be used for ASM_DISKSTRING.

Behavior of Database Initialization Parameters in an ASM Instance

Starting Up an ASM Instance

ASM instances are started similarly to Oracle database instances with some minor differences. These are:

The following is a sample SQL*Plus session where an ASM instance is started:

ASM instances are smaller than database instances. A 64 MB SGA should be sufficient for all but the largest ASM installations.

Shutting Down an ASM Instance

The table that follows lists the SHUTDOWN modes and describes the behavior of the ASM instance in each mode.

A number of fixed tables, visible from both the ASM and database instances are provided for administrative and debugging purposes.