What is NGN frame structure?

Let’s find these 30 timeslots are available for the transmission of the digitized analogue signal in 8-bit form, with a bandwidth of 64 kbit/s (e.g. the customers’ data).

Here the European recommended system determines the Timeslot 0 of each frame is used for synchronization, also known as frame alignment (see the following Figure). Let’s confirm the timeslots in each frame are aligned between the transmitting station and the receiving station.

You can find that an error check is also available in timeslot 0, using a cyclic redundancy check (CRC) to verify the frame alignment, which is carried in data bit 1 of all frames. The process of reporting Far End Alarms is determined by a binary 1 being inserted in data bit 3 of all the odd frames. You can use the remaining data bits 4 to 8 of the odd frames for national alarms and network management.

Here Timeslot 16 has 8 data bits available, and by using a variable code of 4 data bits, signaling can be performed for 2 voice channels in each frame.

Let’s find that 15 frames are required to complete the signaling for all the voice channels (see the following Figure).

You can carry the multiple frames in a logical order, there has to be a device for aligning these. Let’s achieve this by using the frame prior to the frames containing signaling information, known as Frame 0.

Timeslot 16 in Frame 0 contains a multi-frame alignment word (MFAW), using data bits 1 to 4, and are used to indicate the start of a multi-frame, which are checked at the receiving station (see the following Figure).

Now use Data bit 6 to indicate distant multi-frame alignment loss(DLMFA). Here a multi-frame consists of all the frames required to complete all speech and signaling operations, i.e. 16 frames, and is known as a multi-frame (see the following Figure). 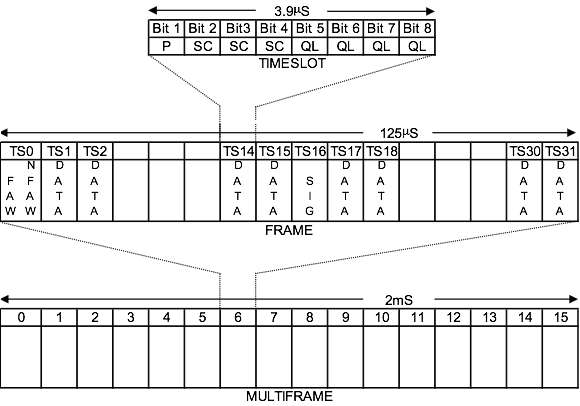 Duration of multiframe = Number of frames x duration of frame

The remaining channels are all usable for voice or data transmission, and are known as timeslots 1 to 15 and 17 to 31, and equate to channels numbered 1 to 30. 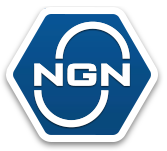