The cables or connections in a physical topology are often referred to as network media (or physical media). Choosing how computers will be connected in a company’s network is critical. A wrong decision in the physical topology makes the media difficult to correct because it is costly and disruptive to change an entire installation once it is in place. The typical organization changes the physical layout and physical media of a network only once about every 10 years, so it is important to choose a configuration that you can live with and that allows for growth.

There are four most common topologies:

In a bus topology, all computers are attached to a single continuous cable that is terminated at both ends, which is the simplest way to create a physical network. Originally, computers were attached to the cable with wire taps. This did not prove practical, so drop cables were used to attach computers to the main cable. In 10Base-2 Ethernet, no drop cables are used, but instead, a “T” is inserted in the main cable wherever a station needs to connect.

An Example for Physical bus Topology 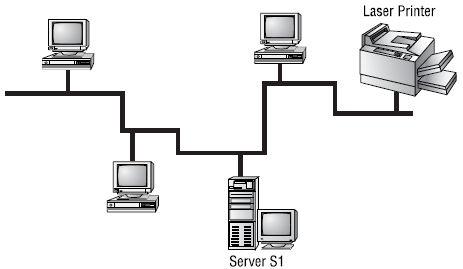 When communicating on a network that uses a bus topology, all computers see the data on the wire. This does not create chaos, though, because the only computer that actually accepts the data is the one to which it is addressed. You can think of a bus network as a small party. David is already there, along with 10 other people. David would like to tell Joe something. David yells out, “Joe! Will you grab me a cup of coffee, please?” Everyone in the party can hear David, but only Joe will respond. A star network with a hub, which you’ll read about later, also operates in this manner.

As with most things, there are pros and cons to a bus topology. On the pro side, a bus topology has the following characteristics:

The following characteristics describe the con side of a bus topology:

Unlike those in a bus topology, each computer in a star topology is connected to a central point by a separate cable or wireless connection. The central point is a device known by such names as hub, MAU, concentrator, switch, and access point, depending on the underlying technology.

Although this setup uses more cable than a bus, a star topology is much more fault tolerant than a bus topology. This means that if a failure occurs along one of the cables connecting to the hub, only that portion of the network is affected, not the entire network. Depending on the type of device at the other end of that cable, this may affect only a single device. It also means that you can add new stations just by running a single new cable.

A typical Star Topology with a hub 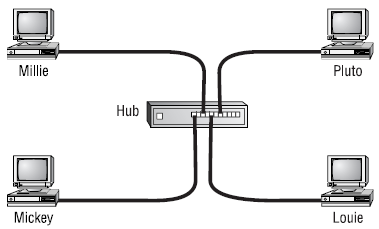 The disadvantages of a star topology include the following:

In the ring topology, each computer is connected directly to two other computers in the network. Data moves down a one-way path from one computer to another.The good news about laying out cable in a ring is that the cable design is simple. The bad news is that, as with bus topology, any break, such as adding or removing a computer, disrupts the entire network. Also, because you have to “break” the ring in order to add another station, it is very difficult to reconfigure without bringing down the whole network. For this reason, the physical ring topology is seldom used. 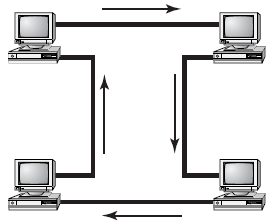 A few pros and many cons are associated with a ring topology. On the pro side, the ring topology is relatively easy to troubleshoot. A station will know when a cable fault has occurred because it will stop receiving data from its upstream neighbor.
On the con side, a ring topology has the following characteristics:

In a mesh topology, a path exists from each station to every other station in the network, resulting in the most physical connections per node of any topology. While not usually seen in LANs, a variation on this type of topology—the hybrid mesh—is used on the Internet and other WANs in a limited fashion. Hybrid mesh topology networks can have multiple connections between some locations, but this is done only for redundancy. In addition, it’s called a hybrid because other types of topologies might be mixed in as well. Also, it is not a full mesh because there is not a connection between each and every node, just a few for backup purposes. 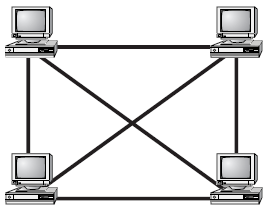 If your network grows to only 10 computers, you will have 45 connections to manage! Given this impossible overhead, only small systems can be connected this way. The payoff for all this work is a more fail-safe, or fault-tolerant, network, at least as far as cabling is concerned.

Today, the mesh topology is rarely used, and then only in a WAN environment and only because the mesh topology is fault tolerant. Computers or network devices can switch between these multiple, redundant connections if the need arises. On the con side, the mesh topology is expensive and, as you have seen, quickly becomes too complex. Using what is known as a partial mesh is a workable compromise between the need for fault tolerance and the cost of a full mesh topology. With a partial mesh, the same technology can be used between all devices, but not all devices are interconnected. Strategy becomes the name of the game when deciding which devices to interconnect.

With complex networks, we must have a way of intelligently identifying which part of the network we are discussing. For this reason, we commonly break networks into backbones and segments. 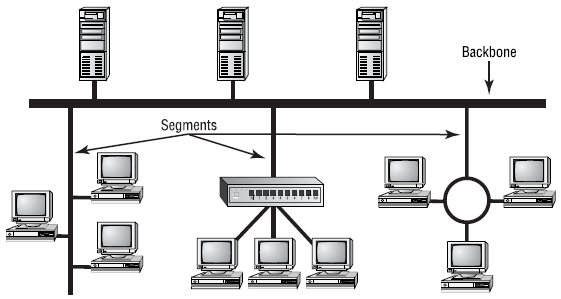 A backbone is the part of the network to which all segments and servers connect. A backbone provides the structure for a network and is considered the main part of any network. It usually uses a high-speed communications technology of some kind, such as Fiber Distributed Data Interface (FDDI) or 1 or 10 Gigabit Ethernet. All servers and all network segments typically connect directly to the backbone so that any segment is only one segment away from any server on that backbone. Because all segments are close to the servers, the network is more efficient.

Each topology has its advantages and drawbacks. The process of selecting a topology can be much like buying a pair of shoes. It’s a matter of finding something that fits, feels right, and is within your budget. Instead of asking what your shoe size is, ask questions such as, How much fault tolerance is necessary? and How often will I need to reconfigure the network? Creating a simple network for a handful of computers in a single room is usually done most efficiently by using a wireless access point and wireless network cards because they are simple and easy to install and don’t require the running of cables. Larger environments are usually wired in a star because moves, adds, and changes to the network are performed more efficiently with a physical star than with any of the other topologies.
If you need uptime to the definition of fault resistant (that is, 99.9-percent uptime or less than 8 hours total downtime per year), you should seriously consider a partial mesh layout. While you are thinking about how fault tolerant a full mesh network is, let the word maintenance enter your thoughts. Remember that you will have n(n–1)/2 connections to maintain in a full mesh configuration and a subset of that for a partial mesh, which will quickly become a nightmare and could exceed your maintenance budget.
Generally speaking, you should balance the following considerations when choosing a physical topology for your network: