Overview of Ports and Sockets - Networking

On a TCP/IP network, data travels from a port on the sending computer to a port on the receiving computer. A port is a numerical value that identifies the application associated with the data. The source port number identifies the application that sent the data, and the destination port number identifies the application that receives the data. Each port is assigned a unique 16- bit number in the range of 0 through 65535. Additionally, there are two types of ports—TCP and UDP—which are based on their respective protocols. Both TCP and UDP maintain a separate list of used (reserved and allocated) port numbers. This allows them both to make sure no port is duplicated within each list. A benefit of this mechanism is that multiple application data streams can be multiplexed through each protocol simultaneously. For example, it is no problem for TCP to handle HTTP traffic and FTP traffic simultaneously, nor is it a problem for UDP to allow TFTP and SNMP simultaneous access to the network. 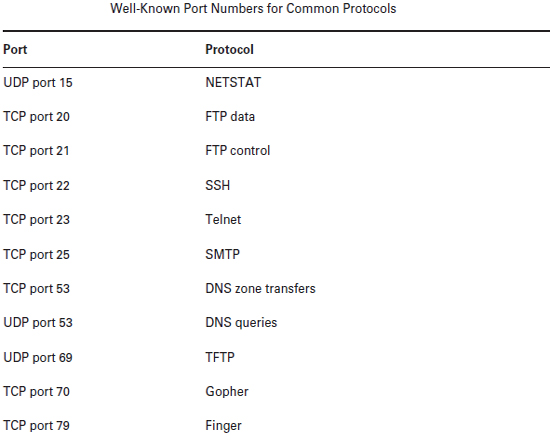 The very existence of ports and their numbers is more or less transparent to the users of the network because many server-side ports are standardized. Thus, a client application protocol will know which remote port it should connect to for a specific service. For example, all servers that offer Telnet services usually do so on TCP port 23, and web servers normally run on TCP port 80. This means that when you connect to the Internet to browse to a web server, you automatically connect to port 80, and when you use Telnet, you automatically connect to port 23. The TCP/IP protocol suite uses a modifiable lookup table to determine the correct port for the data type.

The combination of an IP address (more on IP addresses in a moment) and a port number is known as a socket. A socket identifies a single network process in terms of the entire Internet or other endto- end IP-based internetwork. Two sockets—one on the sending system and one on the receiving host—are needed to define a connection for connection-oriented protocols, such as TCP. You may hear or see the terms socket and port used as if they are interchangeable terms, but they are not.

Sockets were first developed as a part of the BSD UNIX system kernel, in which they allow processes that are not running at the same time or on the same system to exchange information. You can read data from or write data to a socket just as you can with a file. Socket pairs are bidirectional so that either process can send data to the other.