NetWare is one of the more powerful network operating systems on the market today. It is almost infinitely scalable and has support for multiple client platforms. Although many companies larger than a few hundred stations are running NetWare, this NOS enjoys success in many different types of networks.

In the following sections, we will look at the features of NetWare and how it functions as well as how it interoperates with other operating systems.

Specifically, we will learn about the following topics:

NetWare is popular in large networks (more than 20 servers) because of features such as centralized administration of all users and their properties. The most important features of Net-Ware 4.x and later are the following:

NetWare has always been an excellent directory, file, and print server, but with its acquisition of many Java technologies (including the Java graphical user interface [GUI] on the server introduced with NetWare 5), it is starting to encroach on the application server market. These features make NetWare an excellent choice in the directory, file, and print environments.

NetWare is one of the most flexible NOSes and can communicate with just about any computing environment, including the following:

When each of these operating systems tries to communicate with a NetWare server, the server appears as though it were a member of that type of network. For example, on a Mac OS network, a NetWare server can appear to be just another Macintosh server, but in reality it’s a Pentium-classbox running NetWare. I have found that a NetWare server makes a better server for Macs than Apple’s own servers running the AppleShare network operating system.

Authentication is the process by which a user proves they are who they say they are to the networkoperating system. All NetWare versions since version 4.0 use Novell Directory Services (NDS) for resource access and authentication. A directory service is a feature of a network operating system that enables users to find network resources. There are three main types of directory services for NetWare:

The bindery (pronounced with a long i) is a simple, flat database of users, groups, and security information that resides on a server. It is available in versions of NetWare prior to version 4.

This provides access to a global, hierarchical database of network entities (called objects). It is available in version 4 and later. Based on the X.500 Internet directory standard (a standard way of naming network entities), this database (called the Directory with a capital D , not to be confused with a DOS directory) is distributed and replicated to all NetWare servers on the network. Each server contains a part of the directory database. Additionally, all servers know about one another and the directory information that each contains.

This is just an extension of NDS. It allows NDS trees to be connected over the Internet, essentially creating a meta directory. The current version of NDS is known as eDirectory.

A major advantage of NDS over the bindery is that with NDS, the entire network is organized into a hierarchical structure, called an NDS tree. This tree is a logical representation of a network. It includes objects that represent the network’s users, servers, printers, and other resources. On the other hand, the bindery contains user information for only the server on which it resides. NDS is described as a network-centric directory service, whereas the bindery is server-centric. 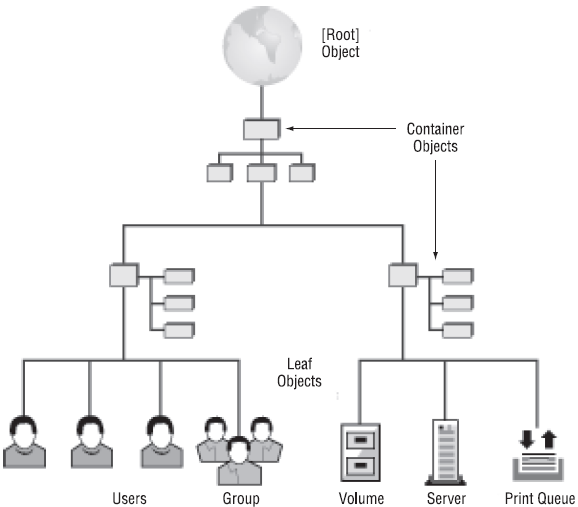 To change the Directory database, a NetWare network administrator uses a program called NetWare Administrator. Although this graphical Windows utility has gone through several iterations in the past six years since its introduction, it is the only administrative utility you need to modify NDS objects and their properties. Many utilities are available for specific functions, but NetWare Administrator is the one utility that can do it all. 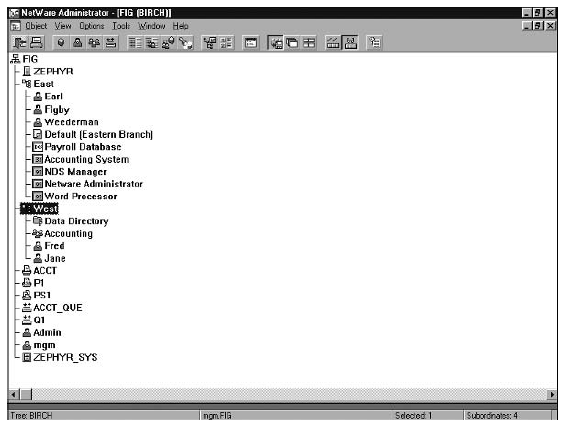 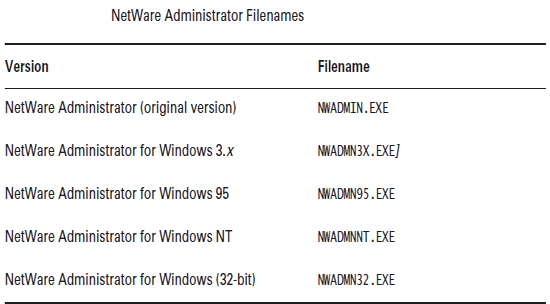 Directories like Novell’s that use the X.500 standard are hierarchical in nature and use a structure called the Directory Information Tree (DIT). In a DIT, the top level of the structure is called the [Root],which leads to the fact that the DIT is commonly referred to as an inverted tree.

Leaf objects represent resources in your organization (such as people, devices, applications, services, and soon) and can be likened to each name in a telephone book (Smith, Chang, Moreau, and soon).

Each object in the tree has attributes, which are properties that define the object. Information stored in an attribute is called a value. An example of an attribute in a telephone book is phone number, and the value is the number itself. Objects can have many different attributes.

Each object (depending on its type) can be located only in certain places within the DIT.Labels are used to identify object types and thus their possible locations in the tree. Each label is a one- or two-character abbreviation of the object type or of an object attribute. Each object is also graphically represented in the tree. A Leaf Object’s graphical representation varies depending on the type of Leaf Object (for example, user, printer, and application).

Object types, where in the tree an object is allowed to reside, and object attributes follow rules called the schema. 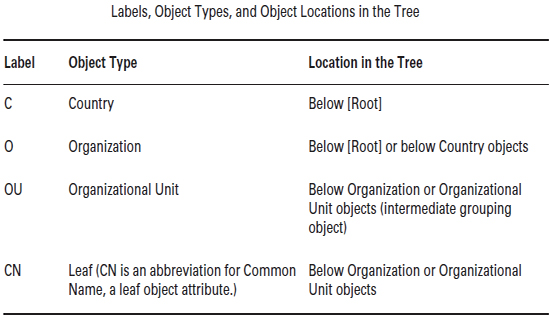 An object’s context is its exact location within the tree, taking into account all of the containers that it is in. For example, if a user, Connie, was in the sales organizational unit, which in turn was in the Acme organization, the user object Connie would have the context of

Because it has the OU= and O= labels, this name is known as a typefull context. This type of name is used when there must be no doubt about the type of container that exists at a particular level.In addition, Connie’s typefull distinguished name (the name of an object plus its context) would be

Contexts and names can also be used without their container labels, like so:

This is known as a typeless context and is used most often because it’s easier to remember.

NetWare is known for its file and print services, that is, the network services that serve out files to client computers and allow printers to be shared over the network. NetWare was the first NOS to provide file and print services for PCs and it arguably is the best at it. As a matter of fact, the file services are so advanced that NetWare can be made to appear as any kind of file server. For example, a NetWare server can be made to look like an AppleShare server to Macintosh clients, an NFS server to UNIX clients, and so on.

Application support is one major downfall for NetWare. NetWare is a server-only platform. Novell’s view is that a server should run only services, not desktop-type applications. To that end, NetWare servers run services very well. But NetWare does not run desktop applications (like word processing programs, spreadsheets, or what have you) at all.

NetWare is arguably the most secure NOS. It uses public key encryption during the login process (passwords are never sent in cleartext between client and server). Plus, you cannot get access to the local files unless you are logged in with a proper client. NetWare is the only NOS that has been certified by the National Security Agency (NSA) as C2 Red Book secure, which means that it is secure enough for U.S. government use. In addition, NetWare uses NDS for the back-end authentication. Clients will send authentication requests to NDS and NDS will look up the user in the Directory and verify that the attempted login is an appropriate request and that the user information is valid.