Before you add a new hardware component to a network, upgrade the operating system, install a new application, or make any other such change, you need a clear picture of the current condition of the network. Additionally, you need to have an understanding of how a network behaves when it is functioning normally so that you will be able to tell when the network is malfunctioning. This includes an understanding of standard operating procedures and how they are being implemented and an awareness of any environmental issues that affect the way the network is set up. You also need to take a close look at error messages and log files, which will give you a lot of information about the health of the network, and be sure you are familiar with the current configuration and baselines. In addition, don’t forget to review the manufacturers’ documentation that you should have at hand. A 15-minute perusal of the documentation beforehand could save you hours of work later.

Standard operating procedures (SOPs) are part of company policy and typically cover everything from sick-day accrual to how the computer systems are used. In particular, network administrators need to be aware of company policies regarding the following:

Policies about these issues will be reflected in the network’s naming conventions, protocol standards, and workstation configuration and will affect the location of network devices.

Naming conventions specify how network entities are named within the guidelines of the network operating system being used. Each entity name must be unique on the network, including the names you give to the following:

Another common practice is to name file servers FS followed by a number, such as FS1, FS2, FS3, and so on. Unfortunately, this naming convention doesn’t provide the user with any information about what the server stores.

The most common naming convention in use today is a combination of location and function. Using this approach, you might specify that the first four characters of the name identify the server’s location; the next two, the server’s function; and the last two, the server’s rank for that type of server. For example, the FRGOFS02 server is located in Fargo, it’s a file server, and it is the second server of that type in Fargo.

As with server names, printer names are often derived from their function, location, or both. Naming a printer after its function or location makes the printer easier to locate for the users. If, for example, your dot-matrix printer is used to print multiple-part forms, you might name it Forms. If you have more than one forms printer, you might need to use two-word names, such as Forms-Ship or Forms-Finance. You might name high-quality printers Laser or Laser-Legal, indicating that this printer is always loaded with legal-size paper.

Generally speaking, the simplest username is the user’s first name. This method works well in a company with only a few users and fits the informality often found in a small office. It is fairly insecure, however, because hackers could easily guess a username. It also won’t work in a larger organization that could easily include two people with the same first name.

The user-naming convention you use should allow for unique IDs and ensure that there are no duplicates. Larger firms typically use a first initial followed by part of or the entire last name. For example, Rebecca Messersmitt-Kazlowski would be RMessersmittKazlowski. This is still a long username and might even cause a problem with maximum character lengths allowed in some operating systems. In this example, Rmesser might be used as a short, yet unique, login name.

Groups are network entities that logically associate users by function. They are designed to make network administration easier: You can assign rights to a group of users all at once rather than to each individual. Because the group of users is organized by function, it would stand to reason that groups should be named by function. Additionally, the names should be short, fewer than 15 characters if possible. For example, if you have a group of users from the sales department that all use the same printer, you might name the group SALES_PRN. On the other hand, if you just want a general group for security and rights assignment purposes, you might name that group of users SALES.

When you install new services on the network, such as printers, applications, and so on, it is always a good idea to test their functionality first. It is not good practice to do this testing while logged in using an administrative account because administrative accounts usually have allencompassing rights to the network. Thus, problems related to accessing the service are more likely to occur when an administrative account is not used for testing. It is better to use a user account that is equivalent to one who will be using the service. For this reason, it makes sense to create test accounts that you can use to test access to and the functionality of new services.

Service accounts, on the other hand, give outside network maintenance personnel the ability to perform administrator-level functions on your network. This is necessary whenever you must call in outside personnel.

Environmental conditions, as they relate to installing or upgrading a network and its components, are important. Just like human beings, computers require a proper environment in order to function correctly. If the environment is harsh, the device will not function at peak efficiency.

Surprisingly, environmental conditions and their consequences may be the most overlooked topic in the entire industry of networking. Often problems that seem to appear out of nowhere and appear to make no sense are caused by environmental conditions. Let’s examine the frequently elusive challenges that we all face at one time or another:

During a power overage, too much power is coming into the computer. Power overage can take two forms:

Comparing a power spike and a power surge 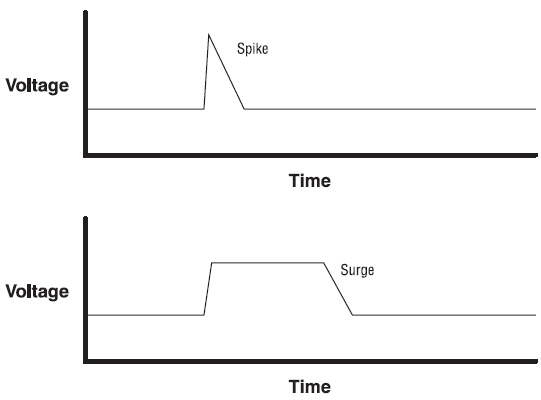 Typically, power surges last longer than a second or two, and they may last for several minutes.

For this reason, surges are usually more damaging than spikes (although a very large spike can damage a computer’s power supply just as much as a surge). Figure shows the difference between a spike and a surge.

Two types of devices are used to protect computers and other network devices from power overage problems:

Surge protectors with a very low overvoltage threshold cost upward of $50. They sacrifice themselves in the event of any significant overvoltage but are smart enough not to trip for just a small amount over the standard power levels. Additionally, most of these protectors contain electronic circuits that can “shave off” any overvoltage and ensure that the powered devices receive only the voltage they need.

Line conditioners are a much better choice for protecting against surges and spikes. Line conditioners use several electronic methods to “clean” all power coming into them. The best models can be prohibitively expensive, but there is a way to get a kind of “natural” line conditioner. An Uninterruptible Power Supply (UPS) uses a battery and power inverter to run the computer equipment that plugs into it. A battery charge continuously charges the battery. The battery charger is the only thing that runs off line voltage. The computer itself runs off steady voltage supplied by the UPS. When power problems occur, the battery charger stops operating and the equipment continues to run off the battery. The power coming from the UPS is always a continuous 110 volts, 60 Hertz. Because the AC power from the wall never crosses over the battery charger to run the computer components, it’s considered a “natural” line conditioner. As you will see, the UPS is the solution for a number of power problems.

Power underages occur when power levels drop below the standard, and they are almost as common as power overages. There are three types of power underages:

_ A sag is an inverted spike. Sags occur when power levels drop below normal and rise back to normal within a brief period of time (usually less than one second). It is doubtful that you would be aware of sags (you might see a light flicker off and then on), although your computer might reboot.
_ A brownout, on the other hand, occurs when power drops below normal levels for several seconds or longer. In other words, a brownout is an inverted surge. The lights in the room will dim for a short period of time and then come back to full brightness.
_ A blackout is a total loss of power for several seconds, several minutes, or several hours.

Any one of these problems will cause your computers and other network devices to malfunction. 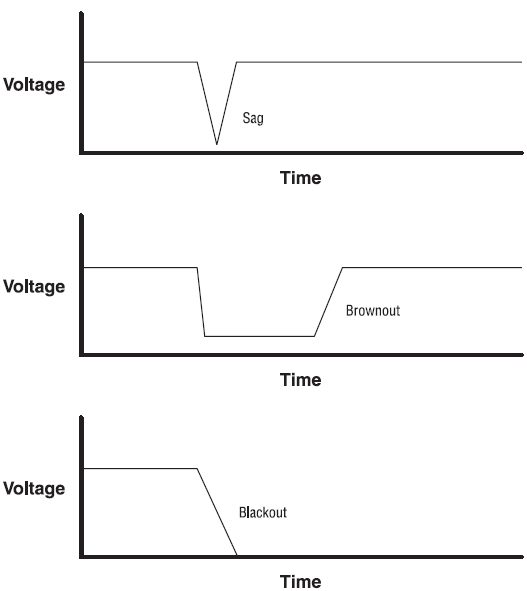 To ward off power underage problems, you need only one device: a UPS, which allows network devices to continue to function even in the complete absence of power. Some are intelligent and can shut down your computer in the case of a blackout. 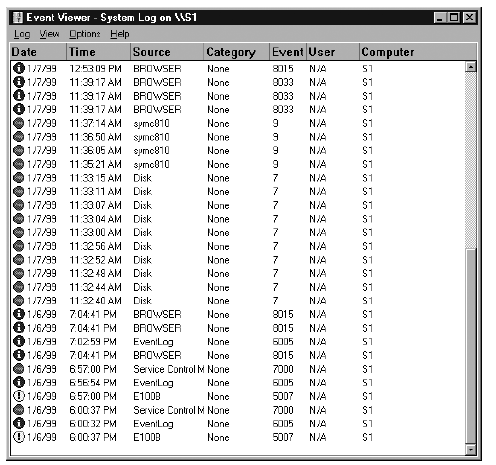 A careful perusal of error messages and log files can give you a good sense of the health of a network. This is important because you may not want to add a new network device to a networkthat is experiencing problems. Log files record every action that occurs on a computer. For example, a log file can contain a record of who logged in to the network when, from which machine, and at what time.

A sample log file from the windows NT Event Viewer

Each network operating system includes special tools for creating and maintaining log files. In Windows NT and later, for example, you use Event Viewer (as shown in Figure) to display System Logs, Security Logs, and Application Logs. NetWare tracks events in the ABEND.LOG, SYS$LOG.ERR, and CONSOLE.LOG files.

Of particular value when you are upgrading a network or installing new hardware or software are the server and client configuration documents. If these have been properly maintained, they include information about the current hardware configuration (including I/O address, IRQ, DMA, and memory address), the installed software, any patches, and any special settings.

Baseline documentation indicates how the network normally runs. It includes network traffic statistics, server utilization trends, and processor performance statistics. Baselines indicate how things currently are, not how they should be. Creating and maintaining these types of documents provides a valuable reference point should a client or server fail or malfunction after an upgrade.

You have at your disposal three more resources that can be of value before, during, and after upgrading or installing new hardware or software:

We discuss all of these in detail in Chapter 10.

All three of these resources can come in handy when you are unable to get through to technical support phone numbers. But some people feel that talking with a human is worth the effort it sometimes takes. Be aware that this is not necessarily free. See Chapter 10 for more information.