Although you can never be completely prepared for every natural disaster or human foible that can bring down your network, you can make sure that you have a solid backup plan in place to minimize the impact of lost data. Even if the worst happens, you don’t have to lose days or weeks of work, provided that you have a solid plan in place. A backup plan is the set of guidelines and schedules that determine which data should be backed up and how often.

A backup plan includes information such as the following:

The following sections cover some of the items that are contained in a common backup plan:

When you back up your network’s data, you must have something on which to store it; this is called the backup medium.

You have several options:

Let’s examine the advantages and disadvantages of each type, starting with small-capacity removable disks.

Small-capacity disks are magnetic media disks that have a capacity of less than 1GB and can be removed from their drives and replaced as they get filled. They are popular because of their low cost and ease of use. Additionally, because they are inexpensive, many computers come with one or more of these drives. Table 9.1 lists some examples of this type of backup medium and their popular capacities.

Removable optical disks use a laser (or some kind of light beam) to read and write information stored on a removable disk. They typically have large capacities and are fairly slow (more than 100 milliseconds as opposed to less than 50 milliseconds for magnetic) access times. The advantage to optical disks is that the capacities start at about 128MB and go up from there (650MB is a common size). There are even special optical jukeboxes, containing hundreds of disks and a robotic arm to select disks and put them in the drive(s), that have capacities in the hundreds of terabytes (1 terabyte is 1024 gigabytes).

Magnetic tape is the oldest and most popular backup medium for offline (not readily accessible) data storage. It stores data in the form of magnetically oriented metal particles (either copper oxide or chromium dioxide) on a polyester tape. It is popular because it is simple, inexpensive, and has a high capacity. Most networks use a magnetic tape backup of some kind. Table 9.4 lists a fewof the most common magnetic tape backup technologies and their common capacities.

A backup utility is a software program that can archive the data on a hard disk to a removable medium. Backup utilities can compress data before they store it, making it more efficient to use a backup program to archive data than to simply copy it to the backup medium.

Most operating systems include backup utilities, but these are usually simple programs that lack the advanced features of full-fledged, third-party programs (such as Seagate Backup Exec and Computer Associates’s ARCserve):

All of these backup utilities are good for an initial backup of your system. For a complete set of features including scheduling and managing tape sets, purchase a third-party product that fits your platforms and specific backup requirements

After you choose your backup medium and backup utility, you must decide what type of backup to run. The types vary by how much data they back up each time and by how many tapes it takes to restore data after a complete system crash.

There are three backup types:

In a full backup, all network data is backed up (without skipping any files). This type of backup is straightforward because you simply tell the software which servers (and, if applicable, workstations) to back up and where to back up the data and then you start the backup. If you have to do a restore after a crash, you have only one set of tapes to restore from (as many tapes as it took to back up everything). Simply insert the most recent full backup into the drive and start the restore.

If you have a tape system with a maximum capacity of half the size of all the data on your server, the backup utility will stop the backup halfway through and ask you to insert the next tape. Normally, full backups take several hours, and most companies can’t afford to have a user sit in front of the tape drive and change tapes. So you need a backup drive and medium with enough capacity or a backup system that can automatically change its own tapes (such as a DAT autoloader).

Note that if you are working with 10GB of data, approximately 10GB is stored on a new tape each night, along with any additional data from that day. However, you are basically backing up the same data each day.

The amount of data backed up with a full backup 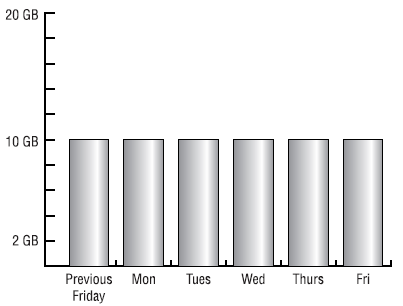 Here’s how it works: The backup utility keeps track of which files have been backed up through the use of the archive bit, which is simply an attribute that indicates a file’s status with respect to the current backup type. The archive bit is cleared for each file backed up during the full backup. After that, any time a program opens and changes a file, the NOS sets the archive bit, indicating that the file has changed and needs to be backed up. Then each night, in a differential backup, the backup program copies every item that has its archive bit set, indicating the file has changed since the last full backup. The archive bit is not touched during each differential backup.

When restoring a server after a complete server failure, you must restore two sets of tapes: the last full backup and the most current differential backup. A full restoration may take longer, but each differential backup takes much less time than a full backup. This type of backup is used when the amount of time each day available to perform a system backup (called the backup window) is less during the week and more on the weekend.

Notice that the amount of data becomes gradually larger every day as the number of files that need to get backed up increases. Remember that the archive bit isn’t cleared each day. By the end of the week, therefore, the files that changed at the beginning of the week may have been backed up several times, even though they haven’t changed since the first part of the week.

In an incremental backup, a full backup is used in conjunction with daily partial backups to back up the entire server, thus reducing the amount of time it takes for a daily backup. With an incremental backup, the weekly full backup takes place as it does during a differential backup, and the archive bit is cleared during the full backup. The incremental, daily backups back up only the data that has changed since the last backup (not the last full backup). The archive bit is cleared each time a backup occurs. With this method, only files that have changed since the previous day’s backup are backed up. Each day’s backup is a different size because a different number of files are modified each day.

The amount of data backed up in a differential backup 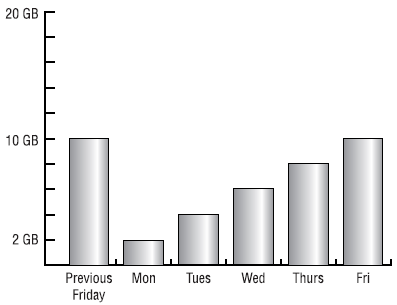 This method provides the fastest daily backups for networks whose daily backup window is extremely small. However, the network administrator does pay a price for shortened backup sessions. / The restores made with this method after a server failure take the longest of the three methods. The full backup set is restored plus every tape from the day of the failure back to the preceding full backup.

Note that not only is the amount of data backed up each day different, as is the case with differential and full backups, but it is also much smaller than with a differential or full backup. Furthermore, unlike the other two backup types, incremental backups never back up the same information twice.

The amount of data backed up with an incremental backup 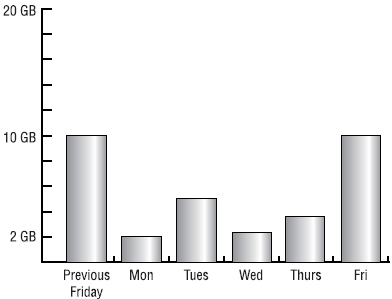 Rotating backup tapes is the most practical way to manage a tape backup scheme, since the costs of using a new tape each day are prohibitive. Do not use a different tape each day. Instead, reuse tapes from previous months and weeks. We will look at some simple rotations, such as weekly, along with some rather complicated schemes.

In a weekly rotation, you use a different backup tape or tapes for each day of the week. Weekly rotations are the simplest to understand and set up. You first assign a tape to each weekday and label the tape with the name of the day. You have five tapes, and you overwrite each tape as the day of the week comes again. The furthest you can go back to do a restore is one business week. On Friday, before the backup, you can go back to any day for one week, but no further.

Rotating tapes on a monthly basis allows you to restore data for an entire month. Managing this type of backup scheme is more complicated because you must keep track of many more tapes. A straightforward solution is to assign 31 tapes and do a full backup each day. This becomes unwieldy if a full backup takes many tapes. For example, a thousand-user corporation’s e-mail, file, and print servers can take multiple high-capacity DLT tapes per session.

Most of your restore requests will be reported shortly after a file is accidentally deleted or corrupted. Take your typical user who accidentally deletes their home directory. Using a GUI interface, this is as easy as right-clicking a folder and then left-clicking Delete. The user will immediately call network support and plead for quick rescue. In this case, you only have to go back to the previous day’s tape. To plan for this scenario, have daily backups that go back a week. Supplement this with a weekly backup for an entire month.

In this configuration, you would use no more than nine tapes. You will use one tape for each day Monday through Thursday (four tapes) and one tape for each Friday of the month (four or five tapes, depending on how many Fridays there are in a month). A maximum of nine tapes will give you daily backups for a week and weekly backups for a month. Label the tapes Monday through Thursday and Friday Week 1 through Friday Week 5.

You can build a yearly backup on top of the monthly system. You’ll need 12 tapes, one for each month, labeled with the names of the months. Rename the last weekly, full backup of each month to the corresponding month. You go from 9 tapes to 21 tapes and gain the capability of going back a year to restore data. Only one day out of each month is available after you go back further than your current month.

In addition to daily, weekly, and yearly backups, some companies, for archival purposes, do an end-of-year backup, which is then kept offsite in long-term storage. They do this to keep a record of the year’s financial and transactional data so that they can refer to it in case of tax problems. (The IRS may require businesses to keep transactional data for seven years).

Some companies do two end-of-year backups—one before closing out the fiscal year and another after closing out. They do this in case they mess up the closing and need to start over. When the closing out is finished, they back up the closed-out system and place the tape in long-term storage. 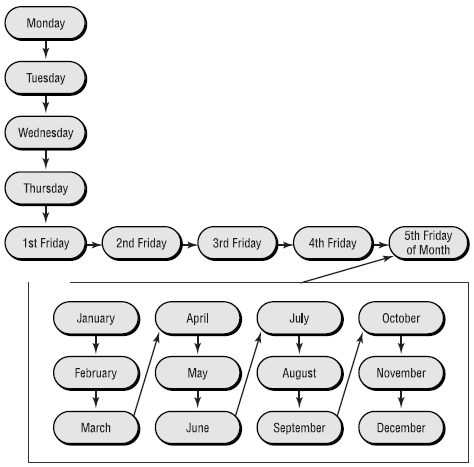