Arithmetic coding is a form of entropy encoding used in lossless data compression. Normally, a string of characters such as the words "hello there" is represented using a fixed number of bits per character, as in the ASCII code. When a string is converted to arithmetic encoding, frequently used characters will be stored with fewer bits and not - so - frequently occurring characters will be stored with more bits, resulting in fewer bits used in total. Arithmetic coding differs from other forms of entropy encoding such as Huffman coding in that rather than separating the input into component symbols and replacing each with a code, arithmetic coding encodes the entire message into a single number, a fraction n where (0.0 ≤ n< 1.0). 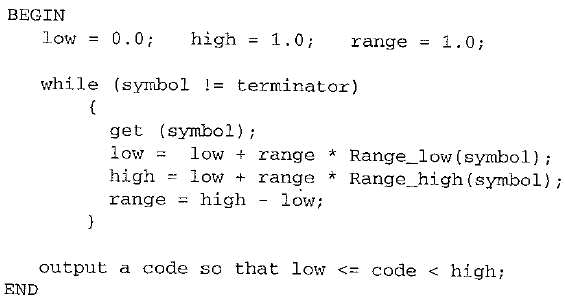 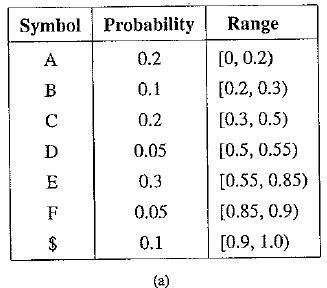 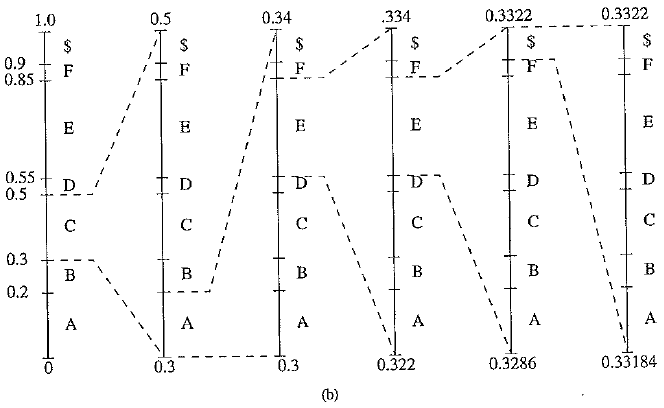 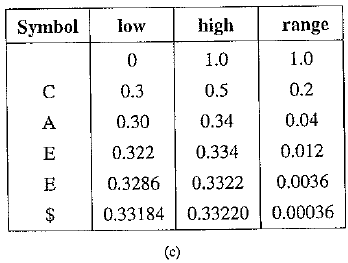 The final step in encoding calls for generation of a number that falls within the range [low, high). Although it is trivial to pick such a number in decimal, such as 0.33184, 0.33185, or 0.332 in the above example, it is less obvious how to do it with a binary fractional number. The following algorithm will ensure that the shortest binary codeword is found if low and high are the two ends of the range and low < high.

It can be proven that upper bound. Namely, in the worst case, the shortest codeword in arithmetic coding will require k bits to encode a sequence of symbols, and

where Pi is the probability for symbol i and range is the final range generated by the encoder. Apparently, when the length of the message is long, its range quickly becomes very small, and hence log2 1 / range becomes very large; the difference between log2 1 / rangeand {log21 / range} is negligible.

Moreover, Huffman coding cannot always attain the upper bound illustrated in Eq. It can be shown (see Exercise ) that if the alphabet is [A, B, C] and the known probability distribution is Pa — 0.5, PB = 0.4, Pc = 0.1, then for sending BBB, Huffman coding will require 6 bits, which is more than, whereas arithmetic coding will need only 4 bits.

In the above discussion, a special symbol, $, is used as a terminator of the string of symbols. This is analogous to sending end - of - line (EOL) in image transmission. In conventional compression applications, no terminator symbol is needed, as the encoder simply codes all symbols from the input. However, if the transmission channel / network is noisy (lossy), the protection of having a terminator (or EOL) symbol is crucial for the decoder to regain synchronization with the encoder. The coding of the EOL symbol itself is an interesting problem. Usually, EOL ends up being relatively long.