What are the current trends that follow in mobile computing?

The Global Positioning System (GPS) is a space-based satellite navigation system developed by united states of America. It helps to trace out the location and time information in all weather, anywhere on or near the Earth. It gives signals to the unobstructed line of sight to four or more GPS satellites. The GPS does not require user to transmit any data and it operates independently. The GPS program provides critical capabilities to military, civil and commercial users around the world. In addition, GPS is regarded as the backbone for modernizing the global air traffic system, weather, and location services.

LTE is a wireless communication with high-speed data used for mobile phones and data terminals. It is based on the GSM/EDGE and UMTS/HSPA network technologies that increase the capacity and speed using new modulation techniques. It is related with the implementation of fourth Generation (4G) technology.

WiMAX (Worldwide Interoperability for Microwave Access) is a hottest wireless communications standard designed to provide 30 to 40 megabit-per-second data rates, with the latest update providing up to 1 Gbit/s for fixed stations. It supports fixed and nomadic wireless applications. It is a part of a fourth generation or 4G wireless-communication technology. WiMAX far surpasses the 30-metre wireless range of a conventional Wi-Fi Local Area Network (LAN), offering a metropolitan area network with a signal radius of about 50 km. WiMAX provides data transfer rates that can be superior to conventional cable-modem and DSL connections, however, the lower speed of Wimax is due to the sharing of bandwidth must among multiple users.

Near Field Communication (NFC) is a set of standards that are used for smart phones and similar devices to maintain radio communication with each other by touching them together into close proximity, not more than a few centimeters. Near field communication used in contactless transactions, data exchange, and simplified setup of more complex communications such as Wi-Fi. Communication is also possible between an NFC device and an unpowered NFC chip, called a "tag".

With the rapid growth and increase in advanced technology, integrated circuitry and increase in computer processor speeds, the future of mobile computing looks amazing. With mobile computing, people working lifestyle will change as majority of people work from home. Due to its flexibility they can work from any location they wish to as long as the connection and the security concerns are properly installed. The reason for promoting the use of mobile computing is the availability of high speed connections.

Being an ever growing and increasing technology, mobile computing will continue to be a core service in computing, and Information and Communications Technology. It play’s a tremendous role in today’s life and this field is still rapidly developing day by day. 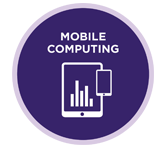