Metrics are report components that enable analytical calculations against the warehouse data. Metrics can be categorized as one of the following types, based on their formula:

Recall that a metric formula determines the data to be used and the calculations to be performed on that data.

The following are examples of simple metrics:

The level, or dimensionality, is the level of calculation for the metric, such as year or customer. Simple metrics can also contain filtering, called a condition, or offset values, called transformations. These are not required components, as are the formula and level. All of these components are discussed in detail in the section Definition of simple metrics.

Simple metrics have been briefly addressed in the Metrics Essentials chapter of the Basic Reporting manual. These basic metrics are generally created early in a project life cycle. They can be used on their own or as building blocks for compound metrics. An example of such a metric that calculates revenue is shown as follows:

Simple metrics can also contain multiple facts, as in this metric definition:

Notice that the level, represented by {~+}, is set on the entire metric. This concept is important to distinguish between simple and compound metrics.

A nested metric provides a convenient way to use metric functionality when fact tables in the warehouse do not include attribute data at the level desired for specific analysis purposes. By using the result of a metric calculation as a temporary fact table from which to calculate another metric, you can obtain and analyze data not immediately available. For example, if you need time data aggregated at the month level, but existing fact tables provide only day-level information, you can use nested aggregation to obtain the results you are looking for.

In their structure, nested metrics:

The following is an example of a nested metric:

The {~+, month+} dimensionality applied to the Sum metric means that the metric is calculated at the month level regardless of what appears on the report.

The {~+, year+} dimensionality applied to the Avg metric means that the metric is calculated at the year level.

A compound metric can contain the Revenue Metric as shown below:

Note that no level is set and Rank is a non-group function.

Non-group functions are OLAP and scalar functions such as rank.

A compound metric can also include expressions that act as metrics, such as:

Notice that while both the average functions have a level (Year), the metric as a whole does not.

Compound metrics can contain prompts and constantnumerical values, but cannot include conditions, levels, or transformations except for those already part of the simple metric they contain.

Compound metrics are automatically updated when changes occur in the definitions of the metrics they include.

Derived metrics are discussed in detail in the section Creating metrics in the Report Editor.

Distinguishing between simple and compound metrics

It is easy to distinguish between simple and compound metrics in the Metric Editor. Compare the following examples: 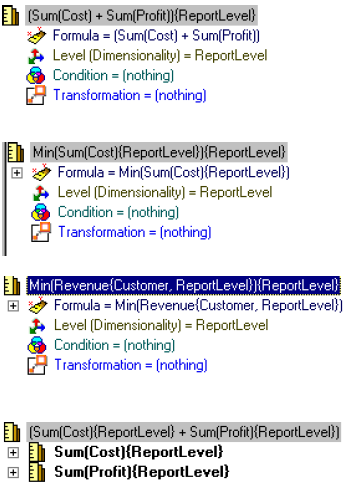