The best design for a hierarchy is to organize or group attributes into logical business areas. For example, you can place related attributes into hierarchies by their level. 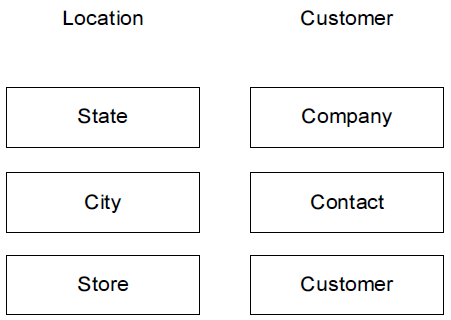 The system hierarchy is a structure based on relationships you define between attributes. A user hierarchy allows you to logically define and order groups of attributes. Both the system and user hierarchies allow you to navigate and organize attributes in your project.

When you group attributes together into hierarchies, you are developing a working design of the display and browse functions of the attributes. In the example below, there aretwo instances of the Region hierarchy. One hierarchy demonstrates Region having multiple States and the States having multiple Stores.

This hierarchy allows you to create drilling and browsing options to the lower levels to view Region, State, and Store on a report. But if you only include Store in the Regionhierarchy, as in the second example, then the only options for drilling or browsing are the Region and Store levels. 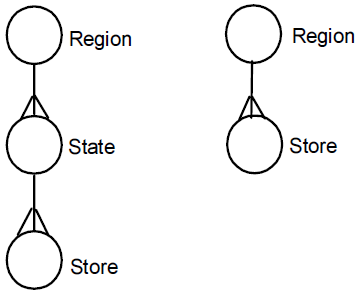