Metrics are constructed of components that differentiate one metric from all others and also serve as criteria for defining the calculations and data included in each metric.

Simple metrics include these components:

Recall from Distinguishing between simple and compound metrics that a metric defined similar to the following is a simple metric:

This metric calculates the yearly average of monthly sales, and is actually two metrics. In the metric definition pane of the Metric Editor, the inner metric is contained within the outer metric. To view the definition of the inner metric, you must expand the formula of the outer metric. It is a simple metric because it can contain a level, condition, and transformation at its highest level, as illustrated by this screen shot from the Metric Editor:

The inner metric is Sum([Revenue]). Recall that this was previously defined as a simple metric. The code {Month} within the same set of parentheses indicates that this data is tallied at the month level, regardless of what appears on the report. Once this information is calculated, the second metric is performed, that is, the result from the first metric is averaged at the year level. The following diagram represents this process.

This type of metric provides a convenient method for multistep calculations when fact tables in the warehouse do not provide data at the appropriate higher level for subsequent calculations. You can therefore use the result of a metric calculation as an intermediate result set for calculating another metric. For example, your existing fact tables provide revenue figures for each day, but you need monthly sales information. Using this kind of metric allows you to obtain the monthly figures.

This is the essential part of the metric definition. The formula of a simple metric is a mathematical expression consisting of group functions, such as sum, average, minimum, maximum, and so on. It also includes the data to be used in the calculations. This can include facts, attributes, constants, and other metrics. The formula can also contain a non-group function or arithmetic operator, in addition to the required group function.

In SQL, the formula becomes part of the SELECT clause of the SQL command.

The MicroStrategy Function Plug-In Wizard can be used for defining custom functions relevant to your business case ascenarios. The Intelligence Server makes no distinction between these custom functions and the ones provided by default. These custom plug-in functions are indistinguishable from all other functions or operators, such as Sum, Average, Min, Max, Count, -, +, /, or *.

The Function Plug-In Wizard guides you through the creation and implementation steps. It helps you create a Microsoft Visual C++ project with placeholders where you can add custom analytic code. After adding your function-specific C++ code and building your project, you can launch MicroStrategy Desktop to import your new function plug-in to be used for all the reports. Deployment occurs on each Intelligence Server system that will use it. The execution step is also performed in MicroStrategy Desktop, when you create metrics and reports using the new function. For detailed information on each step, see the Function Plug-In Wizard online help. The MicroStrategy online help also provides instructions on importing the functions.

The Function Plug-In Wizard must be installed and activated before you can create and implement custom plug-in functions. The self-extracting installation file, named FPWizard.exe, is located in the ...MicroStrategyDesktop directory.

The level of a metric, also referred to as dimensionality, allows you to determine the attribute level at which the metric is calculated. In addition, you can specify the grouping and filtering involved in a metric.

The concepts underlying the term level in the context of MicroStrategy metrics are interchangeable with those of dimensionality. The term level is used throughout this manual.

All metrics, by default, calculate at the report level. This means that the attributes on the report template dictate how the metric is aggregated. For example, if the report shows revenue by year and month, the numbers are calculated to reflect monthly sales data. However, you can specify any set of attributes as the calculation level of a metric.The engine determines the set that is at the lowest level; for example, Region, Month, and Year resolves to Region and Month.

By default, the report level is part of the metric level. This allows for more flexibility in the use of the metric.

The elements needed to specify a level for a particular metric are:

Clicking Reset on the Level pane of the Metric Editor changes the level unit back to the default of report level for the target and standard for filtering and grouping.

The target is the attribute level at which the metric calculation groups. It determines the table to use to calculate the metric. Any set of attributes or a hierarchy can be the target. A special case is the default target, which is report level.

Grouping determines how the metric aggregates. The result of this setting is reflected in the GROUP BY clause of the SQL command. The grouping options for levels include

The remaining options are only used for nonaggregatable metrics. A nonaggregatable metric is one that should not be aggregated across an attribute. An example is an inventory metric. While the data warehouse may record the inventory every month, these monthly numbers are not added together to calculate the yearly inventory. Instead, you may want to use the End-On-Hand and Beginning-On-Hand inventory numbers to see how the total inventory changed over the year. These grouping options, described below, are used in such cases:

Setting a metric level to one of the options listed above defines the metric as nonaggregatable. Whether you select a fact or lookup table largely depends on how the necessary information is stored. For example, to find the Beginning-on- Hand inventory for a particular item, you need to know how the inventory information is stored. If the inventory count isnot taken on the first day of the week, as the lookup table requires, the inventory count should be taken from the fact table for the first recorded entry.

There is another important difference between accessing a fact table and a lookup table. If a value, such as April sales, is missing from a fact table, the row still exists in the table and is reported as null or zero. If that same value is missing in a lookup table, the April row does not exist. The previous or next value (March or May) is reported, depending on whether the level is set to beginning or ending value.

A revenue metric is defined as: Sum(Revenue){Quarter} The level target is set to quarter, with standard grouping. When this metric is placed on a report with quarter, the results are shown below. 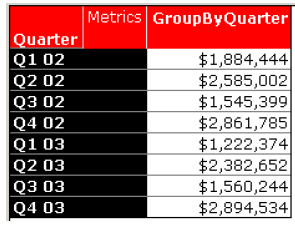 Notice that the sales are calculated for each quarter, because the metric is grouping at the quarter level, as shown in the SQL:

Using the same metric on a report with month, however, yields the following results. 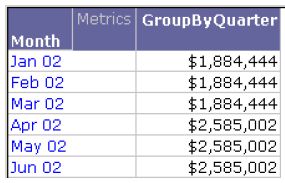 This is only a subset of the report.

Although each month is listed, the value for each month in a quarter is the same. The metric is calculating quarterly revenue, based on the grouping level set on the metric. The SQL for this report is, in essence, the same as the previous example:

Change the grouping to none on that same revenue metric and place it on a report with year. Because year is a parent of quarter, the metric can roll up to the year level. The report and its SQL are illustrated below.

A total year sales fact table exists in the project, which would be more efficient. Instead of adding all the quarters together, the yearly total could have been pulled directly from that table. However, having quarter in the level of the metric forces the report to use the quarter sales table.

If the same revenue metric, with the grouping set to none, is used on a report with month, the results are shown below. 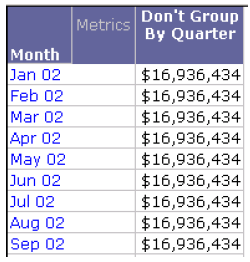 The metric calculates the same number for each month—the total for all the months included on the report. Because month is a child of quarter, month is excluded from the group by clause:


Inventory is one example of a nonaggregatable metric. The following metric definition reports the inventory on hand at the end of the month. The level is set at the report level and at month, with a grouping of ending fact, so that the last entry in the fact table is used.

A report contains this metric and the month attribute. The last entry for each month in the fact table is placed on the report. No calculation is performed. 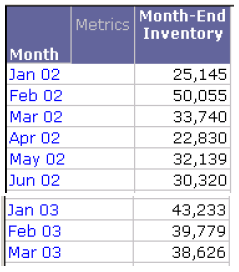 This is only a sample of the report, not the entire report. 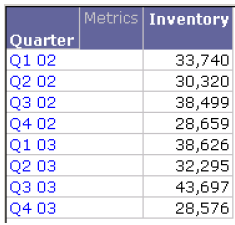 The filtering setting governs the relationship between the report filter and the calculation of the metric. The filtering options are:

Consider the following report as a baseline to show the revenue for each month and quarter. 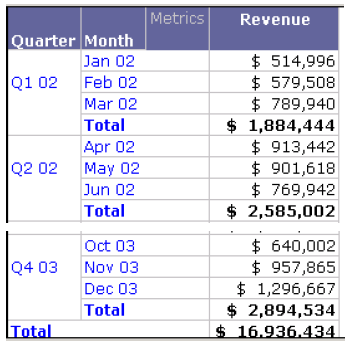 All of the metrics in these examples have grouping set to none. None of the reports are presented in full; they are only subsets of the complete report.

A revenue metric is defined with quarter as the target and standard filtering. A report is created with month, quarter, this new revenue metric, and a filter for January 2002. When the report is executed, the revenue is the same for every row, as shown below. All months are included on the report, even though the report filter is January 2002. This is an effect of setting the grouping to none. Since quarter in the target is a parent of month in the filter, all months are included on the report. The metric value is the grand total of the filter, in this case, January 2002 only.

The same report is created with a metric set to absolute filtering. When the report is executed, the revenue is the same for every row, as shown below. Because of the absolute setting, the report filter rolls up to the level of the metric—that is, month is elevated to quarter. Because the report is filtered for January 2002, the value is revenue for the first quarter of 2002. 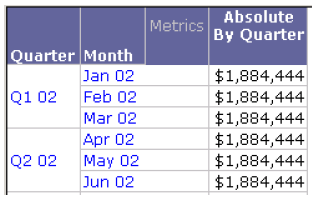 The same report is run, but this time with a metric that has level filtering set to ignore. Again the metric value is the same for the whole report, but now it is the grand total of all sales in the project. Since month is related to quarter, the filter is also ignored. 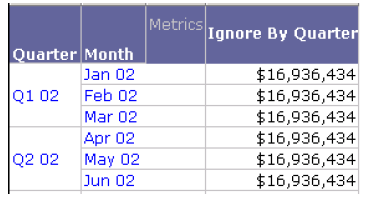 The advanced options for metric levels include the following settings:

The best way to explain the Add attributes in the filter to the level setting is with an example. The following reports all contain first quarter revenue for books sold in California stores, but depending on the Add attributes setting, that revenue amount changes.