A compound metric does not have to perform an additional aggregation as a simple metric does. The two metrics can be calculated individually, instead. The results are used to compute the final result, as shown in the following figure. 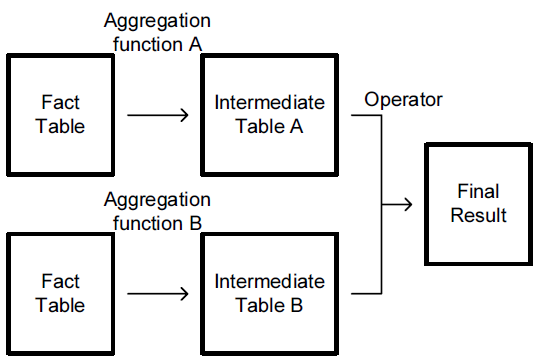 For example, to calculate a profit margin, you can divide a profit metric by a revenue metric, as shown below:

Note that this compound metric does not contain any levels; all of the level information is included in the separate metrics.

The smart metric property of a compound metric allows you to change the default evaluation order of the metric. For example, the following report contains information about sales. If you display totals without allowing smart metrics, the totals are incorrect.

The Ratio column is summed to achieve the total shown. To calculate the correct answer, the total should be based on the totals in the other Total Sales and Discount Sales columns instead. Once smart metrics are allowed, the report looks like the following:

To toggle smart metrics on and off, use the check box at the bottom of the Subtotals/Aggregation tab in the Metric Editor.

MicroStrategy now offers dimensionally-aware subtotals, so the right answer is provided regardless of the smart metric setting. The only limitation for dimensional smart metrics is that subtotal values cannot be aggregated to a level higher than the metric itself, as illustrated below. The Items Sold and Contribution metrics cannot be rolled up to the year level. Turn off smart metrics in this case to achieve these results.