You can create metrics in the Metric Editor, the Report Editor, or the Command Manager. This chapter as a whole describes the concepts behind metric creation in all of these components.

This section discusses metrics created on the fly in the Report Editor, which are called derived metrics. Derived metrics allow you to create calculations based on the data already available on a report. A particular group of derived metrics, shortcut metrics, uses pre-built formulas.

One category of shortcut metric, the transformation metric, is not a derived metric. Unlike other shortcut metrics, they must be calculated in SQL rather than in the Analytical Engine.

A derived metric is developed in the context of a report, allowing you to create calculations based on the data already available in the report. For example, a report contains Revenue and Cost metrics. To calculate profit on the fly, create a derived metric in the Report Editor with the following definition:

For example, if you have a report with Calling Center, Unit Price, and Units Sold, you could create the following derived metrics:

Derived metrics are local to the report in which they are created. A derived metric created in a report is not a new metric and is not available to other reports.

Derived metrics are usually compound metrics based on the metrics that already exist in the report. The expressions of these metrics may include simple functions and OLAP functions, as shown in the examples below:

When you create a derived metric, you cannot access all of the advanced metric functionality, such as transformations and conditions. However, you can employ levels, or dimensionality.

If you define a derived metric using an aggregate function such as sum or maximum, you must also specify the level. The default is to group by nothing, as in SUM(Metric1){}. You can list specific report attributes, such as SUM(Metric1){Region, Employee} to force a specific level of aggregation. You cannot use other advanced metric capabilities. For example, filtering options such as Absolute and Standard filtering are not supported.

While you can create a non-derived metric such as SUM(Fact){~+} directly in a report, it becomes an embedded metric and exists only in the context of the report. Its definition can be edited or viewed, just as with a regular object. Metric formulas that contain facts or attribute forms will result in embedded metrics and will not be evaluated by the Analytical Engine like derived metrics.

Shortcut metrics are based on metrics already included in a report and provide a quick way to add new metrics to the report. They are available when you right-click on a metric column or metric header and are based on the selected metric.

Shortcut metrics belong to one of the following categories:

All shortcut metrics are derived metrics except for the transformation metrics, which must be calculated in SQL. All the shortcut types are described in more detail below.

Percent-to-total metrics display the percent, in relation to a selected total of each item affected by the metric. The total can be by column, by row, by page, for each value of the attribute, or the grand total. Associated calculation levels are shown in the following table. 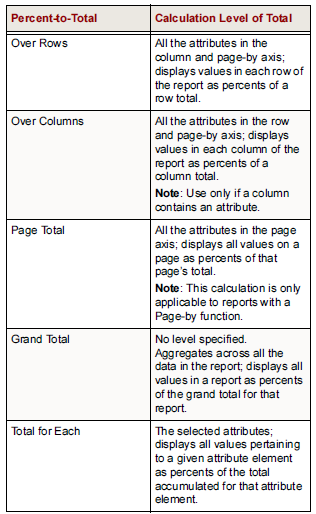 An example of a percent-to-total metric begins with the following report.

If Percent-to-Column Total is selected as the metric type, the information is displayed as follows.

Transformation metrics apply offset values, such as “four months ago,” to the selected attribute. For the MicroStrategyTutorial, the offset values for the shortcuts are

For each of these values, you can select what to calculate:

Rank metrics apply a ranking number to the metric values for a given attribute. When selected, this shortcut metric provides break-by options for each attribute on the report.

By default, the rank derived metric performs an ascending sort. To change it to descending, edit the metric and replace <ASC=True> with <ASC=False>.

Using a transformation metric affects the results of all subsequent executions of the report.