There are many companies that offer data mining applications and workbenches. These tools are specialized for the data mining workflow and are usually rich in data mining features and options. MicroStrategy Data Mining Services integrates seamlessly with these applications in the following ways:

You can use one of the following two options to provide the MicroStrategy dataset to third-party applications:

While there are many sophisticated data mining algorithms, some data mining techniques are fairly simple and do not require specialized tools. The MicroStrategy TrainRegression function can be used to create predictive models using the regression data mining technique. This technique should be familiar to you if you have ever tried to extrapolate or interpolate data, or tried to find the line that best fits a series of data points, or used Microsoft Excel’s LINEST or LOGEST functions.

Regression analyzes the relationship between several predictive inputs, or independent variables, and a dependent variable that is to be predicted. It does this by finding the line that best fits the data, with a minimum of error.

For example, you have a dataset with just two variables, X and Y, which are plotted as in the following chart: 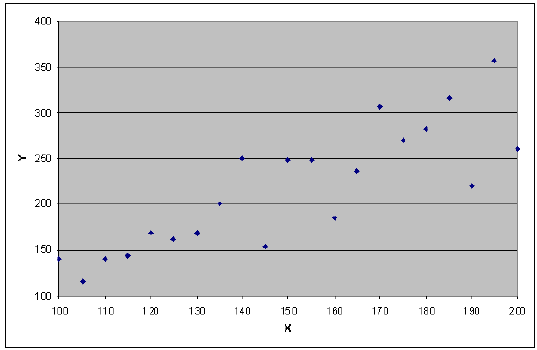 Using the Regression technique, it is relatively simple to find the straight line that best fits this data (see the following chart). The line is represented by a linear equation in the classic y = mx + b format, were m is the slope and b is the y-intercept. 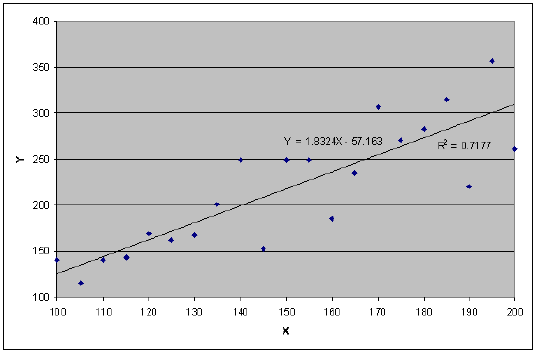 Alternatively, you can also fit an exponential line through this data (see the following chart). This line has an equation in the y = b mx format. 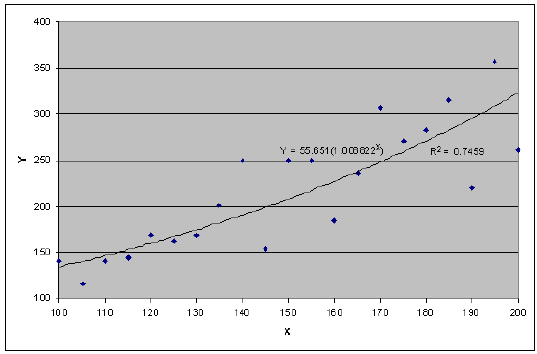 So, how can you tell which line has the better fit? There are many statistics used in the Regression technique. One basic statistic is an indicator of the “goodness-of-fit,” meaning how well the line fits the relationship among the variables. It is also called the Coefficient of Determination, whose symbol is R2. The higher the R, the better the fit. We can see that the linear predictor has R2 = 0.7177 and the exponential predictor has R2 = 0.7459; therefore, the exponential predictor statistically is a better fit.

The MicroStrategy TrainRegression function allows both types of Regression techniques. Both the linear and exponential Regression predictor can be created easily, with just one change to set the type of model.

First, let us create a metric using the TrainRegression function. As you can see from the following, the Train Regression metric has a set of metrics as its inputs, including the On-line Sales metric we are trying to predict (the dependent variable) and several metrics that describe each quarter (the independent variables). The order of these inputs in the metric’s expression does not matter. 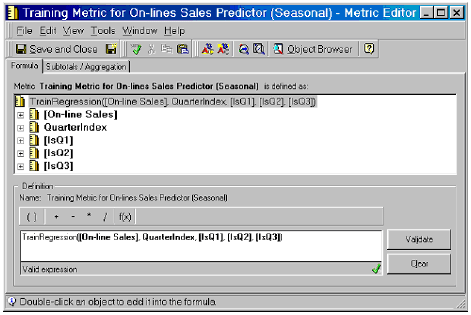 The TrainRegression Parameters have the following meanings:

Once you have created a metric with one regression type, it is easy to make another metric of the other type by simply copying the metric and changing the RegressionType parameter. It would be good to also change the ModelFileName and ModelName parameters so there is not any conflict with the original training metric.

When the report has completed execution, a file containing the generated PMML model can be found at the location specified by the training metric. This model can now be imported into a MicroStrategy project, which is the subject of the next section.