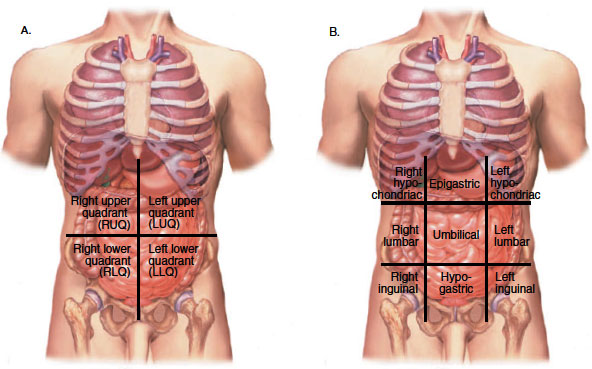 Quadrants are useful in describing the location in the body in which a surgical procedure will be performed. They also are useful in denoting incision sites or the location of abnormal masses such as tumors. A tumor located in the right lower quadrant will most likely be denoted in the medical record with the abbreviation RLQ.

Quadrants may also be used to describe the location of a patient’s symptoms. The physician may pinpoint a patient’s abdominal pain in the RLQ. Such a finding could indicate a diagnosis of appendicitis, because the appendix is located in that quadrant. Pain in another quadrant, such as the LLQ, would indicate a different diagnosis.

Whereas larger sections of the abdomin/o/pelv/ic cavity are divided into four quadrants, the smaller sections are divided into nine regions, each of which corresponds to a region near a specific point in the body. As with quadrants, body region designation is also used to describe the location of internal organs and the origin of pain. Review Figure Abdominopelvic quadrants and regions (B)Nine regions of the abdomen showing superficial organs. to see the location of various organs within these regions.

The right and left hypo/chondr/iac regions are located on each side of the epi/gastr/ic region and directly under the cartilage of the ribs.The lumbar regions consist of the middle right and middle left regions, located near the waistline of the body.

The center of the umbilic/al region marks the point where the umbilic/al cord of the mother entered the fetus. This is the navel or, in layman’s terms, the “belly button.” A hernia is a protrusion or projection of an organ through the wall of the cavity that normally contains it. A common type of hernia that may occur, particularly in males, is an inguin/al hernia.

A hernia on the right side of the groin is called a right inguin/al hernia The area between the right and the left inguin/al regions is called the hypo/gastr/icregion. This region contains the large intestine (colon), which is involved in the removal of solid waste from the body. 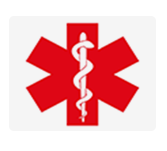