The Webster–Wind framework identifies and helps to assess key variables that influence an organization’s purchasing decisions, but does not concentrate on the process to any great degree. Sheth (1973) developed model that has some elements in common with the Webster–Wind framework but also has more of an emphasis on the psychology of the decision-making process. He identified the importance of four main factors that influence organizational buyer behavior:

Examples of task and non-task influences on organizational buying

The model is constructed so that the flow of the actual decision-making process can be illustrated (Figure Below). 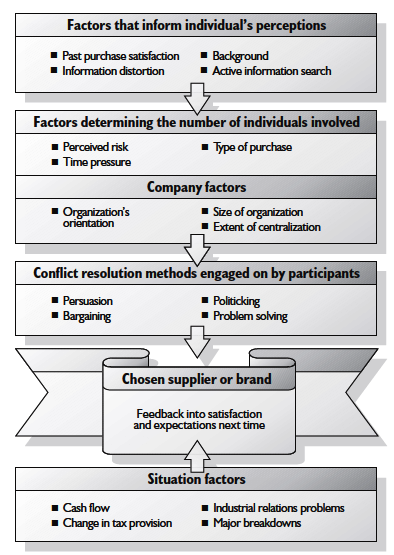 A model of organizational buyer behaviour

The expectations of the members of the DMU

Every individual in the DMU will have their own attitudes and particular background that shapes the way in which they judge a supplier. An engineer will use different criteria from an accountant. Individuals’ expectations will be determined by their educational background,their job or task orientation and their lifestyle in general. Individuals will also be influenced by information from a range of sources. When the purchase being considered contains a high level of risk to the organization it is likely that a rigorous process will be undertaken to identify as many sources of information as possible.

This information search is likely to be undertaken by the professional buyers and can lead them to play an important gate keeping role by choosing what information is passed on to other members of the DMU. The information provided, as with any communication, will be subject to perceptual distortion by the individuals in the DMU. Individuals’ expectations will also be influenced by their previous experience of the product or service.

The factors influencing the buying process

The Sheth model outlines two sets of factors that will determine the particular buying process for a specific product or service.The first set of factors relates to the product itself:

The second set of factors that influence the buying process is related to the organization itself:

Character of the decision-making process

The manner in which these conflicts are resolved affects the final decision. The model outlines four approaches to making decisions:

Finally, the model highlights situational variables that are outside the control of the organization but influence the DMU. These variables would be such things as:

These two models illustrate the complexity of the buying process in organizations. They also give some insights into potential factors that can be used to identify organizational market segments. 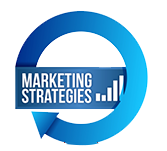