What is Decision Support System?

Decision making is an important part managing organizations successfully. Decision support systems (DSS) is a computer based software application system where the business data is analysed in the form of information and presents it to the user so that the user can take meaningful business decisions more easily. It is intended to help managers in decision-making by accessing large volumes of information produced from various related information systems involved in organizational business processes, such as office automation system, transaction processing system, etc.

DSS uses the summary information, exceptions, patterns, and trends using the models analytically. A decision support system helps in decision-making it doesn’t mean that it does necessarily give a proper decision itself. The decision makers or managers compile useful information from raw data, documents, personal knowledge, and/or business models to identify and solve problems and make right decisions.

There are two types of decisions - programmed and non-programmed decisions.

For example, investing in a new technology is a non-programmed decision.

Attributes of a DSS

Characteristics of a DSS

Components of a DSS

What are the components of DSS?

Following are the components of the Decision Support System:

There are several ways to classify DSS. Hoi Apple and Whinstone classifies DSS as follows:

Following are some typical DSSs: 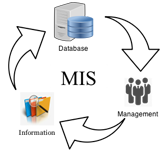