What is the use of functions in Lua?

Function in Lua is a group of statements which perform a task together. Code can be divided into separate functions and the division usually unique. Therefore each function will perform a specific task.

Lua language offers several built-in methods which can be called by a program. For example, method print() to print the argument passed as input in console.

A function can be known with different names like a method or a sub-routine or a procedure etc.

Method definition in Lua programming language will consist of a method header and a method body. All the parts of a method are mentioned below

Below is the source code for a function called max(). This function takes two parameters num1 and num2 and returns the maximum between the two

If a function wants to use arguments, it should declare the variables which accept the values of the arguments. These variables will be called as the formal parameters of the function.

While creating a Lua function, you will be providing a definition of what the function has to do. To use a method, you should call that function to perform the defined task.

To call a method, you just have to pass the required parameters along with the method name and if the method returns a value, then you can store the returned value. For example

In Lua, a function can be assigned to variables and they can also be passed as parameters of another function. Below is a simple example for assigning and passing a function as parameter in Lua.

Functions can be created with variable arguments in Lua using '...' as its parameter. You can understand this better by seeing an example in which the function returns the average and it can take variable arguments. 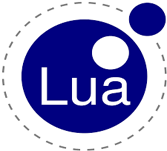