What is Error Handling in LISP?

In LISP, the condition handling system has three parts:

New condition objects are created with MAKE-CONDITION macro, which initializes the slots of the new condition based on the :initargs argument.
The following code defines the condition in the below example:

The signalling mechanism finds the most recently established handler that is compatible with the condition type and calls its function, when a condition is signalled.
The macro handler-case establishes a condition handler. The basic form of a handler-case:

The form of each error clause:

Where each binding is a list of the following:

The invoke-restart macro finds and invokes the most recently bound restart function with the specified name as argument.
You can have multiple restarts.

The above concepts are demonstrated by writing a function named division-function, which will create an error condition if the divisor argument is zero.
There are three anonymous functions that provide three ways to come out of it - by returning a value 1, by sending a divisor 2 and recalculating, or by returning 1.

Create a new source code file named main.lisp and type the following code in it.

When you execute the code, it returns the following result:

The 'Condition System' discussed above in Common LISP also provides various functions that may be called for signalling an error. Handling of an error, when signalled, is however, implementation-dependent.

In this example, the factorial function calculates factorial of a number; however, if the argument is negative, it raises an error condition.

Create a new source code file named main.lisp and type the following code in it.

When you execute the code, it returns the following result: 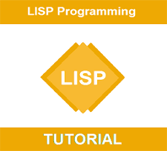