This field contains the reference count for this skb. It is incremented each time the buffer is cloned.

Nr_frags is the number of fragments in this packet. This field is used by TCP segmentation.

The next two fields are used for devices that have the capability of doing TCP segment processing in hardware. This is the network device feature, NET_F_TSO.

This field points to the list of fragments for this packet if it is fragmented.

This is the array of page table entries. Each entry is actually a TCP segment.

This structure is placed at the end of the attached data buffer and pointed to by the end field in the socket buffer structure, which points to the end of the data portion of the packet. However, end is also used to find the beginning of skb_shinfo in the attached data buffer because it immediately follows the data portion of the regular packet. Skb_shared_info has several purposes, including IP fragmentation, TCP segmentation, and keeping track of cloned socket buffers. When used for IP fragmentation, skb_shared_info points to a list of sk_buffs containing IP fragments. When used for TCP segmentation, this structure contains an array of attached pages containing the segment data. The handling of TCP segments is more efficient than IP fragments. IP fragmentation is not quite as common as it was in earlier days of the Internet. Fragmentation is used when a network segment has a smaller MTU than the packet size. IP< fragmentation is necessary if the MTU of the outgoing device is smaller than the packet size. for more details about IP fragmentation. TCP segmentation, however, is far more common because it is the underlying mechanism for the transport of streaming data that occurs in most network traffic Skb_shinfo can also be used to hold TCP segments. When used this way, skb_shinfo contains an array of pointers to memory mapped pages containing TCP segments. TCP provides a streaming service that makes the data look like an uninterrupted sequence of bytes even though the data must be split up to fit into IP packets. See “Sending the Data from the Socket through UDP and TCP," for more information about TCP segmentation. When a socket buffer is cloned, skb_shared_info is copied to the new buffer.

The second field in the shared info structure, nr_frag, is not used for IP fragmentation; instead, it is for TCP segmentation. A socket buffer containing segments is indicated when this field contains a nonzero value. The value of nr_frag corresponds to the number of segment pages attached to the socket buffer, and the shared_info structure contains pointers to the segment pages in the field frags. The array of frags is placed in memory immediately after the nr_frag field. It can contain as many as six pages in the array. The actual number of locations in the array will depend on the hardware architecture and the configured page size, PAGE_SIZE. Each of the elements in the frags array points to a memory-mapped page in the Linux virtual page table array.

When a socket buffer created by TCP contains a chain of segments, each sequential segment’s data is in a separate memory mapped page pointed to by a location in the frags array. This is considerably more efficient than maintaining a redundant sk_buff structure for each TCP segment. Once TCP is in the ESTABLISHED state, the packet headers for subsequent segmentsn are nearly identical so the packet header can be shared among each of the segments. Processing time is saved during processing by not requiring Linux to copy a complete IP header for each segment.

Each location in the frags array consists of the skb_frag_t structure defined in file linux/include/linux/skbuff.h. The size of the frags array is calculated to hold a total of 64 Kbytes of data.

Page is a pointer to a page table entry. The next field, offset, is the offset from the start of the page to where the data begins. Size is the length of data in page.

Figure is an illustration of a socket buffer containing an array of TCP segments. 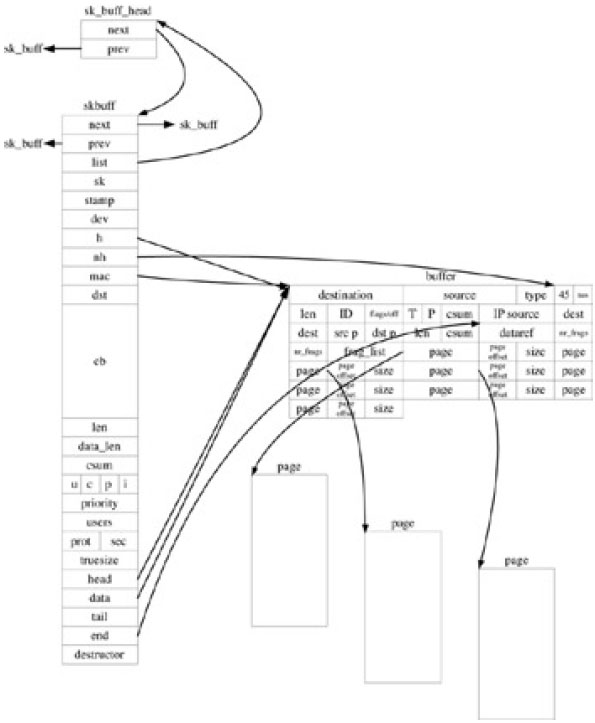