How to create Authentication system?

Base64 is being encoded with the string. For instance, for username ‘Ayush’ and password ‘India’ the string appears as “Ayush:India” and is sent in the authorization header encoded as:

How to implement Authentication system in Koa.js?

In app.js file, enter the code:

By the above code, error handling middleware is created to handle all the errors related to authentication. Two routes are created.

A request without an authentication header sent to /protected will result in an error. For instance,

The response appears as:

A request with correct credentials result in expected response. For instance,

The response appears as: 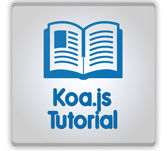