It is not allowed to drop o_ the end of a method body. A compile-time error occurs if the body of a method can complete normally. It is also a compiletime error if a statement cannot be executed because it is unreachable. Every Java compiler must carry out a conservative ow analysis to make sure that all statements are reachable. For this purpose two static predicates reachable and normal are computed at compile-time. The predicates have the following intended meanings:

The reachability analysis is also used in in the proof that bytecode generated by the Java compiler of Part II is accepted by the bytecode veri_er. There, one has to show that execution cannot jump out of the code of a method.

At the root position of a method body the predicate reachable is determined by the following initial conditions: Let _block be the body of an instance method, constructor or class method or a static initializer. Then reachable(_) is True.

For the other positions in the block the predicates reachable and normal can then be computed in a top-down manner. Instead of explaining exactly how the functions are computed, in Table below we just state the equivalences the predicates have to satisfy. Constant boolean expressions are not treated the same way in all control structures. For example, in the while statement 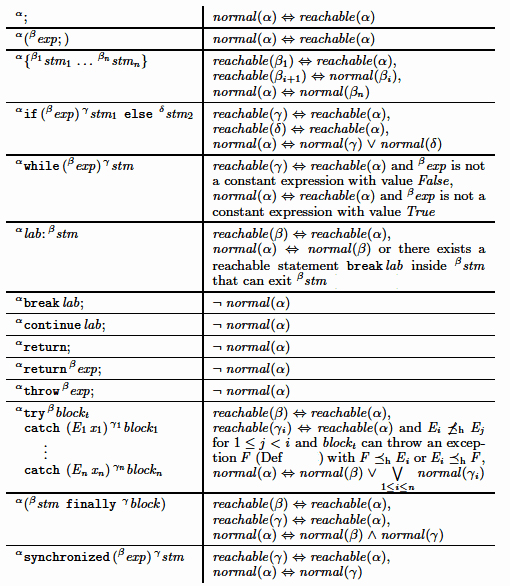 For positions in expressions the predicate reachable is determined by the following de_nition.

If an abruption occurs in a try block, the corresponding finally block is executed before the abruption moves upwards. If the finally block does not complete normally, the old abruption is discarded and cannot exit the try-finally statement.

De_nition(Abruption can exit statement). An abruption at position _ can exit stm, if for every substatement _(s finally _b) of stm such that _ is in s the predicate normal(_) is true.

De_nition (Statement can throw exception). A statement stm can throw an exception E, if one of the following conditions is true:

At run-time the current position is always reachable. If a statement completes normally, then the statement is normal. The converse is not true. There are normal statements which can complete abruptly.

For example, in an if-then-else-statement one branch may be normal whereas the other branch completes abruptly.