Since the veri_er works at link-time, it operates only on the type components of the items stored in registers and on the operand stack, as introduced for the defensive VM. These type components constitute a type frame. For each instruction, the veri_er tries to simulate the e_ect for all possible successors.

To determine the successor type frame, in this section a function succ is de_ned by stepwise re_nement for each of the submachines.

Fig. below de_nes the extension of succI to the function succC . In contrast to the registers and to the operand stack that are weakly typed, class _elds in JVMC are strongly typed: every _eld lways holds a single type. In contrast to the defensive VM, the veri_er therefore uses the declared type of the global _eld which is stored as _rst parameter in GetStatic and PutStatic instructions. Similarly, for method invocations the declared return type is propagated to the successor type frame. Since the e_ect of a return instruction is to leave the given method, such instructions generate no successors in that method.

The defensive VM keeps track of the initialization status of objects by adding information to the generated run-time reference via the dynamic function initState. For link-time veri_cation this run-time information has to be simulated in the type system.

At link-time, di_erent New instructions can be distinguished by their instruction index. However, this information does not denote uninitialized objects uniquely. For instance, it does not su_ce to distinguish di_erent runtime instances of New which is part of a loop body. But if we require that the uninitialized type that we generate when we simulate a New instruction is neither in any of the type registers nor in the type operand stack, then this assures uniqueness of the type description. The successor of New in Fig. below replaces the uninitialized type on the operand stack with the verify type unusable and _lters out all registers with the uninitialized type such that they are not available at the successor code index. We do not add this as a check to the function checkO in Fig. below, because that would violate the monotonicity property of Lemma. 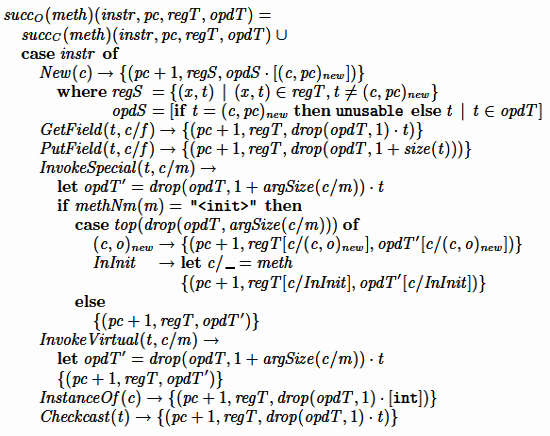 The function succE reects the consequences of exception handling and embedded subroutines. We _rst consider which handler frames have to be included as possible successors of JVME instructions. For Athrow instructions the control proceeds according to the exception table of the method. Therefore every possible handler of the thrown exception provides a candidate for a successor instruction. It would be wrong to restrict the successors of the Athrow instruction to those handlers (from; upto; handle; _) for which c v _ , where c is the topmost type on the operand stack. At run-time the topmost reference on the operand stack will be of a subtype of c and could be caught by a di_erent handler.

Several instructions might throw run-time exceptions. Therefore, the handlers which catch run-time exceptions have to be included in the successors, too. Moreover, the VM might throw a VirtualMachinError almost at any position in the bytecode. Therefore, for each code index and each instruction, except for Jsr, Goto, Return and Load, we include into the set of possible successors all handlers which protect the code index.

Some instructions do not throw exceptions (; CD) 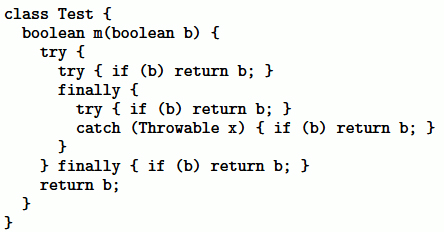 It seems that this simple de_nition is good enough for bytecode generated by a Java compiler. We assume that the instructions Jsr, Goto, Return and Load wich are used for the compilation of the continue, break and return statements do not throw exceptions. Therefore they do not have successors via the exception table. Otherwise, programs like the one in Fig. below would be rejected by our veri_er.

The instruction Jsr(s) pushes the type retAddr(s) on top of the operand stack indicating that this is a return address to a caller which has called subroutine s. The successor of a Ret instruction is not de_ned in the function succE. Instead, it is treated as a special case in the de_nition of bytecode type assignments in the next section, and also in the de_nition of type propagation in the bytecode veri_er. The reason for this is that a Ret instruction does not return all local registers, but only the registers the corresponding subroutine has modi_ed. The types of the other registers have to be propagated from the caller of the subroutine.