To some dynamic functions we add threads as superscripts. For example, posqn is the value of pos for thread q in the nth state of the run. The thread superscripts allow us to make statements about the local states of threads without distinguishing between the current thread and other threads.

De_nition(Context functions). For each thread q the functions

e current thread in state n is di_erent from q, then

The functions are de_ned only if q is a valid pointer of type Thread in the nth state of the run, i.e., if q 2 dom(heapn) and classOfn(q) _h Thread.

When a thread executes Java code, control walks through the abstract syntax trees of method bodies. It enters expressions and statements, evaluates them and yields the results upwards for further processing. When methods are invoked or classes are initialized, new frames are pushed on the stack of the thread. When the methods return, the frames are popped again.

We write l1 vpre l2, if the list l1 is a pre_x of l2. For positions _ and _,_ vpre _ means that _ is below _ in the abstract syntax tree. For stacks, frames1 vpre frames2 means that frames2 is an extension of frames1.

What does it mean that a thread enters a phrase in a certain state of the run of the ASM? It means that in that state in the run, the thread is the active thread and the phrase is the phrase at the current position in the body of the current method, and it is unevaluated. At some positions, however, static initializers are called for the initialization of classes. When control returns from the class initialization, the phrase at the current position is still the same as before the initialization and so the thread `enters' the expression a second time. This second `entering' is excluded in the following de_nition.

What does it mean that a thread evaluates a phrase in a certain interval of the run of the ASM? It means that the thread enters the phrase at the beginning of the interval and stays inside the phrase during the interval. The only changes made to restbody are inside the phrase. The local environment can be changed and extended during the evaluation because expressions and statements have side e_ects. The stacks of frames at the beginning and at the end of the interval are the same.

The ASM formalism allows us to speak about steps in a run of a machine.

Since the steps in the run of JavaT are di_erent from the steps of the single threads, we need some terminology to speak about the steps of an individual thread. The previous step of a thread is (the number of) its step which was done in the last state in the run of the ASM where the thread has been the current thread.

De_nition(Previous step). The previous step of thread q before n is m, if

The walk of the current position through the body of a method can branch at certain positions. For most positions in the abstract syntax tree, however, when they are entered the preceding position is uniquely determined. It is called the predecessor of the position.

De_nition(Predecessor). Position _ is a predecessor of position _ in method _ (written _ __ _), if for each thread q of state n which is in _ at n and enters _ at n there is a previous step m of q before n such that

The direct subexpressions of an expression 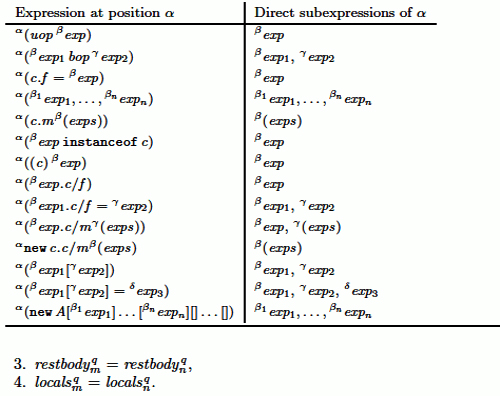 Proof. By induction on the run of execJavaThread. If the rule executed in the step of the ASM moves the current position upwards or does not move the position at all, nothing has to be shown, because in that case by de_nition, the thread in the current position does not enter an expression or statement.

Hence the rules which move the current positions inwards or forwards have to be considered only. ut

The stack of a thread may grow and shrink. New frames are pushed on the stack when class or instance methods are invoked, when class initializers are executed, or when new instances are created and a constructor is called.

The positions which cause the growth of the stack are categorized as follows:

The predecessors of expressions and statements 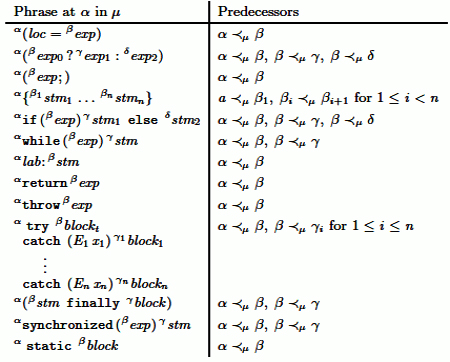 De_nition(Run method). We say that C=m is the run method of thread q, if

The ASM rules which change the stack of a thread are invokeMethod and exitMethod. A new frame is pushed with invokeMethod when a class is initialized, when a class or instance method is invoked, or when a new instance is created and a constructor is invoked. A frame is popped with exitMethod when a value is returned to the invoking frame or when an exception is passed to the invoking frame. The next lemma simply states, that the current method has been called at some point in the past. The lemma must be proved simultaneously with Lemma.

Lemma 3 (Invocation). For each thread q of state n in the run of execJavaThread, either methqn

Proof. By induction on the run of execJavaThread. In most steps of the run the frame stack of a thread remains unchanged and nothing has to be shown. A class or instance method is invoked at a method invocation position.

This means that all changes made to restbody occur in the subtree rooted at the current position. Outside of this area, restbody is not touched.

Lemma(Evaluation). For each thread q of state n in the run of execJavaThread, if posqn = _, then there exists an m _ n such that thread q evaluates _ on the interval [m; n].

Proof. By induction on the run of execJavaThread. Lemma is used when values or exceptions are returned to the parent frame. ut

Lemma . For each thread q of state n in the run of execJavaThread,

Proof. By induction on the run of execJavaThread. Lemma is used when the current position moves to the next subexpression. ut