The capital Latin letters A, B, C have been used to denote primitive types.

By convention, classes or interfaces A, B, C are identi_ers starting with an upper case letter. Interfaces are often denoted by I , J .

contains a schematic de_nition of a Java class. The parts in angle brackets are optional. The keywords public, abstract and final are called modi_ers. We say that the class is m, if the modi_er m appears in the de_nition of the class.

Constraint. The class de_nition in Fig. below must satisfy the following constraints:

Syntax of a Java class 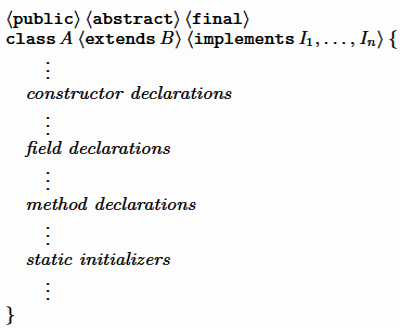 Constraint . The interface de_nition in Fig. below must satisfy the following constraints:

Let _h be the transitive closure of _d. This means that A _h B holds if, and only if, B can be reached by a _nite number of direct _d steps. The relation _h is called the inheritance relation. The following terminology is used for classes A, B and interfaces I , J :

It is not allowed that A _h A. Cycles in the inheritance relation are detected at compile-time or at run-time when classes are dynamically loaded.

Constraint . The inheritance relation _h must be acyclic.

Syntax of a Java interface 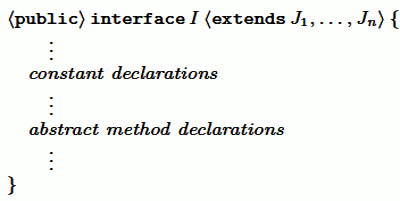 Lemma. The relation _h is a partial ordering:

The relation _h restricted to classes is a _nite tree. The root of the tree is the class Object. In mathematical terms, this can be expressed as follows.

Not much can be said with respect to interfaces except that interfaces have no superclasses but only superinterfaces.

De_nition . A package is a collection of classes and interfaces.
De_nition . A JavaC program is a set of packages.

A package name is a sequence of identi_ers separated by dots. The JLS proposes a unique way to name packages using Internet domains. For example:

De_nition . We say that a type B is accessible from A, if one of the following conditions is true:

Constraint. The inheritance relation must satisfy the following constraint:

Constraint. A _eld declaration must satisfy the following constraints:

Fields are classi_ed according to whether they are static or not:

We refer to the method as C=msig, where msig is the signature of the method, i.e., msig is the expression meth(B1; : : : ;Bn). We say that C=msig is m, if the modi_er m appears in the declaration of msig in C. The universe MSig consists of method signatures, i.e., method names together with the number of arguments and the types of the arguments.

Constraint. A method declaration must satisfy the following constraints:

Note, that void is not a real type. It is not allowed to declare a formal parameter or a local variable to be of type void.

Methods are classi_ed according to whether they are static or not:

This block is called the initializer of the class or interface. It is executed when the class is initialized.

Constraint. The keyword return is not allowed to appear in the block of a static initializer.

The expression exp can be an arbitrary non-constant expression. It is evaluated when the interface is initialized. Usually the identi_er _eld consists of upper case letters only.

Constraint. A constant declaration must satisfy the following constraints:

Although an interface does not contain static initialization blocks, we assume that all _eld initializers are combined in textual order as a sequence of assignments in one block which is called the initializer of the interface I .

If a class implements an interface, then all abstract methods of the interface must be implemented in the class. What this means will be explained below.

Constraint. An abstract method declaration must satisfy the following constraints:

De_nition. We say that x has default access in class C, if x is neither private nor public nor protected in C.

Some consequences of these de_nitions are:

The next de_nition is almost identical with the previous de_nition except that the clause for the modi_er protected has an additional condition [18, x6.6.2].

De_nition . An element C=x is accessible from A with respect to B means:

In the next de_nition we de_ne what it means that an element is visible in a class or interface A. In terms of the JLS this means that it is a member of A.

It is possible that two _elds with the same identi_er are visible in a class, since a class can implement everal interfaces.

As long as the constant MAX is not accessed in A by its simple name, no syntax error occurs.

The _eld I=MAX is visible in class B through its superclass A as well as directly, since B implements I.

The JLS uses the term `override' for instance methods only. We use it here for class methods, too.

De_nition . A method A=msig is said to directly override a method

C=msig, if there is a class or interface B such that

When a new method possibly overrides or hides a method with the same signature in a superclass or superinterface several conditions have to be satis_ed, for example, the return type has to be the same.

The last three constraints say that access may not decrease according to the following ordering:

The relation `overriding' is the reexive, transitive closure of `direct overriding'.

Constraint. If two methods B=msig and C=msig with the same signature are both visible in A, then the following constraints must be satis_ed:

The following constraint for abstract methods is not contained in the JLS.

Constraint. If C=msig is abstract, then it is public or protected.

The JLS allows abstract methods with default access. Such methods, however, are strange, because they cannot be implemented in a di_erent package.

De_nition . A class A implements a method msig, if there exists a class B such that

Constraint. If the abstract method C=msig is visible in class A and A does not implement msig, then A is abstract.

Example (; CD). Class A inherits from its direct superclass B a nonabstract method m(int). Therefore, class A implements method m(int).

The abstract method I=m(int) is visible in class A. Since A implements

m(int), class A is not abstract.

Example (; CD). If the method m(int) is declared private in class B, then it is no longer visible in class A.

Since class A does not implement method m(int), class A has to be declared abstract.

Example (; CD). If the method m(int) is declared with default access in class B, then Constraint below is violated, because m(int) is public

The compiler reports an error because the access modi_er of m(int) is made more restrictive.

For the rest of this chapter we assume that all _elds and methods of classes are static. Static _eld access expressions are replaced at compile-time by abstract expressions C:_eld, where _eld is a class _eld declared in class or interface I . There are two possibilities to access a static _eld:

These expressions are replaced at compile-time as follows:

The type of a static _eld access expressions C:_eld is the declared type of _eld in C (see Table below).

A method invocation expression can refer to a method in the current class or to a visible method of one of its superclasses. Since methods can be overloaded, during compile-time the most speci_c method is chosen which is applicable to the types of the arguments of the invocation. The type of the method invocation is then the return type of the chosen method. A method is more speci_c, if it is de_ned in a subclass or in the same class and if the argument types are subtypes. The return type of the method is ignored in the comparison. The relation `more speci_c' is a partial ordering. If a set of methods has a least element, then this element is unique.

There are two kinds of method invocations:

b) D=m is visible in C and accessible from A with respect to C.

Assume that app(_) contains a most speci_c element D=m, i.e.,

Assume that m is static in D. Then D=m is the method chosen by the compiler. Moreover, the type at position _ is the declared return type of m in D (see Table below).

Example (; CD). In the following program the method m is overloaded.

Example (; CD). It can happen that there exists no most speci_c method which is applicable to a method invocation.

In this case, the compiler reports that the reference to the method is ambiguous.

Note, that the literal 0 is of type int.

Example (; CD) 4.1.9. In the following example A=m(int) and B=m(long) are both applicable to the method invocation expression m(0):

Since B _h A and int _ long the two methods are not comparable and therefore there is no most speci_c method for m(0).

Example (; CD). The type of the expression in the return statement can be a subtype of the declared return type of the method:

In this example, the value of i is automatically converted to type long: the compiler replaces `return i' by `return (long)i' .

The extension of the vocabulary we describe in this section for JavaC re- ects that this machine comes with a class environment, including a class initialization mechanism, that it deals with di_erent methods which can be invoked and be returned from, and that with method return it introduces a new reason of abruption of normal program execution.

For the sake of simplicity, but without loss of generality, we assume that any class C has a class initializer C=<clinit>()|its body (whose function is to initialize the class _elds at the _rst active use of the class, see below) is a phrase static block, where block may be empty. Non constant class _eld initializations are syntactically reduced to assignments and are placed at the beginning of the class initializer. JavaC abstracts from initializations of constant _elds; the latter are final class _elds, whose values are compile-time constants [18, x15.27]. The value of constant _elds is precomputed (as part of the elaboration phase) and stored in the class and interface environment of the given program.

We assume also that there are only _eld access expressions of the kind C:_eld, where _eld is a static _eld declared in C. Other _eld access expressions are replaced during parsing and type checking. Moreover, method invocations are of the kind C:msig(exps), where msig is a method signature of a static method of class C. The method signature as well as the class C have been determined during type-checking.

JavaC programs are executed w.r.t. a static class environment which is set up during parsing and elaboration. The following static functions look up information in this environment, possibly traversing the inheritance hierarchy from bottom to top (from subtype to supertype).

To model the dynamic state of class _elds, we have to reserve storage for these variables. The dynamic function globals yields the value stored under a _eld speci_cation.

In JavaC we have to deal with di_erent methods which can be invoked and be returned from. We use the dynamic function meth to denote the currently executed method.

A method may call other methods. We use the usual stack technique to implement method calls. When a new method is invoked, the frame of the invoking method meth, consisting of meth, restbody; pos, and locals, is pushed onto the stack to be resumed after the invoked method has _nished. We denote by a dynamic function frames the sequence of currently still to be executed frames on the stack.

In JavaC there are two new reasons for abruption, namely Return and Return(Val ), occurring through the execution of return statements which by de_nition complete the body of a method abruptly and possibly return a result value to the invoker of the method. They will be used in the extension of the abruption handling rules of execJavaStmI in execJavaStmC .