For the rest of this chapter we assume that each method in each class of the current class environment has a bytecode type assignment.

What does it mean that the type assignment is sound? It means that the bytecode does not violate any checks when it runs on the defensive VM. One can show that at run-time the values of the operands and the values stored in local variables belong to the assigned types. If there is a verify type assigned to a local variable, then at run-time the local variable contains a value which belongs to that verify type. If the type is a primitive type, then the value is of exactly that type. If the type is a reference type, then the value is a pointer to an object or array which is compatible with that type. The same is true for the verify types assigned to the operand stack. Moreover, at run-time the 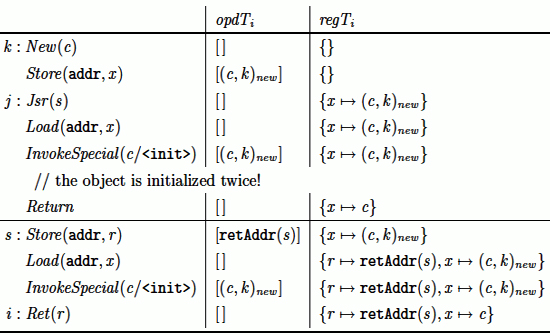 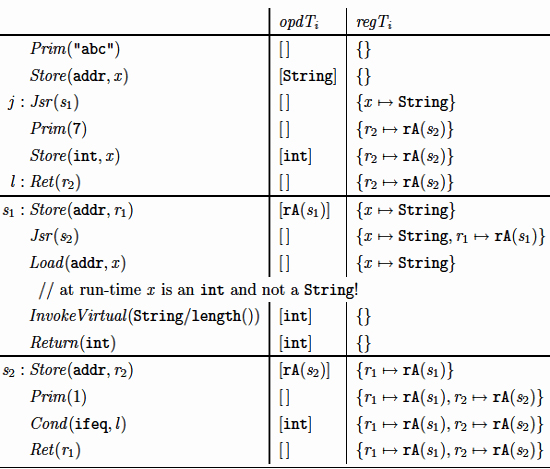 operand stack has exactly the same length as the list of verify types which are assigned to the operand stack.

De_nition(Typing rules). Let (regTi ; opdTi )i2D be a type assignment for a method _. Let reg be a local environment for _, v be a value and _ be a verify type. The

If s does not return, we obtain reg0 ` j +1: retAddr(s) by the second typing rule. Otherwise, by the third typing rule we have

Let x be a local variable which is de_ned in regTj+1 but does not belong to mod(s). Since reg0 is equal to reg outside of mod(s), it follows by (2) that reg

Hence, the three premises of the third typing rule are satis_ed and we can conclude that reg0 ` j + 1: retAddr(s). ut

Because of object initialization the types of references may change at runtime.

De_nition (Active reference). Let (pc_; reg_; opd_; meth_) be a frame and (regTi ; opdTi )i2D be the bytecode type assignment for meth_. We say that the frame contains an active reference r with assigned type _ , if one of the following two conditions is satis_ed:

We say that a reference r is active in the frame, if the frame contains r with some assigned type.

(pc_; reg_; opd_; meth_) is a frame on the stack of the JVM. Let _ be the method of the next frame (the called frame). Let vals be a sequence of possible return values compatible with the return type of _ with respect to a continuation of heap for the frame. If the return type is void, then vals is the empty sequence. Then (pc_+1; reg_; opd__vals; meth_) is called a continuation of the frame.

The value of register 0 is called the init object of the init sequence.

Let (regTi ; opdTi )i2D be the type assignment for meth_. Then the following invariants are satis_ed at run-time for the frame (pc_; reg_; opd_; meth_):

(init2) For each c and i , the frame contains at most one active reference r with assigned type (c; i)new .

(init3) If the frame contains an active reference r with assigned type (c; i)new , then r is not the init object of an init sequence of stack and r is not active in any other frame. The following global invariants are true at run-time:

(global) If the static _eld c=f of declared type A is used in the program, then type(globals(c=f )) v A.

(ref) If a reference r is used in the current state of the JVM, then r points to an existing object or array on the heap; classOf (r ) is a non-abstract class or an array type.

(initseq) There are not two di_erent init sequences on stack with the same init object.

Proof. We show _rst that the invariant (check) follows from the other invariants:

The type assignment ensures that check(meth_; pc_; regTpc_ ; opdTpc_ ) is true. Let regS = types(reg_) and opdS = types(opd_) be the type assignments associated to the local environment reg_ and the operand stack opd_. From (reg1), (reg2), (opd1) and (opd2) we can deduce that regS vreg regTpc_ and opdS vseq opdTpc_ . Since the structural constraints are monotonic, it follows that check(meth_; pc_; regS; opdS) is true as well.

The remaining invariants are proved by an induction on the run of the defensive VM. We show here the critical cases for subroutines, object initialization and the current frame.

The invariants (init1){(init3) and the global invariants can be moved from pc to s.

Case 4. code(pc) = New(c): The type assignment condition T6 for the successor frame (see Fig. below) ensures that { opdS _ [(c; pc)new ] vseq opdTpc+1, where opdS = [if t = (c; pc)new then unusable else t j t 2 opdTpc] { f(x ; t) 2 regTpc j t 6= (c; pc)new g vreg regTpc+1 Hence the only occurrence of the type (c; pc)new in the type frame at pc + 1 is the topmost position in opdTpc+1. Since there is only one occurrence of this type, invariant (init2) can be carried over from pc to pc + 1. The other invariants follow with similar arguments as in the previous cases.

The predicate initCompatible implies that one of the following statements is true:

The defensive VM deletes r from opd, pushes the current frame onto the stack (Fig. below) and sets initState(r) to Complete if c is class Object and to InInit otherwise. Hence type(r ) might change and we have to think about the possibility that the invariants for the continuations of other frames on the stack might be violated. Fortunately this is not the case because of invariants (init3) and (initseq).

We have to show the invariants for the new frame for the method c=<init>:

If _ = (c; k)new , then in the successor type frame of pc the type _ is replaced by c. Because initState(r ) = Complete in the continuation of the frame, we have type(r) = c and hence reg ` r : c. Note, that if the successor frame contains an active occurrence of r , then its assigned type in the current frame must be _ .

If _ = InInit, then in the successor type frame of pc the type _ is replaced by classNm(meth) (Fig. below). By the induction hypothesis (init1) it follows that classOf (r) v classNm(meth). Since type(r) = classOf (r ) in the continuation, we obtain reg ` r : type(r ).

The VM pops the topmost frame from the stack and makes it again the current frame. The returned value is appended to the operand stack and the program counter is incremented, if necessary. Hence we obtain exactly a continuation of the frame according to Def. Moreover, the current heap is a continuation of itself for the topmost frame according to Def. The induction hypothesis yields the invariants for the new state.

By the de_nition of the predicate validTypeSeq, the type sequences ts1 and ts2 do not start with a type hight. Hence, by invariant (opd2), the _rst words in the sequences ws1 and ws2 do not have the type tag hight. Therefore we see that the instruction Dupx cannot be used to construct an invalid 64-bit value be permuting single words on the operand stack and the invariant (opd64) remains true.

Here the function clean _lters out all ( ; )new and InInit types in regT and replaces them by unusable in opdT. The second condition can be implemented by changing T7 (f) in the de_nition of bytecode type assignment to the following condition: f') Neither (c ; )new nor InInit occur in mod(s) _ regTj+1 or in opdTj+1.

The above soundness proof, however, becomes much more complicated because invariants (init1){(init3) have to be included into the typing rules for return addresses and the function clean has to be removed. Moreover, the type of a return address depends then on the initialization status of the objects and a new coincidence lemma has to be proved.