Since local variables are not initialized with default values like class variables or instance _elds, a Java program that does not obey the rules of de_nite assignment could violate the invariants of Theorem below and would not be type safe. For example, a local pointer variable which is not initialized could point to an unde_ned location on the heap. Moreover, the rules of de_nite assignment ensure that the bytecode generated by a correct Java compiler is not rejected by the bytecode veri_er (Theorems below).

The rules of de_nite assignment have been changed in the second edition of the JLS [19, x16]. Boolean operators &, |, ^, == as well as assignments of boolean expressions to boolean variables are no longer treated in a special way. We take the rules of the second edition, because it simpli_es the task of writing a compiler that generates code that is accepted by the veri_er.

In order to precisely specify all the cases of de_nite assignment, static functions before, after , true, false and vars are computed at compile-time.

These functions assign sets of variables (identi_ers) to each position in the body of a method. The static functions have the following intended meanings (the functions true(_) and false(_) are de_ned for expressions of type boolean only):

The variable x is de_nitely assigned before the evaluation of the statement or expression at position _.

The variable x is de_nitely assigned after the evaluation of the expression at position _ when this expression evaluates to true.

The variable x is de_nitely assigned after the evaluation of the expression at position _ when this expression evaluates to false.

The position _ is in the scope of the local variable, formal parameter or catch parameter x . The functions satisfy the following inclusions:

For the other positions in the block the functions before, after , true and false can then be computed in a top-down manner. Instead of explaining exactly how the functions are computed, we just state the equations the functions have to satisfy.

Table below contains the equations for boolean expressions. It is assumed that type(_) = boolean in each row. There are no conditions for after in Table below, since by de_nition in all cases after (_) = true(_)false(_). Constant boolean expressions with value true (resp. false) are treated like the literal true (resp. false). If type(_) is boolean and _exp is not an instance of one of the expressions in Table below, then true(_) = after (_) and false(_) = after (_).

Table below contains the equations for non-boolean expressions. The most important condition is the _rst one for local variables. It requires for a local variable loc at a position _ that loc 2 before(_). Hence loc must be de_nitely assigned before it is used.

In addition to the constraints in Table below there are the following conditions for an expression _exp with direct subexpressions _1exp1; : : : ; _n expn:

Table below contains the constraints for statements. For a statement with label lab at position _ a set break(_; lab) is needed.

De_nition. A variable x belongs to break(_; lab) if the following two conditions are true:

If there are no substatements break lab inside _stm, then break(_; lab) = vars(_). 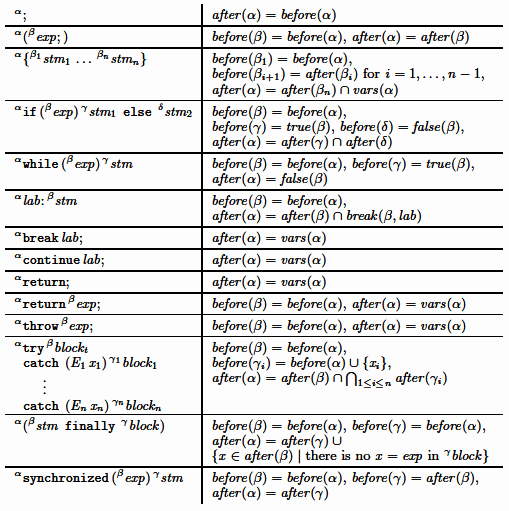 if the value is False, then the variables of the set after (pos) are de_ned in the local environment. The soundness of the rules of de_nite assignment is included in Theorem below.

Remark . The constraints in Table below di_er from the rules of de_nite assignment in [19, x16] in two points. First, the o_cial JLS de_nes for a try-finally statement _(_stm finally block):

Our de_nition in Table below is more restrictive. A variable x in after (_) belongs to after (_) only if there is no subphrase x = exp in block. Why do we restrict the set in this way? The reason is the program in Fig.below which is legal according to the JLS. If we compile the program following [23, x7.13], then the resulting bytecode is rejected by any bytecode veri_er we tried. If we take our constraints in Table below, then the program in Fig. below is no longer legal, since there is an assignment i = 3 in the finally block and the variable i is not regarded as de_nitely assigned after the try-finally statement. Hence, it cannot be used in the return statement. The e_ect of our restriction of the rules of de_nite assignment for the try-finally statement is that a variable which is de_nitely assigned after the try-finally statement but not after the finally block is|in the eyes of the bytecode veri_er|not modi_ed by the subroutine that implements the finally block.

The second di_erence between Table below and the rules of de_nite assignment in the o_cial JLS a_ects the labeled statement. The second clause of Def. below is not contained in the o_cial JLS. Hence, according to the JLS a variable is de_nitely assigned after a labeled statement, if it is de_nitely assigned after the statement and before every break that can exit the labeled statement. We restrict the set further. The reason for our restriction is that the program in Fig. below which is legal according to the JLS is rejected by all known bytecode veri_ers. Therefore we exclude the (rather exotic) program in Fig. below from the Java programming language. Both of our restrictions of the rules of de_nite assignments are chosen so that we can prove that our compiler in Part II generates veri_able code.