Here we explain the general problems of bytecode veri_cation, and show the particular problems and inconsistencies encountered in current bytecode veri_er implementations.

Why are subroutines problematic?

the subroutine S is called from three di_erent positions.

When S is called in the exception handler H, the variable y contains a pointer which is compatible with Throwable.

Polymorphism is one of the problems with subroutines. Another problem is that subroutines are not always left via a Ret(x ) instruction. Subroutines 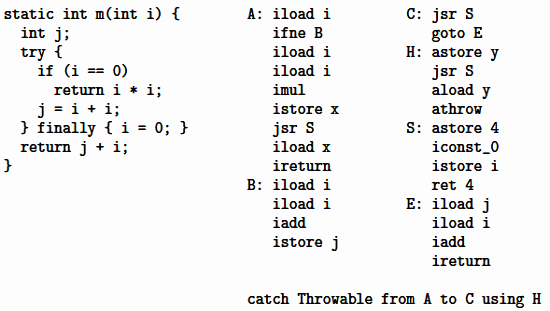 Breaking out of a subroutine to the top level (; CD) 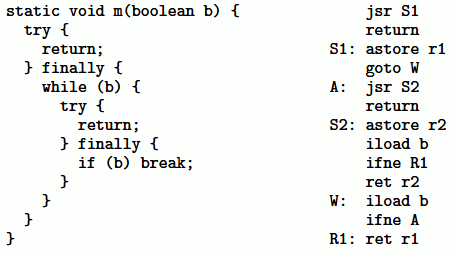 Moreover, a subroutine can be left via an exception handler. the subroutine S throws an exception of type E. This exception is then caught by the top-level handler H. In some cases it is not so clear which variables are modi_ed by a subroutine just by looking at the bytecode.

4 Jumping out of a subroutine with an exception handler (; CD)

In Fig. below we see in the Java program on the left-hand side that the variable b is not modi_ed in the finally block. In the bytecode on the right-hand side, however, the only way to reach the instruction `istore b' is via the subroutine S. Therefore, why should the variable b not be considered as modi_ed by the subroutine S? Sun's treatment of subroutines is inconsistent. For example, the JVM speci_cation requires that subroutines are not recursive. Sun's JDK 1.2 veri_er, however, accepts some recursive subroutines and rejects others.

Which variables are modi_ed by the subroutine? (; CD) 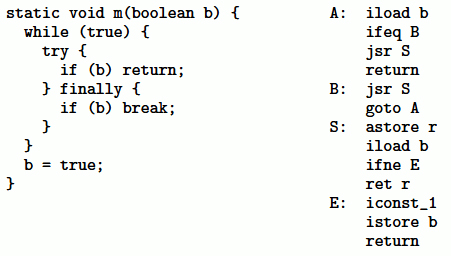 The bytecode on the left-hand side in Fig. below is rejected with the error `Recursive call to jsr entry'. The bytecode on the right-hand side in , however, is accepted by Sun's veri_er although it is as recursive as the rejected bytecode. It turns out that recursive subroutines are harmless, because return addresses can be stored in local variables only . They cannot be stored in an array. They cannot be loaded on the operand stack. The only operations which are allowed with return addresses are duplication or deletion. Therefore, our notion of bytecode type assignment is focused on polymorphism and allows trivial forms of recursion.

Fig. below shows an example of a valid Java program which is rejected by Sun's JDK 1.2 veri_er[14, bug no. 4268120]. This should not happen, since a veri_er should at least accept all bytecode that has been generated by a correct compiler from valid Java programs. 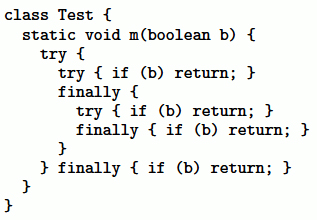 The program in Fig. below suggests that bytecode veri_cation is not possible at all, because it is rejected by any bytecode veri_er we have tried including JDK 1.2, JDK 1.3, Netscape 4.73-4.76, Microsoft VM for Java 5.0 and 5.5 and the Kimera Veri_er. The problem is that in the eyes of the veri_er the variable i is unusable at the end of the method at the return i instruction, whereas according to the JLS [19, x16.2.14] the variable i is de_nitely assigned after the try statement [14, bug no. 4381996]. Our rules of de_nite assignment for the try statementstronger and therefore the program is already rejected by our

A valid Java program rejected by all known veri_ers (; CD) 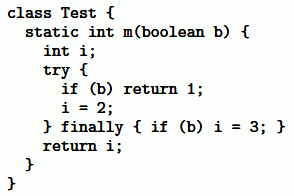 Another Java program rejected by all known veri_ers (; CD) 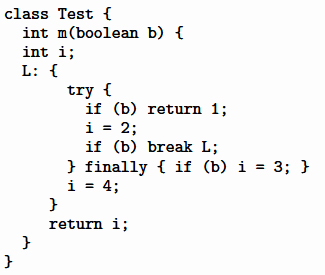 What is the type of variable x in the bytecode? (; CD)

compiler. Fig. above shows a similar problem for labeled statements.

Why sets of reference types?

One of the main tasks of bytecode veri_cation is to infer the types of local variables in method bodies. Only the types of the arguments of a method are known because they are contained in the method signature in the class _le.

The types of the other local variables are not known and must be inferred. contains an example with a local variable x of type Comparable for the type hierarchy). Since the class Integer as well as class String implement the interface Comparable, both arguments i and s of the method can be assigned to the variable x in the body.

In the corresponding bytecode, the type of x is not known.

When the veri_er reaches label B during its static analysis, the variable x can contain an Integer or a String. Since both types are reference types, the veri_er tries to merge the two types. The JVM speci_cation says in that `the merged type of two references is the _rst common superclass of the two types and that such a reference type always exists because the type Object is a superclass of all class and interface types.' In our example the _rst common superclass of Integer and String is the class Object Hence, the type assigned to variable x at label B is Object. The method invocation at the next instruction, however, requires an argument of type Comparable and so the veri_cation process fails.

Sun's JDK 1.2 veri_er does not reject the bytecode. Instead it inserts an additional run-time check for methods with arguments of interface type.

Hence, the compatibility of method arguments has to be checked at runtime in contradiction to the JVM speci_cation. A better solution is to allow sets of reference types in the bytecode veri_cation process. The type of variable x at label B above is then the set fInteger; Stringg. The meaning of this type is `either Integer or String'. At the method invocation

A piece of the Java type hierarchy 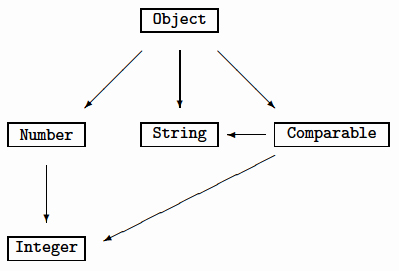 in the next instruction, the veri_er has just to check that each element of the set of reference types assigned to x is a subtype of Comparable. No additional run-time checks are needed.

Therefore we extend the universe of verify types to include also _nite sets of reference types. Remember that reference types are class types, interface types, array types and the special type Null which is used as the type of the null pointer.

The compatibility relation v has to be extended to such sets. Therefore we need the notion of an upper bound of a set of reference types.

For example, the upper bounds of the verify type fFloat; Integerg are the following types: Number; Object; Comparable:

Reason: The upper bounds of fInteger,Floatg are Number, Comparable, Object.

De_nition (Array type). A set _ of reference types is called an array type, if there exists a type A such that A[ ] is an upper bound of _ .

In the soundness and completeness proof for the bytecode veri_er the following properties of the extended compatibility relation are relevant:

Proof. The properties can be derived using the subtype relation for reference types in Def.