With respect to object creation and initialization the defensive JVM guarantees the following security properties:

Types. The above listed constraints require the introduction of new type descriptors. Since the new types are later also used in the bytecode veri_er, we call them

The primitive verify types are identical with the corresponding word types. The descriptor Null represents its only value null and is compatible with any reference types. Reference types are class types, interface types, array types and Null. Initialized instances of a class c are denoted simply by the name itself. The type descriptor (c; pc)new is the type of an un-initialized object created at code index pc. Partially initialized objects are of type InInit. The types (c; pc)new and InInit are not considered as reference types. The type descriptor unusable is added in order to have a topmost element in the set of verify types. Every value can be of type unusable. The compatibility relation is de_ned on verify types _, _ as follows:

De_nition . For verify types _ and _ the relation _ v _ is true, i_ one of the following conditions is true:

Since the types (c; pc)new and InInit are not reference types, they are compatible with themselves and unusable only.

We keep track of the initialization status of a reference in the dynamic function initState: initState:Ref ! InitState

A newly created un-initialized object of class c with reference r has initialization state New(pc), where pc is the code index of the instruction

New. If an initializer method declared in class c is called on r , the value of initState(r) is updated to InInit. When the initialization method of class Object is called, the partially initialized object r gets fully initialized and we update initState(r) to Complete (see Figure below).
References in the stack and in the registers are tagged with reference.

The heap contains the type information about references. Thus we have to extend our de_nition for type on words: 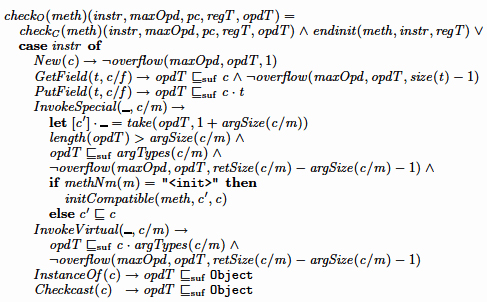 Rules. The execVMO rules are lifted for GetField, PutField, InvokeSpecial and InvokeVirtual onto the new state representation. Fig. above extends the check function of JVMC for these instructions. The conditions are similar to the ones for the class counterparts in the object-based language, additionally the type of the target reference must be an initialized subtype of the instruction parameter. The instructions InstanceOf and Checkcast both check whether the top of the stack denotes an initialized reference type. The instruction New(c) requires that there is still space on the type operand stack for the type (c; pc)new of a newly created un-initialized object of class c. When execVMO executes an instruction New(c) and creates a new reference r , then the initialization state of r has to be set in the following way: initState(r ) := New(pc) It remains to explain the conditions for calling and for returning from instance initialization methods. To initialize objects an <init> method has to be called. The target object must be un-initialized. The actual argument types must be compatible with the formal parameters. 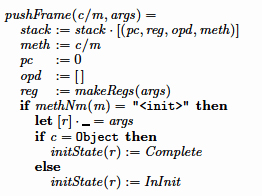 Whenever an initialization method is called, the dynamic function initState will be updated. This updating is performed in the switchVM , namely as follows. An object becomes initialized, when the initialization method of the root of the inheritance tree is called. Figure above re_nes the de_nition of pushing the type frame on the type stack. If an Object=<init> frame is pushed, initState is updated to Complete. If a c=<init> frame is pushed with c 6= Object, then the function initState is updated to InInit. Note that this update changes the initState of the reference|from New(pc), assigned to it when the reference has been created|only at the _rst constructor call.