The org.springframework.beans package adheres to the JavaBeans standard provided by Sun. A Java Bean is simply a class with a default no-argument constructor, which follows a naming convention where (by way of an example) a property named bingo Madness would have a setter method setBingoMadness(..) and a getter method getBingoMadness().

The way the Bean Wrapper works is partly indicated by its name: it wraps a bean to perform actions on that bean, like setting and retrieving properties.

Setting and getting basic and nested properties

The following code snippets show some examples of how to retrieve and manipulate some of the properties of instantiated Companies and Employees:

Spring uses the concept of PropertyEditors to effect the conversion between an Object and a String. If you think about it, it sometimes might be handy to be able to represent properties in a different way than the object itself.For example, a Date can be represented in a human readable way (as the String '2007-14-09'), while we're still able to convert the human readable form back to the original date (or even better: convert any date entered in a human readable form, back to Date objects).

A couple of examples where property editing is used in Spring:

Spring has a number of built-in PropertyEditors to make life easy.Each of those is listed below and they are all located in the org. spring fram ework. beans. propertyeditors package.Most, but not all (as indicated below),are registered by default by BeanWrapperImpl. Where the property editor is configurable in some fashion, you can of course still register your own variant to override the default one: 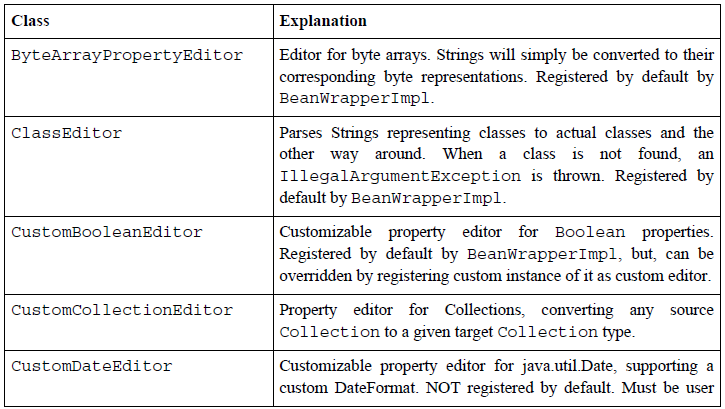 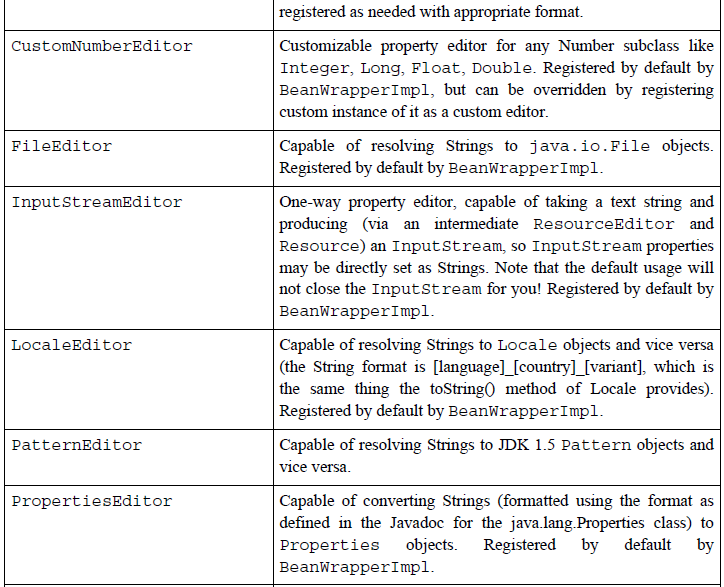 Spring uses the java.beans.PropertyEditorManager to set the search path for property editors that might be needed. The search path also includes sun.bean.editors, which includes PropertyEditor implementations for types such as Font, Color, and most of the primitive types.
Note also that the standard JavaBeans infrastructure will automatically discover PropertyEditor classes (without you having to register them explicitly) if they are in the same package as the class they handle, and have the same name as that class, with 'Editor' appended; for example, one could have the following class and package structure, which would be sufficient for the FooEditor class to be recognized and used as the PropertyEditor for Foo-typed properties.

Note that you can also use the standard BeanInfo JavaBeans mechanism here as well. Find below an example of using the BeanInfo mechanism for explicitly registering one or more PropertyEditor instances with the properties of an associated class.

Here is the Java source code for the referenced FooBeanInfo class.This would associate a CustomNumberEditor with the age property of the Foo class.

If there is a need to register other custom PropertyEditors, there are several mechanisms available.The most manual approach, which is not normally convenient or recommended, is to simply use the register Custom Editor() method of the Configur able Bean Factory interface,assuming you have a BeanFactory reference.Another, slightly more convenient, mechanism is to use a special bean factory post-processor called CustomEditorConfigurer.Although bean factory post-processors can be used with BeanFactory implementations, the CustomEditorConfigurer has a nested property setup, so it is strongly recommended that it is used with the ApplicationContext, where it may be deployed in similar fashion to any other bean, and automatically detected and applied.

Note that all bean factories and application contexts automatically use a number of built-in property editors, through their use of something called a BeanWrapper to handle property conversions.

Additionally, ApplicationContexts also override or add an additional number of editors to handle resource lookups in a manner appropriate to the specific application context type.

Consider a user class ExoticType, and another class DependsOnExoticType which needs ExoticType set as a property:

When things are properly set up, we want to be able to assign the type property as a string, which a PropertyEditor will behind the scenes convert into an actual ExoticType instance:

The PropertyEditor implementation could look similar to this:

Finally, we use CustomEditorConfigurer to register the new PropertyEditor with the ApplicationContext, which will then be able to use it as needed:

Another mechanism for registering property editors with the Spring container is to create and use a PropertyEditorRegistrar.This interface is particularly useful when you need to use the same set of property editors in several different situations: write a corresponding registrar and reuse that in each case.Property Editor Registrars work in conjunction with an interface called Property Editor Registry, an interface that is implemented by the Spring BeanWrapper (and DataBinder).

Using a PropertyEditorRegistrar is perhaps best illustrated with an example. First off, you need to create your own Property Editor Registrar implementation:

Next we configure a CustomEditorConfigurer and inject an instance of our CustomProperty EditorRegistrar into it:

find below an example of using a Property Editor Registrar in the implementation of an initBinder(..) method:

This style of Property Editor registration can lead to concise code (the implementation of initBinder(..) is just one line long!), and allows common PropertyEditor registration code to be encapsulated in a class and then shared amongst as many Controllers as needed. 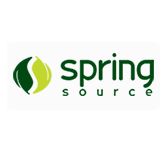