What are Crosstab reports in Jasper Reports?

The reports that contain the tables which enables to arrange the data in a tabular form across rows and columns is termed as Crosstab or cross-tabulation. The crosstab report can be inserted within the main report using the crosstab object. The crosstabs supports to any level of data like nominal, ordinal, interval, or ratio and displays the summarized data which is present in the variables of the report. The aggregate data like sum, average etc is displayed by the Variables.

What are the Properties of Crosstabs?

The properties or attributes of the crosstab elements are as follows:

What are the Sub Elements of a Crosstab?

The following are the sub elements of a cross tab:

columnTotalGroup − indicates the group to use to calculate the column total.

height − defines the height of the cell.

rowTotalGroup − indicates the group to use to calculate the row total.

width − defines the width of the cell.

How Data Grouping is done in Jasper Reports Crosstab?

The data is grouped and aggregated in the crosstab by iterating with the associated dataset records. The data is aggregated by grouping them. The rows and columns of the crosstab are based on the group items which are called as buckets. A bucket contains the following attributes:

The crosstab row and column group depend on buckets.

How the Total Variables are built-in in Crosstabs?

The variables enable to list out the values of the measures and the aggregate of different levels which correspond to the cell and which can be accessed by the variables that are specifically named:

The crosstab is illustrated by the following example by writing a new report template, jasper_report_template.jrxml. The crosstab is added to the summary section and is saved to the directory C:\tools\jasperreports-5.0.1\test and the contents of the file are as follows:

The above code provides the following details:

There is no change in the Java codes for report filling. The contents of the file C:\tools\jasperreports-5.0.1\test\src\com\wisdomjobs\JasperReportFill.java are as follows:

The contents of the POJO file C:\tools\jasperreports-5.0.1\test\src\com\wisdomjobs\DataBean.java are as follows −

The contents of the file C:\tools\jasperreports-5.0.1\test\src\com\wisdomjobs\DataBeanList.java are as follows −

How the report is generated using Jasper Reports Crosstabs?

The above files are compiled and executed by using the ANT build process and the content of the file biuild.xml are saved under C:\tools\jasperreports-5.0.1\test

The import file - baseBuild.xml is selected and placed in the same directory as build.xml.

The command line window is opened and visit the directory where the build.xml is placed and execute the command ant -Dmain-class=com.wisdomjobs.JasperReportFill

On compilation of the above code, the JasperViewer window pops up as shown below:

It is observed that the country and the name are tabulated. 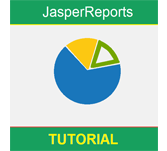