From the time your application is launched by the user, to the time it exits, the UIKit framework manages the majority of the application’s key infrastructure. An iPhone application receives events continuously from the system and must respond to those events. Receiving the events is the job of the UIApplication object but responding to the events is the responsibility of your custom code. In order to understand where you need to respond to events, though, it helps to understand a little about the overall life cycle and event cycles of an iPhone application. The following sections describe these cycles and also provide a summary of some of the key design patterns used throughout the development of iPhone applications. 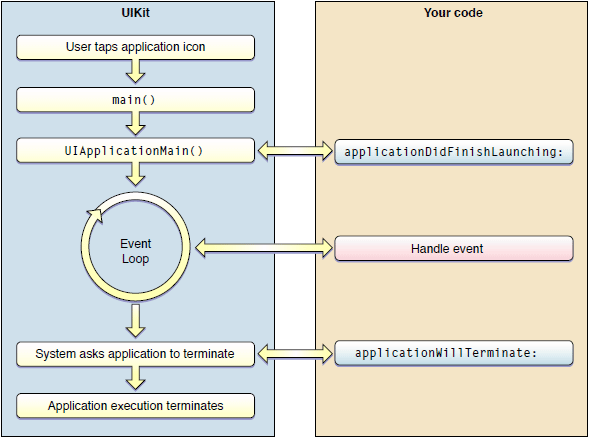 The main function of an iPhone application

Monitoring the high-level behavior of your application is the responsibility of the application delegate object, which is a custom object that you provide. Delegation is a mechanism used to avoid subclassing complex UIKit objects, such as the default UI Application object.Instead of subclassing and overriding methods, you use the complex object unmodified and put your custom code inside the delegate object. As interesting events occur, the complex object sends messages to your delegate object. You can use these “hooks” to execute your custom code and implement the behavior you need.

Another task that occurs at initialization time is the loading of the application’s main nib file. If the application’s information property list (Info.plist) file contains the NS Main Nib File key, the UI Application object loads the nib file specified by that key as part of its initialization process. The main nib file is the only nib file that is loaded for you automatically; however, you can load additional nib files later as needed.

Nib files are disk-based resource files that store a snapshot of one or more objects. The main nib file of an iPhone application typically contains a window object, the application delegate object, and perhaps one or more other key objects for managing the window. Loading a nib file reconstitutes the objects in the nib file, converting each object from its on-disk representation to an actual in-memory version that can be manipulated by your application. Objects loaded from nib files are no different than the objects you create programmatically.

For user interfaces, however, it is often more convenient to create the objects associated with your user interface graphically (using the Interface Builder application) and store them in nib files rather than create them programmatically.

After the UI Application Main function initializes the application, it starts the infrastructure needed to manage the application’s event and drawing cycle, which is depicted in Figure. As the user interacts with a device, iPhone OS detects touch events and places them in the application’s event queue. The event-handling infrastructure of the UIApplication object takes each event off the top of this queue and delivers it to the object that best suited to handle it. For example, a touch event occurring in a button would be delivered to the corresponding button object. Events can also be delivered to controller objects and other objects indirectly responsible for handling touch events in the application.

The event and drawing cycle 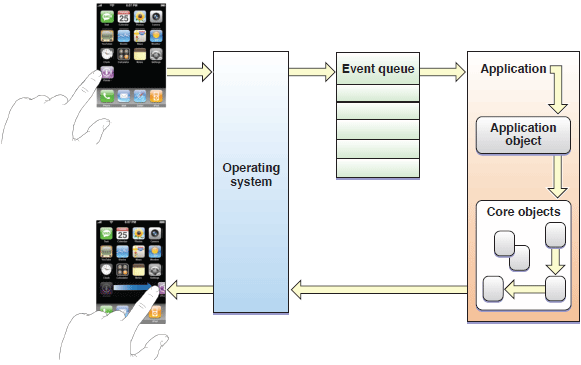 In the iPhone OS Multi-Touch event model, touch data is encapsulated in a single event object (UIEvent). To track individual touches, the event object contains touch objects (UITouch), one for each finger that is touching the screen. As the user places fingers on the screen, moves them around, and finally removes them from the screen, the system reports the changes for each finger in the corresponding touch object.

The UIApplication object configures the main run loop with an input source that processes touch events by dispatching them to the appropriate responder objects. A responder object is an object that inherits from the UIResponder class and that implements one or more methods for processing the different phases of a touch event. Responder objects in an application include instances of UIApplication, UIWindow, UIView, and all UIView subclasses. The application typically dispatches events to the UIWindow object representing the application’s main window. The window object, in turn, forwards the event to its first responder, which is typically the view object (UIView) on which the touch took place.

The responder object that handles the event tends to set in motion a series of programmatic actions that result in the application redrawing all or a portion of its user interface (as well as other possible outcomes, such as the playing of a sound). For example, a control object (that is, a subclass of UIControl) handles an event by sending an action message to another object, typically the controller that manages the current set of active views. While processing the action message, the controller might change the user interface or adjust the position of views in ways that require some of those views to redraw themselves. When this happens, the view and graphics infrastructure takes over and processes the required redraw events in the most efficient manner possible. 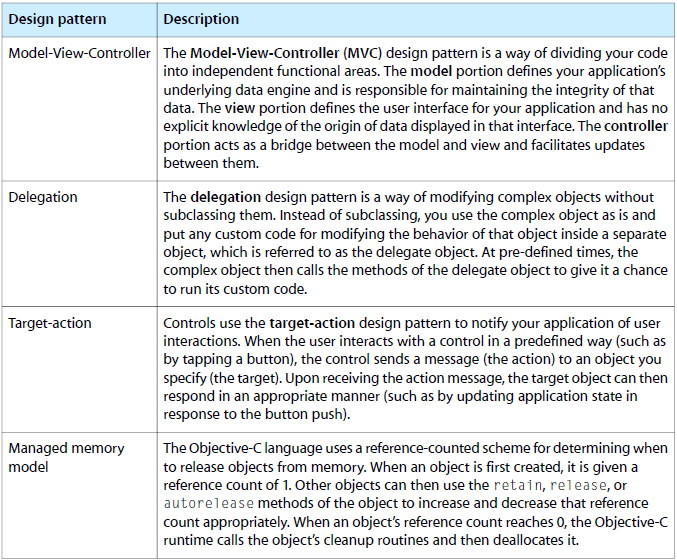 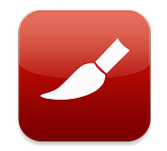