SQL can be classified based on its functionality. SQL can be used to control, define and manipulate data. The classification can be done as follows:

A data control language(DCL) is a syntax similar to a computer programming language used to control access to data stored in a database. In particular, it is a component of Structured Query Language(SQL). Examples of DCL commands include:

The operations for which privileges may be granted to or revoked from a user or role may include CONNECT,SELECT,INSERTUPDATE,DELETE,EXECUTE, and USAGE. In the Oracle database, executing a DCL command issues an implicitcommit. In Postgre SQL, executing DCL is transactional, and can be rolled back.

A more detailed discussion on the DCL commands will be taken up in the later chapters where we discuss the security aspects.

Data Definition language is used to create, alter and delete database objects. The commands used are CREATE, ALTER and DROP. The principal logical Data definition statements are listed below:

A table in a relational system consists of a row of column headings, together with zero or more rows of data values. The CREATE TABLE creates a base table. A base table is an autonomous named table. By autonomous, we mean that the table exists by its own right, unlike a view, which does not exist in its own right but is derived from one ore more base tables. The CREATE TABLE statement has two formats. Format 1 is the general form and is as follows: 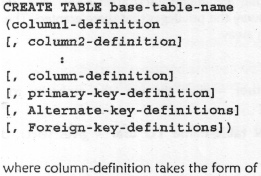 This statement will create an empty base table named OBJECT. The table will have four columns and the primary key will be OBJECTJD.

The second format of the CREATE TABLE statement is as follows and this format allows the user to create a base table that is having the same structure as some existing table.

For example the statement "CREATE TABLE OBJ LIKE OBJECT;" will create a table called OBJ with the same structure as OBJECT. But the only thing that is to be noted here is that the primary, alternate and foreign key definitions is not inherited.

An example of the statement is given below:

New columns can be added, primary and foreign key specifications can be added or removed using this command. But alternate key specifications cannot be changed using the ALTER TABLE statement. The important thing to remember here is that the ALTER TABLE statement does not support any kind of change to the width or data type of an existing column neither does it support the deletion of an existing column.

An existing base table can be deleted at any time by using the DROP TABLE statement. The syntax of this statement is DROP TABLE base-table-name The specified base table is removed form the system. All indexes and views defined for the table are also automatically dropped.

A data manipulation language(DML) is a family of syntax elements similar to a computer programming language used for inserting, deleting and updating data in a database. Performing read-only queries of data is sometimes also considered a component of DML.

A popular data manipulation language is that of Structured Query Language(SQL), which is used to retrieve and manipulate datai n a relational database.Other forms of DML are those used by IMS/DLI,CODASYL databases, such as IDMS and others.

Data manipulation language comprises the SQL data change statements which modify stored data but not the schema or database objects.Manipulation of persistent database objects, e.g., tables or stored procedures,via the SQL schema statements rather than the data stored within them is considered to be part of a separate data definition language. In SQL these two categories are similar in their detailed syntax, data types, expressions etc., but distinct in their overall function.

You can further narrow down the query's result set to specific rows which satisfies certain conditions by using the WHERE clause and the condition or conditions that limits the rows in the result set as follows:

The SELECT command also has options for formatting the output of the results set. For example, the ORDER BY clause allows you to order rows in a query's return set:

To insert new rows into a table we use the INSERT command. For example:

This SQL statement is used to update or modify an existing row(s) in a table:

This SQL statement updates every customer's fax number to NULL. You can update specific rows in the target table by specifying the WHERE clause:

It is possible to include a subquery in the expression of the SET clause of the UPDATE statement:

The above statement deletes all rows from the customer table. If you want to delete specific rows from a table then you should specify the WHERE clause as in the following example which will delete the order with id=100:

That was a quick look into the Data Control, Definition and Manipulation Language features of the SQL. A more detailed discussion and the issues specific to DB2 is done later in this chapter.