But by mainframe standards, it is safe to call this a small configuration. For direct access storage, the configuration in the following figure uses three strings of 3390 model 1 DASDs, each containing eight drives. As a result, the system has a total of 24 disk drives. Since each 3390 model 1 has a capacity of 946MB, the total DASD capacity of this system is about 22 billion bytes. As we have seen 3390s are fixed-media DASDs; their disk packs cannot be removed. To provide a way to create backup copies of data on the 3390s, a string of four 3490 tape drives is used.

The four operator consoles let system operators control the operation of the system. Some of the consoles might be dedicated to specific tasks, such as managing the tape drives or controlling the two highspeed impact printers that are used as the primary printing devices for the system.

A local 3270 system, directly attached to the 4381 processor, provides 12 terminals and one printer; its terminals are used by the programming staff, who are based in the same building that houses the computer. The 3725 communications controller allows remote 3270 systems to access the system via telephone lines. 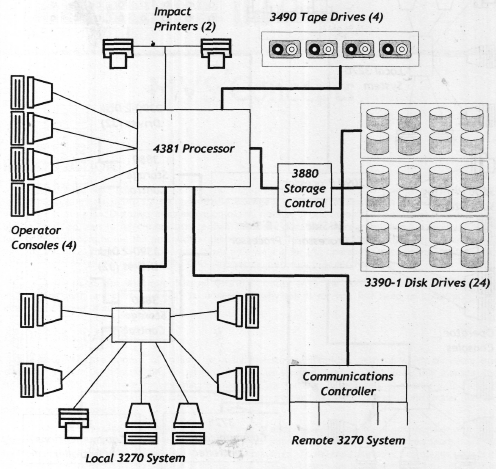 The above following figure shows a medium-sized mainframe configuration, based around a 3090 processor that contains 256MB of main memory. The processor is partitioned into two independent systems, known as the A-side and the B-side. Two 3990 storage controls are used to attach four strings of 3390-2 disk drives. The total DASD capacity of this configuration is about 121 billion bytes. As in the 4381 configuration, the tape drives—in this case, 16 of them—are used mostly to create backup copies of DASD data. 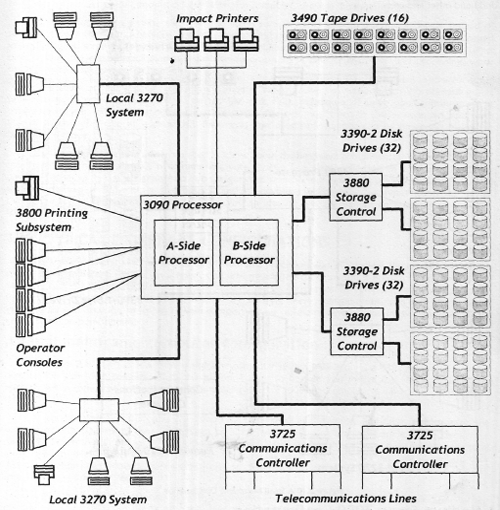 The 3090 system in the above figure includes two local 3270 systems, eight operator consoles, three 3211 line printers, and a 3800 printing subsystem. In addition, two communications controllers are attached to the processor to support remote users. If the communications controllers are fully equipped, this system could conceivably support hundreds or even thousands of terminal users.