PART I - USING DB2 IN AN APPLICATION PROGRAM - IBM Mainframe

DB2 application development is the construction of application programs with SQL statements embedded in it. The programming languages or host languages as they are known, currently supported are APL2, Assembler H. IBM BASIC, OS/VS COBOL, VS COBOL II, C/370, FORTRAN, LISP and, PL/I. DB2 application programs can be run in the execution environments like MVS batch using Call Attachment Facility (CAF), TSO batch, DL/I batch, CICS, IMS/DC, IMS/BMP, TSO Interactive, etc. This book uses COBOL as the principal host language, because it is most widely used. But of course the ideas are fairly general and translate into other host languages with only comparatively minor differences.

Embedding SQL statements in the application program make the programming easy and the programmer is freed from the tedious jobs of opening, closing of files, coding the file descriptions etc.

The main differences between the conventional programming using flat file programming and DB2 programming is summarized in the following table:

All embedded SQL statements must be enclosed between delimiters. The delimiters for COBOL are 'EXEC SQL' and 'END-EXEC. These delimiters should be coded for each and every SQL statement and must start in column 12.

The following are some practices/guidelines for embedded SQLs, which will make you DB2 application program, perform better and will improve the maintainability.

The SQLCA contains fields, which are used for communicating information describing the success or failure of the execution of an embedded SQL. The most important among them is the SQLCODE, which contains the return code passed by DB2 to the application program. The return code provides information about the execution of the last SQL statement. A value of zero indicates successful execution, a positive value indicates successful execution but with an exception and a negative value indicates failure during execution. By knowing the value of the SQL code the problem of failure can be pinpointed and this is a very useful tool in debugging.

But it is always better to avoid the use of WHENEVER statement. It is always safe to code specific SQLCODE checks after each SQL statement and process accordingly.

When the same variable is referenced outside the SQL statement in the COBOL program, do not use the colon, because it will result in compilation errors.

DCLGEN, a DB2 utility, produces host variables named as the same as the columns. Use of DCLGEN reduces the coding effort. But when using tables with the same column names, edit the DCLGEN output tp make the host variable names unique. This confusion can be avoided if you prefix the column names with an abbreviated table identifier, while table definition.

This when used in the SQL statements should be prefixed with a colon as follows:

This populates the host variables for all columns defined under the DCLEMPLOYEE group-level data area.

Before you select or insert a column that can be set to null, it must have an indicator variable, called null indicator, for it. You can also use null indicator variables with UPDATE statement to set columns to null. A third and very important use of null indicators (which we have discussed earlier) is when any column is retrieved using the column functions AVG, SUM, MAX and MIN the only exception being COUNT which does not returns the value 0 if no rows meeting the criteria are found.

You can use null indicator variables with host variables in the following situations:

Use a null indicator variable when referencing a nullable column. Failure to do so will result in a -305 SQLCODE. If you fail to check the null status of the column being retrieved, your program might continue to execute, but with unpredictable results.

DB2 uses cursors to navigate through a set of rows returned by an embedded SQL SELECT statement. A cursor can be compared to a pointer. The programmer declares a cursor and defines the SQL statement for the cursor. After that you can use the cursor like a sequential file. The cursor is opened, rows are fetched from the cursor, one row at a time and at the end of processing the cursor is closed. The four operations that must be performed for the successful working of the cursor are: 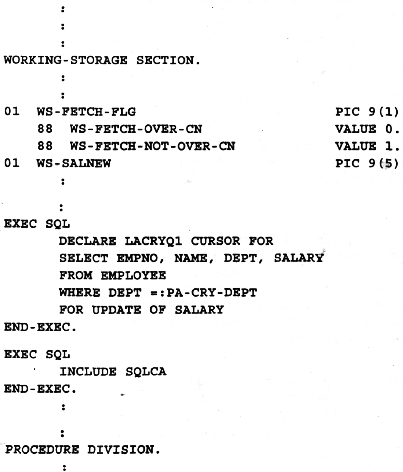 When coding embedded SQLs using cursors the following guidelines will improve the performance and maintainability of the program: 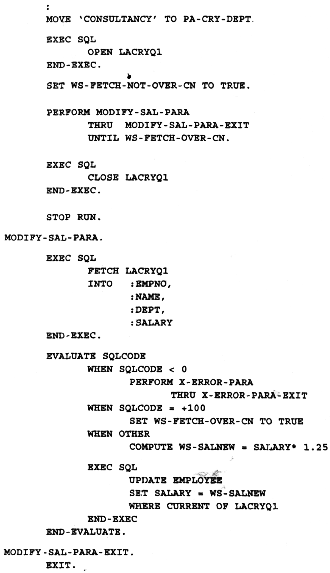 WITH HOLD prevents subsequent COMMITs from destroying the intermediate results table from the SELECT statement, thereby saving positioning within the cursor. The WITH HOLD option is not available for cursors coded in CICS programs.