Computer multiprogramming is the allocation of a computer system and its resources to more than one concurrent application, job or user ("program" in this nomenclature).

Initially, this technology was sought in order to optimize use of a computer system, since time and processing resources were often wasted when a single job waited for human interaction was developed as a feature of operating systems in the late 1950s and came into common use in mainframe computing in the mid- to late 1960s. This followed the development of hardware systems that possessed the requisite circuit logic and instruction sets to facilitate the transfer of control between the operating system and one or more independent applications, users or job streams.

The use of multiprogramming was enhanced by the arrival of virtual memory and virtual machine technology, which enabled individual programs to make use of memory and operating system resources as if other concurrently running programs were, for all practical purposes, non-existent and invisible to them.

In this context, the root word "program" does not necessarily refer to a compiled application, rather, any set of commands submitted for execution by a user or operator. Such "program" could include a script or job control stream and any included calls to macro-instructions, system utilities or application program modules. An entire, interactive, logged-in user session can be thought of as a "program" in this sense.

A program generally comprises numerous tasks, a task being a relatively small group of processor instructions which together achieve a definable logical step in the completion of a job or the execution of a continuous-running application program. A task frequently ends with some request requiring the moving of data, a convenient opportunity to allow another program to have system resources, particularly CPU time.

In multiprogramming, concurrent running (sharing of the processor) is achieved when the operating system identifies opportunities to interrupt the handling of one program between tasks (e.g., when it is waiting for input/output) and to transfer process control to another program (application, job or user). To a great extent, the ability of a system to share its resources equitably—or according to certain priorities—is dependent upon the design of the programs being handled and how frequently they may be interrupted.

Multi-tasking eliminates that dependency and expands upon multiprogramming by enabling the operating system supervisor to interrupt programs in the middle of tasks and to transfer processor control so rapidly that each program is now assured a portion of each processing second, making the interruptions imperceptible to most human-interactive applications. 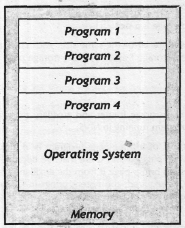 Moving pages between real storage frames and auxiliary storage slots is called paging. The following figure shows how paging is done for a program running in MVS.

Thus, the entire program reside in virtual storage and the system copies pages of the program between real storage frames and auxiliary storage slots to ensure that the pages that are currently active are in real storage as they are required. Note that neither the frames nor the slots allocated to a program need be contiguous; thus a page can occupy several different frames and several different slots during the execution of a program. So if page A in the above example were to become active again MVS would move it to any available frame. 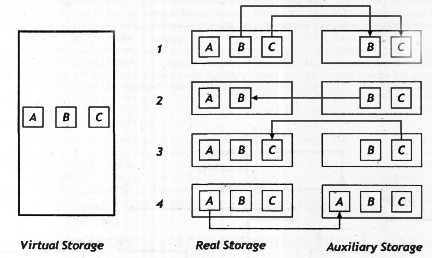 When a program refers to a storage location that is not in real storage, a page fault occurs. When that happens, MVS locates the page that contains the needed data on DASD and transfers it into real storage. That operation is called a page-in. In some cases, the new page can overlay data in a real storage page frame. In other cases, data in a page frame has to be moved to a page data set to make room for the new page. That is called a page-out. Either way, the process of bringing a new page into real storage is called paging.

Most installations do not need that much expanded storage for normal paging operations, but as you will see in a moment, large amounts of expanded storage can provide additional benefits when MVS/ESA is used.

Concept of Swapping under MVS 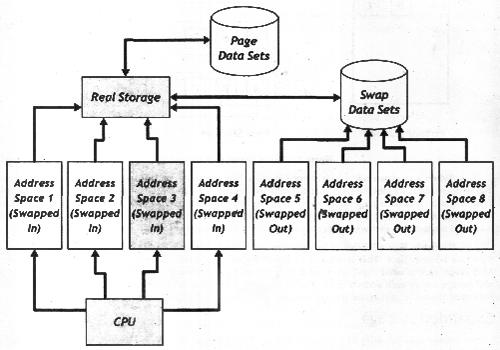 Depending on the amount of real storage a system has and the types of jobs it is processing, MVS can efficiently multiprogram only a certain number of jobs at once. So, using a process called swapping, MVS periodically transfers entire address spaces in and out of virtual storage so they are temporarily unavailable for processing. When an address space is swapped out, its critical pages—the ones that contain the tables that keep track of the location of each virtual storage page for the address space—are written to a special data set called a swap data set. Later, when the system can accommodate the job again, the address space is swapped in so it can be processed again.