As we discussed before, defining a VSAM cluster merely allocates a data set. It still has to be loaded with records. This can be done in one of two ways.

As mentioned before, REPRO is an lEBGENER-like utility to copy records from an input data set to an output data set. We will examine this option in detail. In order to use the REPRO command, we need to know the following:

Let us consider the layout of the input data set to be the same as we used before.

The name of the input data set, let us say, is CUSTOMER.TEST.INPUT. The process of loading a data set involves, opening the input file, reading the records one by one, and writing it onto the output file. All these functions are accomplished by the one command REPRO. We will use the input file CUSTOMER.TEST.INPUT to create a KSDS, ESDS and an RRDS by the following names:

Storing data in a VSAM KSDS file, is known as Loading. Initially, to begin with the KSDS File is empty, it doesn’t contain any records. Based on, the Control Interval Size, that you’d have specified, while creating the KSDS File, the MVS Operating System books and reserves empty Control Intervals of that size in the KSDS Cluster. These are yet to be filled up,populated with data-records.

To actually load data-records into a VSAM KSDS file, you use IBM Supplied Utility IDCAMS. Instruct the IDCAMs utility, what’s the task you would like to perform by providing an appropriate control statement(as instream data). The IDCAMS utility picks up the Control Commands, and acts accordingly. So, the control command used to Load Data records in VSAM KSDS File is REPRO Command. In this tutorial, effectively, you are going to REPRO in the data records from a plain Sequential file into a KSDS Dataset.

The following JCL can be used to load records into a KSDS. 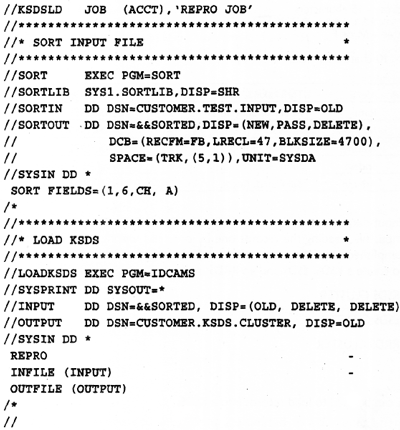 Note that the DD statements for the input and output data sets are not present in this JCL. Also, instead of the INFILE and OUTFILE parameters in the REPRO statement, we have used INDATASET and OUTDATASET. In this format, AMS performs a dynamic allocation of the data sets. The important thing to remember is that dynamic allocation can only be done for data sets that are cataloged. It is also possible to use mixed format within the same REPO statement. For example:

When an ESDS is being loaded, the associated file must be opened for SEQUENTIAL OUTPUT. The records are retained in the order in which they are presented.

You can use the KEYTO option to obtain the relative byte address of each record as it is written. You can subsequently use these keys to achieve keyed access to the data set.

A sample JCL for loading into an ESDS is given below:

Options of the REPRO Command

This optional parameter is used to merge records into a VSAM file. It can only be used when the target records already have records and is either a KSDS or RRDS. In other words, it cannot be used if the target data set is an ESDS or LDS.

source RRDS will have relative record numbers, which will identify where the source records should be placed in the target data set. REUSE

These options are used to selectively copy records from the source data set to the target data set as opposed to fully copying. An example is given below:

If the source data set is a KSDS from which only records that fall within a certain range need be copied, we can use this option. For example

The PRINT command of AMS is used to print VSAM and non-VSAM data sets. It is similar in syntax to a REPRO command and is different from REPRO in that PRINT dumps the contents of the input file to an output printer device as opposed to an output file.

If hex format is specified, then each character in the data set are printed as 2 hexadecimal digits. A maximum of 120 hex digits is printed on each line or the equivalent of 60 characters.

The dump format is a combination of character and hex formats. Each character is printed as both a character and as the corresponding hex representation. Each print line contains 64 hex digits and the equivalent 32 hex characters. The format of the print command is:

Where INPUT is the DDNAME of the file to be printed. To print in hex format, the keyword HEX must added to the PRINT functional command.

To print in character format the keyword CHAR must be coded and DUMP keyword corresponds to the dump format in printing. A sample JCL is given below:

As previously mentioned, the PRINT command is very similar to the REPRO command in its syntax and usage. Just as we can selectively copy records using REPRO, we can selectively print records with PRINT. The options used for this are the same as that for REPRO. These options are given below:

These options are used to selectively print records from a data set as opposed to printing the full data set. An example is given below:

If the source data set is a KSDS from which only records that fall within a certain range need be printed, we can use this option. For example

These options are similar to FROMKEY and TOKEY in their functioning. The main difference is that this option can be used to print from ah ESDS all records that lie between these two relative byte addresses.

This option would print the selected records, which lie between the two given relative record numbers (RRN's).