IEHPROGM builds and maintains system control data. It is also used for renaming and scratching (deleting) a data set.

Some of the tasks that IEHPROGM can perform include the following:

The JCL used to execute this utility is as follows:

For uncataloging a data set, there is no need to specify the location of the data set to be uncataloged, that is SYSUT2 statement is not required and the following have to be coded-: 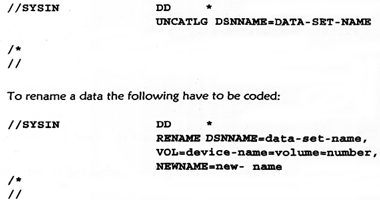 For creating index for GDG, the BLDG INDEX command is used. It has 3 formats: 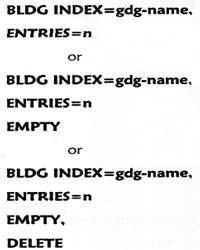 Where gdg-name is the name of the GDG, 'n' is the maximum number of generations that can exist for that GDG, EMPTY is an optional keyword that specifies the all entries are not to be removed form the index if the limit of number of generations is reached. The DELETE keyword is also optional, and is used to specify that the GDG data sets are to be physically removed form the volume that they exist on if their entries are deleted form the index. There is no need to specify the SYSUT2 statement and the following have to be coded:

For deleting the index for GDG, the DLTX INDEX command is used. There is no need to specify the SYSUT2 statement and the following have to be coded: