Regardless of size, all computers consist of two basic types of components—processors and input/output (I/O) devices. The following figure illustrates these components, The processor consists of three parts— the central processing unit, or CPU executes instructions; main storage stores instructions and data processed by the CPU; and device controllers let the CPU and main storage connect to I/O devices. input/output devices fall into two classes—those that provide input and output to the system, such as terminals and printers, and those that provide secondary storage, such as tape and disk drives.

Hardware configuration depends on three factors: how much processing power is required, how much delivery throughput is needed, and where your servers are located. If you have a small notification application that is completely located behind a firewall, you might host Notification Services, databases, and subscription management on one server. However most medium to large applications benefit from multiple servers. Very large applications can be scaled out across several servers, and applications that require very high availability can use failover clustering.

The Basic Components of a Modem Computer System 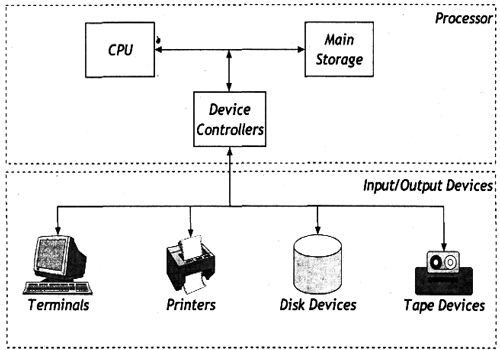 A microcomputer is a computer with a microprocessor as its central processing unit (CPU). It includes a microprocessor, memory, and input/output (I/O) facilities. Such computers are physically small compared to mainframes and minicomputers, although present-day mainframes such as the IBM System machines use one or more custom microprocessors as their CPUs. Many microcomputers (when equipped with a keyboard and screen for input and output) are also personal computers (in the generic sense)

The category is termed "micro" because the fundamental component that allowed the categories development was the CPU created on a single chip (so this technology was affordable in comparison to the mini/mainframe) created with the introduction of 'microprocessors.' The lower costs in the development and production of the CPU and various components of the microcomputer allowed microcomputers to become a broad market general-purpose computer.

Monitors, keyboards and other devices for input and output may be integrated or separate. Computer memory in the form of RAM, and at least one other less volatile, memory storage device are usually combined with the CPU on a system bus in one unit. Other devices that make up a complete microcomputer system include batteries, a power supply unit, a keyboard and various input/output devices used to convey information to and from a human operator (printers, monitors, human interface devices). Microcomputers are designed to serve only one user at a time, although they can often be modified with software or hardware to concurrently serve more than one user. Microcomputers fit well on or under desks or tables, so that they are within easy access of users. Bigger computers like mini- computers, mainframes, and super computers take up large cabinets or even dedicated rooms.

A microcomputer comes equipped with at least one type of data storage, usually RAM. Although some microcomputers (particularly early 8-bit home micros) perform tasks using RAM alone, some form of secondary storage is normally desirable. In the early days of home micros, this was often a data cassette deck (in many cases as an external unit). Later, secondary storage (particularly in the form of floppy disk and hard disk drives) were built into the microcomputer case. 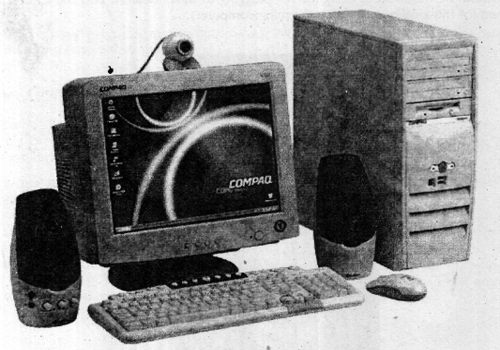 Microcomputers can be grouped into five smaller groups; the workstations, desktops, servers, laptops and notebooks, each referring to the physical usage of the machines and not necessarily the power. Workstations generally refer to machines used for intensive calculations on de signs such as architecture and buildings. Desktops generally refer to machines used by business people for word processing, spreadsheeting, accounting, presentations, etc, and are physically placed onto a desk. The laptop and the notebook are portable machines. Notebooks and laptops can work on batteries allowing the user to work with it during travel, and in places computers are not generally available. Some examples of microcomputers are IBM NetVista, Compaq Presario, HP Pavilion and so on.

A minicomputer, or colloquially mini, is a class of smaller computers that evolved in the mid-1960s and sold for much less than mainframe and mid-size computers from IBM and its direct competitors. In a 1970 survey, the New York Times suggested a consensus definition of a minicomputer as a machine costing less than 25 000 USD, with an input-output device such as a teleprinter and at least 4K words of memory, that is capable of running programs in a higher level language, such as Fortran or Basic. The class formed a distinct group with its own hardware architectures and operating systems.

When single-chip CPUs appeared, beginning with the Intel 4004 in 1971, the term "minicomputer" came to mean a machine that lies in the middle range of the computing spectrum, in between the smallest mainframe computers and the microcomputers. The term "minicomputer" is little used today; the contemporary term for this class of system is "midrange computer", such as the higher-end SPARC, POWER and Itanium-based systems from Oracle, IBM and Hewlett-Packard.

Minicomputers work well in what are known as Distributed Data Processing (DDP). That is, a company's processing power is decentralized, or distributed across different computers. An example of such computer architecture is the Client/Server model, in which end users can process at their own microcomputers. End users can also access and share the resources of the server, which usually is a minicomputer. For example, an executive could use the server to search the company's centralized database and retrieve selected data. He/she could then use a spreadsheet on his/her microcomputer to analyze the data. 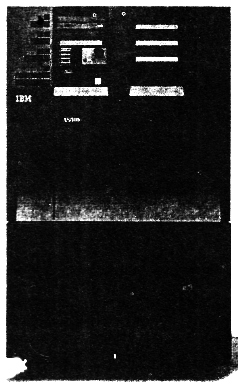 For example, large supermarkets around the world need to have their cash register send sales information to the same computer (so that the data is collected in one place). This work requires more input devices (cash registers) and output devices (screens) than the microcomputer was designed to have access to. Some organizations, operate the local supermarket using local area networks and microcomputers, but tie the various supermarkets together to the central office to a minicomputer. The minicomputer is also required to work when the entire sales people key in sales information at the same time, this requires a powerful machine that can work with all the input devices at the same time.

Minicomputers are used by medium sized business and small sites of large organizations. They are also used in factories to control automated assembly lines, manufacturing, process control, etc. where numerous equipment have to be coordinated and operating in time-critical sequence, such as a car manufacturing plant, or chemical plant, minicomputers are found to coordinate the many peripheral devices, collate and assess input from many other peripheral devices. The microcomputer is inadequate in processing power and peripheral connections to complete the work and mainframe computers are too expensive for the job to be cost-effective.

An important measure for minicomputers and mainframes is the reliability of the machine as it generally has to operate 24 hours where every minute of operation is important to the company. A minute of downtime, where the computer is not functioning correctly, is calculated in lost money for organizations. Microcomputers have not been manufactured nor warranted for critical operations and many microcomputer manufacturers explicitly state in their promotional material that the microcomputers are not designed nor intended for critical operations.

The following figure shows a typical minicomputer—AS/400. Unlike microcomputers, most minicomputers provide more than one terminal so that several people can use the system at one time. A system like this is sometimes called a multi-user system.

Mainframes have even more access to storage space and to input/output devices. To work with these extra devices mainframes also have more powerful 'processors'. This power is useful and required by large corporations who have large amounts of data to process. For example, large international banks who have millions of customer accounts to update regular will need very powerful machines to process this data. These large banks would have a mainframe maintain their customer account records (like their bank book account balance, how much they withdrew, deposited) so that the customer can turn-up at any of the branches (local bank building) to withdraw/deposit money. So a person who has a bank account in Chennai can take a trip to US, turn up to the branch in New York, to withdraw some money. 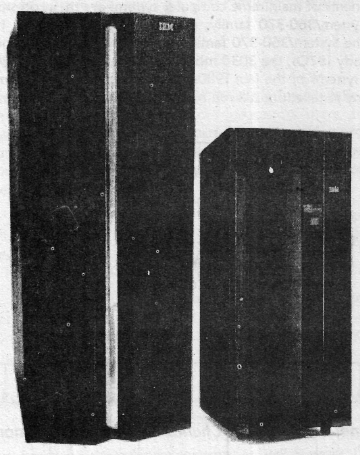 Another power of mainframes is that they are designed to connect input/output devices that span vast distances. Like the above example, to connect devices that can be as far away from each other as Chennai and New York. The powerful hardware and CPU chips that can support the above work can also be used for making complex calculations, and designs.

The most popular maker of mainframes is IBM (International Business Machines), a large Multi